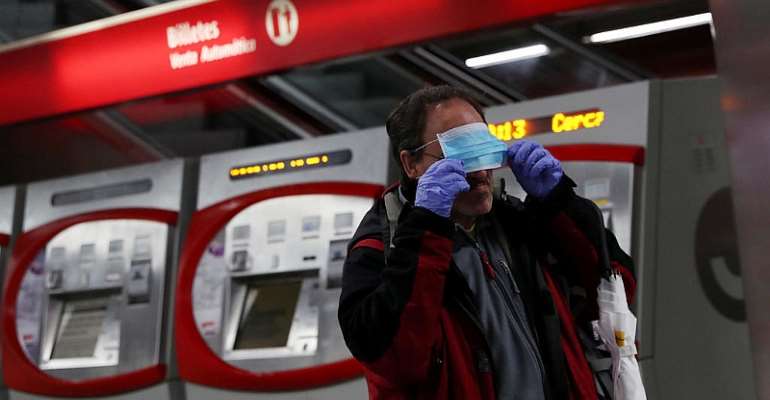 Spain slowly re-opened some sectors of its economy while most of its population is still confined indoors. Death toll rose on Sunday and dropped again today but Spain is far from victory, warns President Sanchez.

Spain, one of the countries worst hit by the coronavirus pandemic, after the United States and Italy, started to ease tough lockdown restrictions on Monday.

Some businesses, including construction and manufacturing, were allowed to reopen. But most of the population are still confined to their homes, and shops, bars and public spaces will remain closed until at least 26 April.

The daily death rate fell for three consecutive days last week, only to rise again on Sunday. But on Monday it fell again, with 517 deaths in 24 hours, putting the overall death toll over 17,000.

But Spain's Prime Minister Pedro Sanchez warned his country was "far from victory", with the lockdown restrictions for the rest of the nation's 47 million people remaining in place.

"We are all keen to go back out on the streets... but our desire is even greater to win the war and prevent a relapse," he said.

Spain's worst recession
The population has been confined to their homes for more than a month and this has put a brake on economic activity, resulting in what European Central Bank Vice-President Luis de Guindos described as “the worst economic situation since the (1936-39 Spanish) Civil War”.

Prime minister Sanchez said the decision to restart some sectors of the economy was taken after consulting a committee of scientific experts. He believes that any further winding down would depend on gains made against the virus.

"We are still far from victory, from the moment when we can pick up our normal lives again, but we have made the first decisive steps in the path towards victory," Sanchez said on Sunday.

However, some regional leaders criticised the moves, fearing a resurgence of the outbreak.

For Luis de Guindos, a former Spanish economy minister, Spain's reliance on tourism would likely leave it exposed to a worse recession than the rest of Europe.

The coronavirus is weighing heavily on the Spanish economy, with some 900,000 jobs lost since mid-March.