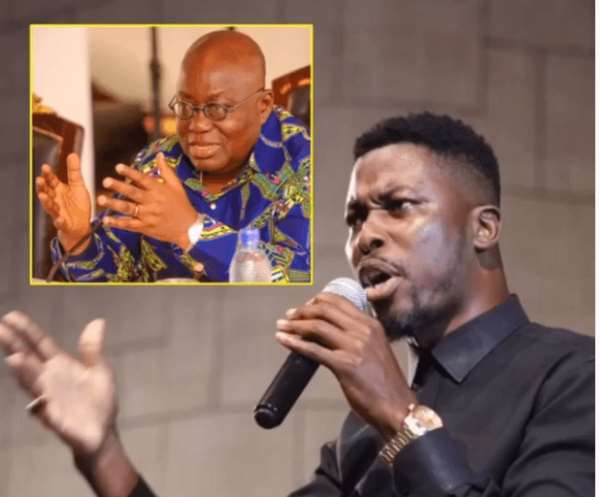 A card bearing member of the ruling NPP, Kwame A Plus has said some officials of the Akufo-Addo administration, as well as bigwigs within the governing Party, extorted, in bits and pieces, a total of $22 million from businessman Seidu Agongo with the promise to protect Heritage Bank, of which he owned majority shares, from being collapsed by the Bank of Ghana and the government.

In a Facebook live broadcast on Sunday, A Plus also revealed some NPP stalwarts, while in opposition, used the name of the party’s presidential candidate at the time, Nana Akufo-Addo, to seek sponsorship to the tune of GHS7 million from Mr Agongo.

A Plus told the President directly that “the people around you used your name to take and extort money from Seidu Agongo”, adding: “So, even if Mr Agongo stole any money from the state, half of it went to some of your appointees and some NPP officials”.

According to him, “They took to the tune of GHS7 million in the lead-up to the 2016 elections”.

“Some of your appointees were thieves in opposition and continue to be thieves in government”, A Plus asserted, stressing: “Once a thief, always a thief”.

“You can’t be that wicked to people. You went to people you claimed were corrupt while in opposition and took money from them to go and campaign. I’m not even sure the party got the money and now the government is turning around to chase the same people for corruption. Why?”, he asked.

“You kept clamouring that the man was corrupt and that you would jail him should you win power, not knowing you were taking money from him for your election campaign”, he noted.

A Plus said he would name all those who benefitted from Mr Agongo’s largesse anytime he gets the opportunity to meet the President.

“I’m waiting to meet the President one-on-one to tell him certain very sensitive things. I’ll tell him directly that so-so-and-so used your name to extort money from Seidu Agongo and others. They used your name to take money from the same people they’ve been saying are corrupt and ‘chopped’ the money and then when they came to power, they collapsed the businesses of those people and they turn around and act like they don’t know anything about it”.

“I’ve decided not to mention names now because of the love I have for President Nana Akufo-Addo but whoever dares me will have himself to blame”, A Plus warned.

In his view, some of the President’s appointees and NPP stalwarts, benefited from the same canker they were accusing Mr Agongo of.

“They mount platforms to accuse the man and others of corruption but hid under the cover of darkness to go and extort money from the same man. You’ve been wicked, extorted money from the man for your campaign, won elections and fooled Ghanaians. There are now too many thieves in the NPP. It didn’t use to be like this in the days of the Odoi Sykes, Adu Boahens, JH Mensahs, JA Kufuors and Amerley Tagoes. We are going to deal with all of them, the party doesn’t belong to anyone”, A Plus threatened.

He said: “I want the President to know that the man called Seidu Agongo owned Heritage Bank but it’s been collapsed. Even before they collapsed the bank, a lot of your appointees keep trooping to him for money”.

“Even while the ballots of 2016 were being collated before the declaration of the poll results, somebody went to take 200,000 from him. Mr President, I know all of them. How can you benefit from a crime and prosecute somebody for the same crime? If you claim the person is a criminal, how can you benefit from the crime, destroy the person’s business and profit from the same crime?” he wondered.

“You’ve extorted $22m from the man with the promise to help him, knowing very well that you couldn’t help him; you took as much as $22 million to deal with the powers that be on his behalf but the man is still suffering. Will you be happy if he’s jailed? Why did you then go to demand that money from him? Let’s assume the man did something wrong and is jailed; would you be happy having extorted all that money from him?”

A Plus also revealed that some government officials did the same thing to Dr Kwabena Duffuor with regard to uniBank, one of the nine local banks that was also collapsed, and promised to release that information on Easter Monday.

“I’ll spill all the beans. I won’t leave anything out”, he promised.

The Bank of Ghana revoked Heritage Bank’s licence on Friday, 4 January 2019, on the basis that the majority shareholder, Mr Seidu Agongo, among other things, used proceeds realised from alleged fraudulent contracts he executed for the Ghana Cocoa Board (COCOBOD), for which he and former COCOBOD CEO, Dr Stephen Opuni are being tried, to set up the bank.

Announcing the withdrawal of the licence, the Governor of the central bank, Dr Ernest Addison, told journalists – when asked if he did not deem the action as premature, since the COCOBOD case was still in court – that: “The issue of Heritage Bank, I wanted to get into the law with you, I don’t know if I should, but we don’t need the court’s decision to take the decisions that we have taken. We have to be sure of the sources of capital to license a bank; if we have any doubt, if we feel that it’s suspicious, just on the basis of that, we find that that is not acceptable as capital. We don’t need the court to decide for us whether anybody is ‘fit and proper’, just being involved in a case that involves a criminal procedure makes you not fit and proper”.

However, Mr Agongo responded with a press statement in which he said that the “not-fit-and-proper” tag stamped on him by the central bank was “capricious, arrogant, malicious and in bad faith”.

Also, the erstwhile Prof Botchwey Board of the bank, issued a statement on the matter in which it said: “Heritage Bank was by the Bank of Ghana’s own admission, a solvent bank. It NEVER received liquidity support from the Bank of Ghana. Its corporate governance record had never been impugned by the Bank of Ghana. We believe we have been done a grave injustice and a terrible precedent set that does not bode well for the future”.

Spio sues Wontumi for calling him a thief
5 minutes ago