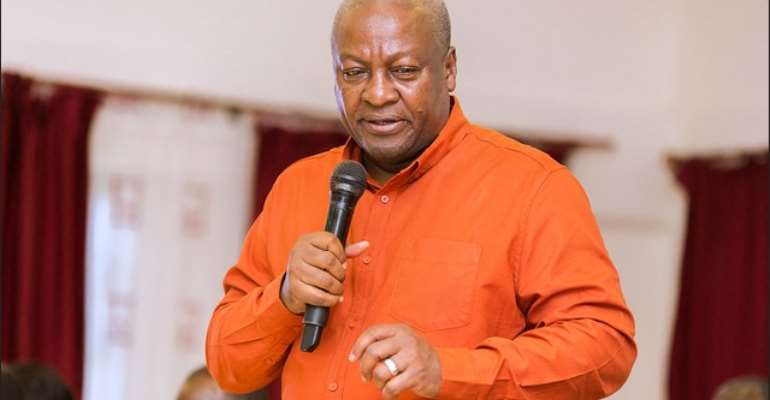 Once a tribal and an ethnic chauvinist, always a tribal and an ethnic chauvinist. I read Mr. John “Ford Expedition Payola” Dramani Mahama’s take on two weeks of National Self-Protective Lockdown, declared in a State-of-Emergency Address by President Addo Dankwa Akufo-Addo – Candidate Mahama did not even have the slightest iota of decency to mention the name of his successor in his article – and found absolutely nothing new or refreshing by way of any creative contributions to measures already taken and/or laid down by the Akufo-Addo Presidency and officially inaugurated COVID-19 National Team of Medical Experts, except a rather tacky and characteristically devious attempt to tribalize, ethnicize and invidiously regionalize the laudably concerted attempts so far being made to stem the massive tide of the apocalyptically raging Coronavirus or COVID-19 Pandemic ( See “Mahama Writes on Day 14 of Lockdown 4/12/20).

It was also not the least bit surprising that Mr. John “Kanazoe” Mahama would so brazenly and impudently expose himself for the pathological political charlatan that most Ghanaian citizens and voters have come to know the man to be over the course of approximately the last decade, a third of which period he was Vice-President and four-and-half years of which were indisputably wasted in his capacity as substantive President of the Sovereign Democratic Republic of Ghana. For example, precisely when did it occur or begin to occur to the former “Shit-Bombing” Rawlings-appointed Communications Minister that the northern-half of the country, his location of birth, was direly bereft of such major medical research establishment as the southern-based University of Ghana-hosted Noguchi Memorial Institute for Medical Research (NMIMR), and the Kumasi Center for Collaborative Research in Tropical Medicine (KCCR)?

On the latter count, we would be flagrantly remiss not to highlight the fact that long before the two above-mentioned cutting-edge research centers were established in the country, there existed the world-famous Oku-Ampofo Center for Tropical Medical Research and Treatment in Akuapem-Mampong which, by the way, was privately established and ably managed for a long time by the legendary and immortalized Dr. Oku-Ampofo, a polymathic actor and sculptor, in addition to his remarkable practice of Tropical Medicine. Officially established in 1975, the Oku-Ampofo medical research institute was called Ghana’s Center for Scientific Research into Plant Medicine (CSRPM). You would think that a politician who claims to be the one and only hope for northern-descended Ghanaian citizens would since long have recognized the dire and imperative need for the establishment of a major medical research center in the northern-half of the country, even long before Mr. Mahama was selected as the Presidential Running-Mate of the late President John Evans Atta-Mills, against the virulent protestation and, in retrospect, the sound judgment of the Rawlingses, that is, the savvy counsel of the acclaimed Founding-father of the country’s main opposition National Democratic Congress (NDC).

If the intention for writing his two-week overview of the COVID-19 Lockdown policy measures, imaginatively and progressively rolled out by Nana Addo Dankwa Akufo-Addo, was primarily aimed at strategically upstaging Fourth-Republican Ghana’s most indisputably creative, dynamic and visionary President and Statesman, then it is very obvious that Mr. John Dramani Mahama miserably failed, especially in that portion of his article where the putative inventor of the COVID-1317 Virus Complex called “Dumsor” shamelessly and acrobatically attempted to insult the intelligence of Ghanaian voters by appealing for a second nonconsecutive term of office, so that Little Dramani could smugly and imperiously continue to visit Ghanaians with more untold misery and grief.

Even so, it is incontrovertibly clear that Mr. Mahama may very well be Ghana’s best qualified Career Opposition Leader, if also because the former National Democratic Congress’ Member of Parliament for Gonja-West, in the Akufo-Addo-created Savannah Region, resplendently demonstrates that he woefully lacks the requisite vision and know-how to healthily facilitate the rapid and significant development of the country. You see, Candidate Mahama does not provide any worthwhile contributions to our ongoing national battle against the COVID-19 Pandemic, except to admonish the Akufo-Addo Administration to be up and doing what it is already doing, by the way, to the great admiration of Ghanaian citizens resident the world over; and, guess what, even a remarkable number of Nigerian nationals, resident both at home and abroad, who seem to be visibly miffed by pathological political cynics and megalomaniacs like Mr. Mahama and wish that their own President, Gen. Mahammadu Buhari, could borrow a page or two from the Anti-COVID-19 Akufo-Addo Playbook, are calling Nana Akufo-Addo the Ideal African Leader of Our Time and Our Generation.

‘We Won’t Tolerate LGBTQ+’ —Ga Chiefs back criminalization b...
9 minutes ago