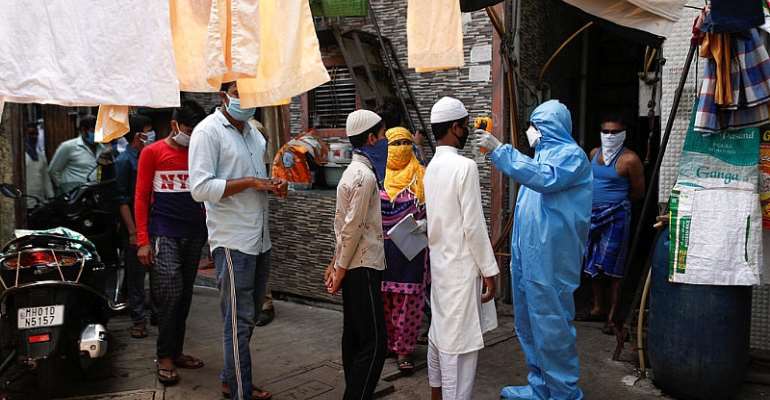 The Corona virus contagion is being used to fuel anti-Islam sentiments in India. Their victimization has not come to a halt even at a time when the whole world is fighting the pandemic.

A fortnight before the lockdown was announced on March 24, members of the Muslim missionary organization 'Tablighi Jamaat' gathered from across India and south-east Asia in Delhi for a long-scheduled event.

After the Indian government linked hundreds of cases of COVID-19 to the Muslim missionary group, angry and virulent messages have flooded social media purporting to show Muslims conspiring to spread the coronavirus.

What's more fake news fanned the sectarian flames. Some videos showed a group of Muslim men foaming in their mouths and another of a Muslim man spitting on a police officer - both seeming to indicate a plan to spread the virus that went viral on social media.

However, fact checkers found the video were old and had nothing to do with the pandemic.

Angry hashtags such as “Corona Jihad”, “Corona Terrorism” and “Islamic Insurrection” have flooded social media platforms and even mainstream television over the past week, stigmatizing an already vulnerable population.

“It looks as if we have to continuously justify our existence. This pandemic has come as another excuse to ostracize and vilify the Muslim community,” Farzana Qayoom, a civil rights activist told RFI.

Since the election of Narendra Modi and his right-wing Hindu nationalist Bharatiya Janata Party in 2014, Hindu-Muslim tensions have steadily escalated. Most recently, the country has been embroiled in protests due to the passage of the anti-Muslim Citizenship Amendment Act that saw sectarian riots in which over 50 people were killed in the capital.

The religious gathering in Delhi and that many members tested positive for Corona virus and also died could not have come at a worse time. The pandemic has only led to further victimization and marginalization.

The propaganda on television and social media has been toxic, creating more communal tension within society.

“Journalism is now endangered and what's masquerading in its name is business — with open display of bigotry and hate against Muslims and other minorities,” says political observer Zainab Sikander.

“It not only builds its viewership base by hook or crook to more advertising money but it also doubles up as a PR firm, serving the interest of the ruling BJP, to show it as the saviour of India,” he adds.

On the ground and across various parts of the country many ordinary Muslims have had to face the wrath and at times, slurs.

In the hill-state of north Uttarakhand, Muslim fruit sellers were forced to shut their shops, vegetable vendors were barred from entering residential localities in south Delhi while Muslim truck drivers were beaten up ferrying essential supplies in the north-eastern state of Arunachal Pradesh.

“At a time when unity is needed to fight against the pandemic, vested interests are out to divide this and fan hatred,” Mohammed Islam, a mechanic told RFI.

“I have filed a petition in the Supreme Court that alleges baseless allegations and fake reports. They have triggered communal antagonism and have also perpetrated hatred. This has resulted in such tendencies gaining foothold,” advocate Ejaz Maqbool told RFI.

Following the spate of reports, some regarded dangerous, India's Supreme Court directed the media to maintain a strong sense of responsibility asking it to ensure that unverified news, capable of causing panic, is not disseminated.

For long Hindu nationalists have launched dog-whistle attacks on Muslims. The pandemic has provide them another opportunity to 'other' the community.