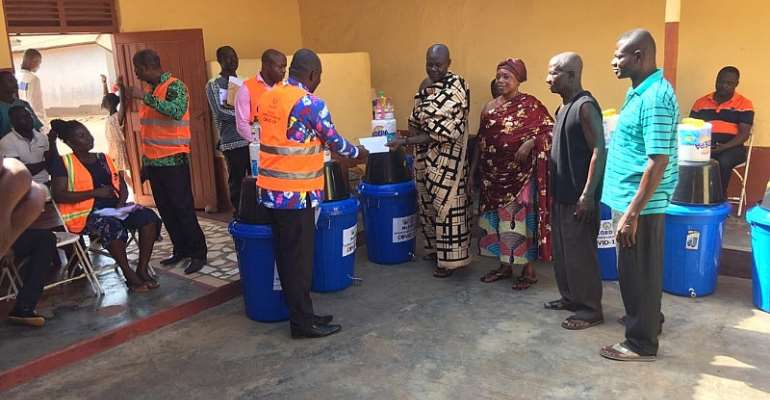 The items which were accompanied with some amount of money to each taskforce were received from the Ministry of Local Government and Rural Development.

The amount added was to enable members of the taskforces to fuel their motorbikes or be used for transportation to reach remote areas in the discharge of their duties.

The Area Councils Taskforce against COVID - 19 were formed and inaugurated weeks ago, by the District PHEC to ensure the strict adherence to precautionary measures put down by central and local authorities among other things to fight the disease at the grassroots.

The first time logistics to fight the disease were distributed, the consignment targeted the District Hospital and Health Centers as well all public places and institutions in the major towns through the Health Directorate and the Environmental Health Office respectively.

The items which is now going to the very grassroots include 70 veronica buckets and their basins, 288 of the 400ml bottled sunlight liquid soap, 200 pieces of kitchen towels, 50 of the 5 litter gallon hand sanitizers and other assorted alcohol based hand sanitizers.

Other beneficiaries to these items were all three traditional divisions in the District (Mansen (Konti), Akyempim and Akwamu) as well as all their sub palaces. The Health Directorate also received additional items to the community based health centers.

The package to the chiefs were also attached with some amounts. Theirs were from royalties paid to the District Assembly by Stool Lands.

The District Chief Executive and Chairman of the District PHEC, Hon. Emmanuel Kofi Agyeman who led the distribution splurge, thanked Nananom and the Area Councils Taskforce for their unflinching efforts in the fight against the disease. He emphasized that though the region or district has no records of the disease it is still necessary to observe precautionary measures put in place by both central and local governments to guard against it.

He advised for all to safeguard themselves through preventive measures like regular hand washing and social distancing. The DCE also seized the opportunity to brief the task force how an amount of fifty thousand cedis (GH₵50,000) sent by the government to fight the disease has been evenly distributed for the common good of the district in line with the fight against COVID - 19 by the community members.

The palaces were points of convergence for receiving the items by both the chiefs and members of the COVID - 19 Taskforce. The chiefs as well as the taskforce were very appreciative of the gesture and expressed gratefulness to the Presidents, the leadership of the Dormaa East District as well as members of the Public Health Emergency Committee.

The President of Ghana, H.E Nana Addo Dankwa Akufo Addo received a commendation for the bold decisions and proactive measures adopted so far in the fight against the pandemic. Nananom prayed for him, the country and the district. They hoped and prayed that the next item which would come from the government would be for development and not to fight anymore disease.