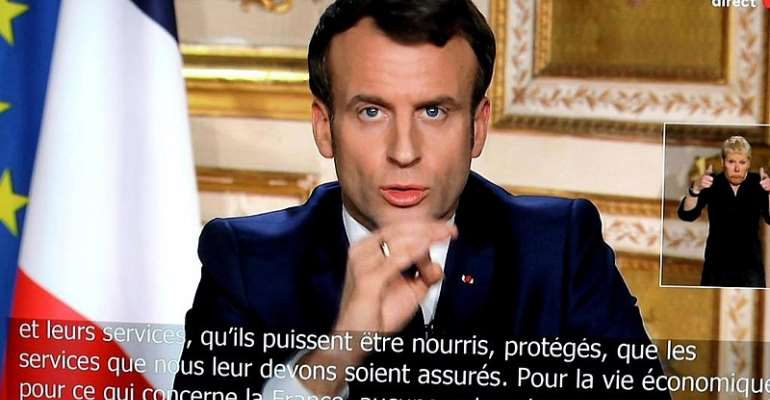 French President Emmanuel Macron is to deliver a speech on prime time television on Monday evening, his fourth address since the start of the coronavirus crisis. He is expected to outline how France will move forward in the coming weeks. Issues he is expected to address include the use face masks, the school calendar and the economy.

Macron will begin his speech at 8pm local time (1800GMT), and will refer to the recent indications that the epidemic is starting to plateau, albeit at a high level.

France on Sunday reported a lower number of COVID-19 fatalities over the last 24 hours, with 315 deaths in hospital over the last day, compared with 345 the previous day.

The health ministry said the total toll from the coronavirus epidemic, including those who have died in nursing homes, now stands at 14,393.

For the fourth consecutive day in a row, the number of patients in intensive care fell with 35 fewer patients, making a total of 6,845 people needing such treatment.

As France enters its fourth week of lock down, one of the first things many people will be waiting for from Macron is details on how much longer the confinement period will continue.

Government sources suggest the lock down will be extended beyond its current 15 April expiration date until at least the 10 May, but could be modified if the situation improves.

When will schools reopen?
Macron will be looking to warn France that an early relaxation of the lockdown could be disastrous, while reassuring people that the government has a plan to get the country back to normal.

One of the other issues covered will no doubt be the question of whether schools will reopen.

The Journal du Dimanche newspaper reported that the restrictions could continue until the end of May, with schools only reopening with the new academic year in September.

According to political journalist, Nathalie Saint-Cricq, this option is "on the table", but it is being weighed up against the economic impact it could have.

Speaking to France Info, she explained that such a move would mean many parents who could've gone back to work will be stuck trying to juggle child care options at a time when the government needs to reboot the economy.

Criticism over face masks
When it comes to the issue of protective face masks and testing, she says Macron is likely to clarify the government's overall policy when it comes to handling the epidemic in an effort to regain the public's trust, rather than go in to detail.

"It will be a delicate balancing act, of being clear and telling the truth, all while accepting that Macron doesn't have the answer to everything," Nathalie Saint-Cricq says.

"This is perhaps the price to pay for the government to regain the public's confidence in order to accompany them through this crisis."

There has been considerable criticism aimed at the Macron government in terms of its management and communication over issues such as the stocks of face masks, and whether they may have ignored possible treatments for the virus.

However, sources say Macron is not expected to issue rulings on specific questions during his speech, such as whether the wearing of masks in public should become generalised, or on tracing and testing.

Economic woes
Finally, in terms of the economy, the French public will be eager to hear how the President intends tackle "post lockdown" business activity.

France is facing its worst recession since 1945, with 30 to 40 percent of businesses closed due to the coronavirus pandemic, with the GDP expected to drop six per cent in 2020.

At the weekend, the head of France's employers' union Geoffroy Roux de Bézieux, suggested that that people will need to work harder to get the economy back up and running, implying that a rethink would be necessary in terms of working hours and paid holidays.