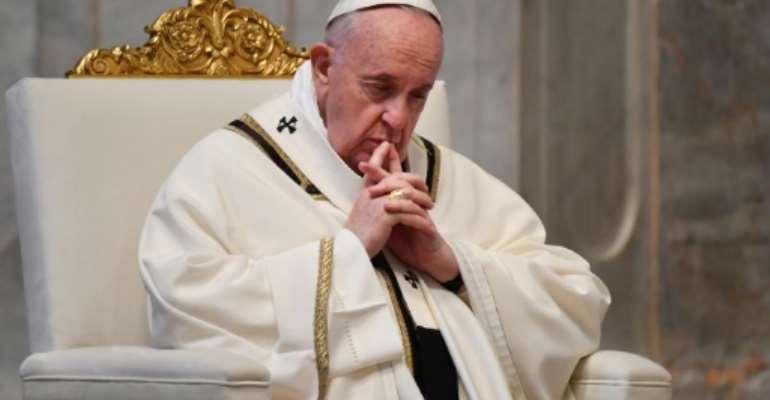 Pope Francis prayed for tens of thousands of coronavirus victims in an unprecedented livestream Easter Sunday message delivered from a hauntingly empty Vatican to a world under lockdown.

The 83-year-old pontiff spoke softly at a ceremony attended by just a handful of priests and a small choir that was spaced out across the expansive marble floor of Saint Peter's Basilica.

"For many, this is an Easter of solitude lived amid the sorrow and hardship that the pandemic is causing, from physical suffering to economic difficulties," Francis said.

The pandemic raging outside the Vatican's locked gates has killed more than 110,000 people and left billions confined to their homes.

Most of the world's 1.3 billion Catholics were in forced confinement as the pope spoke, and few of the world's churches were open on Christianity's holiest day.

In his homily, the pope called for a global ceasefire and debt relief for the poorest countries.

His message was livestreamed for the first time -- a bow to technology in the face of a new illness that has transformed society and altered the way religion is observed.

Around the globe, others followed his advice and found creative solutions.

In Britain, the Archbishop of Canterbury Justin Welby -- the spiritual leader of Anglicans -- celebrated mass with thousands of followers on a video recorded from his kitchen.

Ulloa's cavalcade halted outside hospitals as he rose to bless the sick and those caring for them.

Brazilian Archbishop Cardinal Dom Orani celebrates Easter Mass at the Christ Redeemer statue in Rio de Janeiro, where the landmark had a doctor's uniform projected onto it in honour of all the medical staff worldwide fighting the coronavirus pandemic. By CARL DE SOUZA (AFP)

Rio de Janeiro priest Omar Raposo took to a helicopter to bless the Brazilian city from the sky.

"Let's stay home, let's follow our doctors' recommendations. That is an act of charity, of devotion to life," Brandes said, in a homily that was broadcast live on TV and online.

In the United States, President Donald Trump, a Presbyterian, said in an Easter message that this year's celebration "comes during a sombre time for our nation."

Trump followed a televised service by Robert Jeffress, the leader of a Southern Baptist megachurch.

Baltimore, Maryland, Pastor Alvin Gwynn defied a state lockdown to call on parishioners to flock to his Friendship Baptist Church for his Easter service, but given fears over the coronavirus, fewer than 10 showed up.

While priests in Mexico celebrated mass in empty churches, some indigenous communities in the south defied the pandemic by holding traditional processions.

Earlier, in Seville, Spain, worshipers left wreaths of flowers outside the locked churches from where festive processions had normally departed.

A parish near the Philippines' capital Manila pasted the empty pews with family photos that the faithful had emailed to the priest.

Catholics in Syria -- where celebrations had continued in Christian quarters of Damascus despite years of agonising war -- watched the Facebook Live mass posted by the country's patriarch.

In Jerusalem, a few priests also gathered at the Church of the Holy Sepulchre -- under lockdown like the Vatican -- to pray at the spot where Christians believe Jesus was crucified and resurrected on Easter.

The pope's message was livestreamed for the first time -- a bow to technology in the face of the pandemic. By ANDREAS SOLARO (POOL/AFP)

As a solemn Easter day darkened into night in Latin America, Rio de Janeiro Archbishop Orani Joao Tempesta blessed Brazil from the city's iconic Christ the Redeemer statue, the first such ceremony since it was inaugurated in 1931.

The iconic statue had a doctor's uniform projected on it, reading "Thank You" in honor of the medical staff fighting the pandemic.

Bells rang across a still and completely silent Rome when the pope's mass began.

Francis pleaded with world leaders to forget their differences and support his appeal "for an immediate global ceasefire in all corners of the world" during a global health emergency of a magnitude not seen in 100 years.

"This is not a time for division," Francis said.

Health considerations required global powers to ease crippling economic sanctions imposed against their adversaries, he said -- a possible reference to those weighing on pandemic-hit Iran.

He called for a "reduction, if not the forgiveness, of the debt burdening the balance sheets of the poorest nations" and for European nations to show the same "solidarity" they did in the wake of World War II.

"After the Second World War, this beloved continent was able to rise again," he said.

"The European Union is presently facing an epochal challenge, on which will depend not only its future but that of the whole world."

The official toll across Europe passed 75,000 moments before Francis spoke.

The Argentine-born pontiff offered a special message of consolation to those "who mourn the loss of their loved ones (but) to whom, in some cases, they were unable even to bid a final farewell."