Covid-19: Pope uses Easter to thank frontline workers who compromise their health to save lives 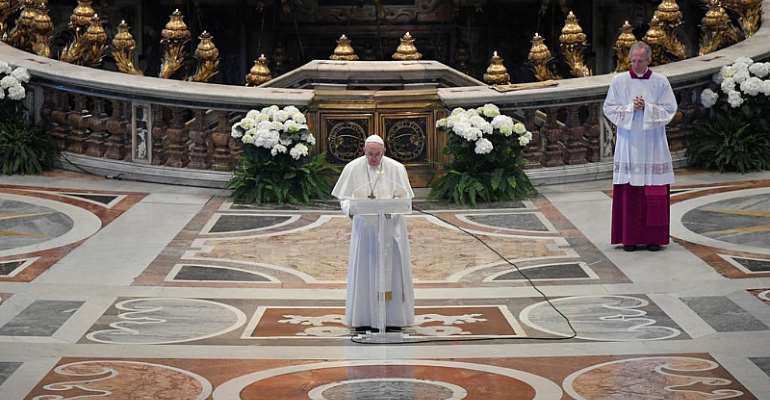 It was a very different Easter Sunday for Romans this year, one they are unlikely to forget. No one was allowed to leave their homes, not even to attend the Pope's traditional Easter Mass, due to the lockdown in place across the country.  This year like many others faithful all over the world they watched it on television or livestreamed on the Internet.

Pope Francis celebrated Easter Sunday Mass and then delivered his traditional “Urbi et Orbi” message, to the city and to the world, from inside a largely empty Saint Peter's Basilica.  With him, some of his close collaborators and a number of chosen faithful siting one per pew.

This Easter Sunday at the Vatican at the Vatican will go down in history. A huge crowd of tens of thousands of faithful would normally have turned out in a Saint Peter's Square, decked in brightly coloured fresh flowers where a band plays the Vatican anthem and a choir sings on the most joyful day of the Christian calendar, which marks the resurrection of Jesus Christ after three days.

There was none of that this year.
Outside in Saint Peter's Square, on a beautifully sunny day there were only police officers wearing protective masks patrolling the area. Inside the basilica, a solitary Pope Francis, who has celebrated all Holy Week services this year without an audience, first celebrated mass and then addressed the world from the Gates of Confession.

At this time that the world is being severely tested by the coronavirus pandemic, the words of the 83-year-old Pope resounded stronger than ever. “Indifference, self-centredness, division and forgetfulness are not words we want to hear at this time. We want to ban these words for ever!” Because the entire human family is suffering, the pope urged solidarity.

The pope's first thoughts went “to the many who have been directly affected by the coronavirus: the sick, those who have died and family members who mourn the loss of their loved ones, to whom, in some cases, they were unable even to bid a final farewell.”

Pope Francis said “this is an Easter of solitude lived amid the sorrow and hardship that the pandemic is causing, from physical suffering to economic difficulties. This disease”, he added, “has not only deprived us of human closeness, but also of the possibility of receiving in person consolation from the sacraments.”

Pope Francis expressed gratitude and affection towards the doctors and nurses who “work to the point of exhaustion and not infrequently at the expense of their own health.”

“In these weeks the lives of millions of people have suddenly changed,” he said. For many remaining at home has been an opportunity to reflect, to withdraw from the frenetic pace of life, stay with loved ones and enjoy their company. For many, though, this is also a time of worry about an uncertain future, about jobs that are at risk and about other consequences of the current crisis, the pope added.

This is not a time for indifference, the pope said, because the whole world is suffering and needs to be united in facing the pandemic. In light of the present circumstances, the pope called for international sanctions to be relaxed, since these make it difficult for targeted countries to provide adequate support to their citizens.

Saying this is not a time for self-centredness, the pope had special thoughts for Europe. “After the Second World War the continent was able to rise again, thanks to a concrete spirit of solidarity that enabled it to overcome the rivalries of the past. It is more urgent than ever, now that these rivalries do not regain force, but that all recognize themselves as part of a single family and support one another. The European Union is presently facing an epochal challenge, on which will depend not only its future but that of the whole world,” he concluded.