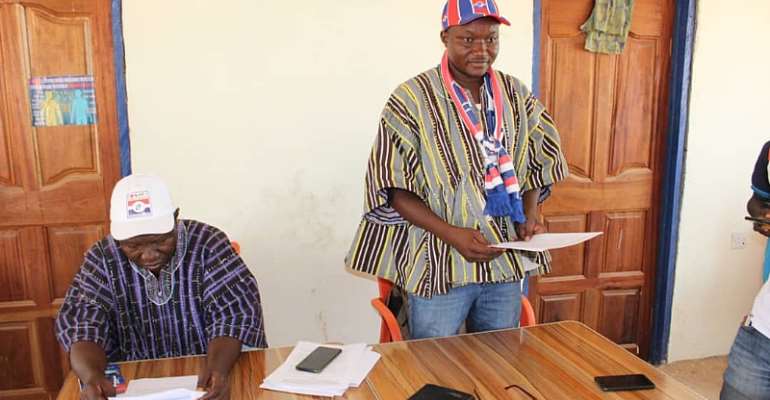 The leadership of the NPP in the Binduri constituency have downplayed claims the District Chief (DCE), Ayinga Abagri Yakubu allegedly divert Covid-19 items meant for the people to Abdulai Abanga, the party's parliamentary candidate.

The opposition NDC in the constituency at a press conference Tuesday, proclaimed it had evidence the DCE, Mr. Ayinga Yakubu diverted Covid-19 logistics from the Ministry of Local Government to the NPP parliamentary candidate who embossed his posters in them for onward distribution to the Binduri Public Health Emergency Committee.

According to the party, the allegations by the NDC is unfounded and scandalous. It said it was an attempt to discredit the benevolent gesture by Mr. Abdulai Abanga from his personal coffers.

“More disgraceful is the fact that these NDC executives didn’t provide a shred of evidence to substantiate these allegations. Any serious party worth its sought would provide evidence to prove wrongdoing by Messrs Abanga Abdulai and Ayinga Abagre Yakubu,” the NPP stated a press conference Saturday.

Read copy of statement below:
RE: PRESS CONFERENCE ON THE DIVERSION OF COVID-19 LOGISTICS TO A PARLIAMENTARY CANDIDATE OF THE RULING NEW PATRIOTIC PARTY (NPP); HON ABDULAI ABANGA BY THE DISTRICT CHIEF EXECUTIVE (DCE) FOR BINDURI, HON. AYINGA ABAGRE YAKUBU

11/04/2020
Good morning ladies and gentlemen of the media and thank you for honoring our invitation to cover this conference.

The attention of the New Patriotic Party has been drawn to a series of scandalous and unfounded allegations leveled against Hon Abanga Abdulai and Hon Ayinga AbagreYakubu , NPP Parliamentary Candidate (PC) and District Chief Executive (DCE) respectively by National Democratic Congress (NDC) Executives in Binduri on Tuesday 7th April, 2020,during a press conference on the above subject.

Ladies and gentlemen, even before we focus on the object of today’s conference, We in the NPP recognize that these are not ordinary times in the wake of the COVID 19 pandemic and as such we wish to appeal to you to bear with us on this equally important press conference.

At their last press conference, the NDC alleged the following among others:

1. The NDC alleged that Hon Ayinga Abagre Yakubu, DCE for Binduri diverted Personal Protection Equipment (PPEs) donated by the Ministry of Local Government and Rural Development (MLGRD) to the NPP Parliamentary candidate, Hon. Abdulai Abanga for onward donation to the Binduri Health Directorate. This allegation is completely false and an abysmal attempt to discredit a benevolent donation from our parliamentary candidate. More disgraceful is the fact that these NDC executives didn’t provide a shred of evidence to substantiate these allegations. Any serious party worth its sought would provide evidence to proof wrong doing by Messrs Abanga Abdulai and Ayinga Abagre Yakubu.

Ladies and gentlemen, we have provided copies of the waybills covering PPEs donated by the Ministry of Local Government and Rural Development as proof that the PPEs donated by our benevolent Parliamentary Candidate were from his own personal resources. Unlike the ignorant NDC executives who argued blindly, we speak with evidence.

Following Hon Abanga Abdulai’s donation of PPEs, there was serious backlash on the MP by constituents. The MP donated 20 boxes of Madar washing Soap to the District to help to fight against COVID -19. A large section of constituents condemned the MP’s donation describing it as not fit for purpose because it didn’t include essentials such as veronica buckets, sanitizers, nose masks etc,

This backlash compelled stooges of the MP to allege firstly on a What’sApp platform “Binduri Youth Forum” that the PPEs as donated by Hon Abanga Abdulai belonged to the Central Government and thus the DCE diverted them to the PC to make the donation. This pedestrian lie later became the subject of the NDC’s Press Conference.

The NDC is ignorant of the fact that, items from central government are received and managed by a committee, who decides how these items should be distributed. What beats our imagination is the fact that, the Hon. MP who is in the position to know better looked on whiles his executives made a mockery of each other.

2. The NDC alleged during their press conference that Hon. Ayinga Abaagre Yakubu , DCE for Binduri borrowed an amount of GHC 70,000 from the MP’s Common Fund and has since refused to repay. This allegation is a complete lie poorly fabricated to court public anger towards the DCE. There are audio recordings in circulation of an interview conducted on Source FM in which both the DCE and the MP were asked to substantiate this allegation. The DCE denied ANY allegation of borrowing money from the MP’s Common Fund. The MP, who was on the other line, couldn’t proof these frivolous allegations.

Ladies and gentlemen I assume most of you are privy to the audio recording of the interview we make reference to, however if you’re not privy to it yet do not be alarmed we have it available for you.

We want to use this medium to challenge the MP/NDC to produce evidence that the DCE borrowed money and has since refused to pay. We call on the MP and his team to produce Cheque(s) or bank transfers showing that a total amount of GHC 70,000 was drawn from the MP’s Common Fund to Hon Ayinga Abagre Yakubu as a person.

3. Again, the NDC alleged that the DCE uses his official vehicles to attend lectures for a Master’s program he pursues in Tamale. This allegation is baseless and without merit. The DCE is currently enrolled for his master’s degree via online distance learning which does not require him to physically attend lectures on campus. It is preposterous to allege that because the DCE sometimes embarks on trips over the Weekend, it amounts to abuse or misuse of office.

4. On the Issue of approval of funds to construct boreholes, the DCE stated clearly to the MP that a proposal to construct eight (8) boreholes (by the MP) is beyond his threshold and as such the law requires that such a proposal goes through a proper procurement process by way of a public tender. The MP ignored this call to follow due process and insisted that the DCE should bend the rules and approve his requests

5. Lastly, the DCE has been accused of refusing to approve funds to award educational scholarships to students under the common fund. This is a complete misrepresentation of the DCE’s position when the list of potential beneficiaries was presented to the District Assembly. The DCE and his competent team at the Assembly asked the MP to give them time to verify the list to ensure there are no duplications and also to verify that every name captured on the list is indeed a student.

This simple request is what the MP through the press conference claimed, the DCE refused to approve funds to award scholarships to Binduri students. We want to ask the NDC and the MP why they are in such a hurry especially now that all schools in the country have been closed indefinitely. Why can’t they allow the DCE and his team to do their due diligence before approving these funds?

Based on the above, it’s clear that all the allegations leveled against the DCE and our Parliamentary Candidate are completely false. Hon Kuganaab-lem should humble himself and submit to the regulations that govern how the common fund is administered. Sponsoring needless press conferences to parade lies, without a shred of evidence, ostensibly to blackmail the DCE and deceive the unsuspecting public is inconsistent of an Honorable Member of Parliament.

We wish to use this opportunity to caution the MP and those who think like him to desist from the wanton lies and propaganda going forward. We strongly support Hon Ayinga Abagre Yakubu for his insistence on probity and accountability. We are confident he will continue to protect the coffers of the District Assembly against politically expedient expenditures and ensure value for our money.

Ladies and gentlemen of the Press, thank you for your time. We appreciate the great work you do as the fourth estate of the realm and encourage you to carry out your work objectively at all times. Our people rely on you greatly for accurate and reliable information.

We encourage you to remain steadfast and subject politicians or political parties to further probe especially when they spew spurious allegations without providing credible evidence to substantiate their claims.

More NDC News
ModernGhana Links
Ashanti Region NDC holds retreat for constituency executives
2020 polls: 'We didn't go to court over pink sheets' – Former NDC MP
Election 2024; NDC needs a fresh candidate to claw back power - Dela Coffie
Calling on gov't to complete your projects is an endorsement of NPP's 'break the 8' agenda for 2024 — Stephen Atubiga to NDC
Withdraw fraudulent suspension of Salaga South Constituency Executives immediately — Concerned NDC Supporters
‘Give us our harbour or resign for being unfaithful, untruthful’ – Cape Coast NDC tells Akufo-Addo
“Even those who lost elections are thanking people, what are their problems with me inspecting projects?” – Akufo-Addo jabs NDC
We appalled by machiavellian tactics to get MCE nominees confirmed — Western North NDC
2020 polls: We could've also gone on promise spree like NPP – NDC
TOP STORIES