US coronavirus deaths top 20,000 with billions in Easter lockdown

By Laura Bonilla with Dmitry Zaks in Rome and AFP bureaus 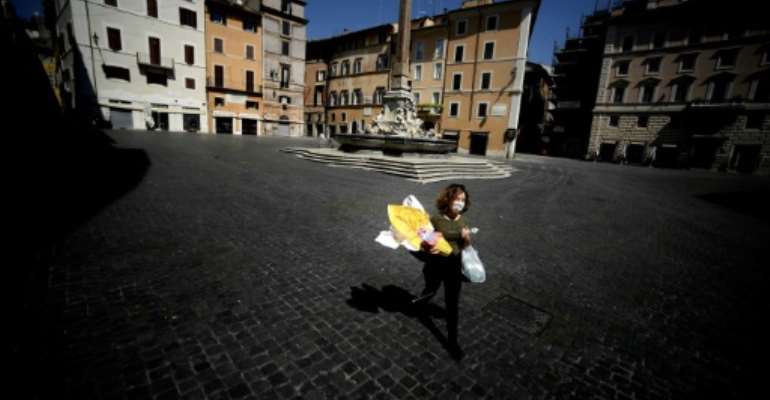 Billions of people were confined to their homes across the world as Easter weekend kicked off. By Filippo MONTEFORTE (AFP)

The United States passed the grim milestone of 20,000 coronavirus deaths Saturday as huge swathes of the globe celebrated the Easter holiday weekend under lockdown at home.

The outbreak has now claimed the lives of at least 20,071 people in the US, which leads the world in deaths and in the number of declared infections -- at least 519,453, according to a tally maintained by Baltimore-based Johns Hopkins University.

Italy, the hardest-hit country in Europe with a population a fifth the size of the US, was also approaching the bleak marker, with 19,468 confirmed virus fatalities.

Hopes began to rise in Western Europe and heavily infected parts of the United States that the pandemic was peaking, however, with many looking to China's Wuhan, the disease's original epicenter, where officials were lifting stay-indoors restrictions and life began to return to normal.

Schools in hard-hit New York city will remain closed until September to curb the spread of the virus. By Johannes EISELE (AFP)

Churches were expected to be empty on Easter Sunday, the climax of Holy Week for the world's two billion-plus Christians, with congregations shuttered at home by global stay-at-home directives aiming to stem a pandemic that has infected 1.7 million and killed more than 100,000.

Pope Francis was due to livestream his Easter Vigil from an empty St Peter's Basilica later Saturday, after he presided over a Good Friday service -- also with no attendees -- to kick off the weekend.

Pope Francis was due to livestream his Easter Vigil from an empty St Peter's Basilica after he presided over an empty Good Friday service to kick off the holiday weekend. By Vincenzo PINTO (AFP)

In a call to an Italian television show Friday, he extolled doctors and nurses battling to confront the pandemic.

They "died on the front lines, like soldiers, who have given their lives out of love," he said, according to the Vatican.

The pontiff was praised by Italy's prime minister Giuseppe Conte for his "gesture of responsibility" to observe Easter in private.

"His words, although spoken far from Saint Peter's Square, which was wrapped in an unreal silence, have reached everyone," said Conte.

Worshipers in Rome stocked up on traditional Easter cakes ahead of the weekend, some piling them onto scooters outside of grocery stores, eager to maintain parts of the holiday tradition.

Madrid Civil Protection paramedics in full protective gear wheel a homeless man suspected of being infected with the novel coronavirus in Madrid on April 11, 2020. By OSCAR DEL POZO (AFP)

In the United States a handful of priests and pastors snubbed rules and medical advice and risked arrest announcing they would hold public services in their churches on Sunday.

But most were putting services online, and some were innovating with "drive-in" blessings -- though that also risked enhancing the spread of the virus.

Meanwhile the hardest-hit countries of Europe, and the centers of infection in the United States -- New York and New Orleans -- were seeing signs that infection rates were levelling off.

Numbers out of Spain offered a shred of hope Saturday: 510 new deaths, a dip in fatalities for the third day in a row.

Official number of deaths linked to the coronavirus around the world, as of April 11 at 1100 GMT. By Simon MALFATTO (AFP)

Newly-reported coronavirus deaths in France fell by one-third from Friday to 635 on Saturday.

"A very high plateau for the epidemic appears to have been reached but the epidemic remains very active," said French health official Jerome Salomon.

"We must absolutely remain vigilant," he added.

Italy meanwhile said the number of daily deaths was starting to level off -- though the government resisted pressure to lift its lockdown, extending confinement measures until May 3.

But Britain on Saturday recorded its second highest daily toll, as virus-stricken Prime Minister Boris Johnson made "very good progress" after being released from intensive care, a spokeswoman said.

Spain reported a drop in new deaths for a third consecutive day, offering a glimmer of hope the peak may have passed. By PIERRE-PHILIPPE MARCOU (AFP)

Although global infections stand at 1.75 million, according to an AFP tally of official counts, the real number is thought to be much higher, with many countries only testing the most serious cases.

In New York and New Orleans, hopes were that a slowdown in the number of new infections, deaths and hospitalizations is pointing to a leveling off in the crisis.

New York City Mayor Bill de Blasio and the state's Governor Andrew Cuomo and were involved in a public disagreement over reopening the city's schools.

De Blasio announced that classrooms would remain closed until the start of the school year in September, prompting Cuomo to snap back at his daily news conference that it wasn't the mayor's call.

"We may do that, but we're going to do it in a coordinated sense with the other localities," Cuomo said, claiming authority over the matter.

Many experts and the World Health Organization are cautioning countries against lifting lockdown measures too quickly.

WHO chief Tedros Adhanom Ghebreyesus warned Friday that jumping the gun could lead to a "deadly resurgence" of the novel coronavirus, known as SARS-CoV-2.

From the crowded slums of Mexico City, Nairobi and Mumbai to conflict hotspots in the Middle East, there are fears that the worst is yet to come for the world's poorest.

With China already ending its once-severe lockdown in Wuhan, US President Donald Trump said this week that the disease was near its peak in the United States and he was considering ways to re-open the world's biggest economy as soon as possible.

"But you know what? Staying at home leads to death also," Trump said.