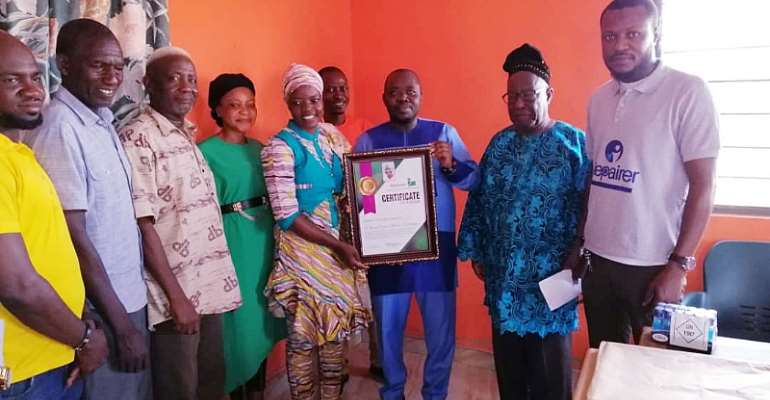 The Executive Director of Shekhinah Clinic for the Poor and Destitute, A. D. Mariama has expressed appreciation to the Voiceless Media and Consult for recognising the wonderful works of the late Dr. David Abdulai Fuseini (Dr. Choggu).

The Voiceless Media and Consult Awards, which was initiated to bring attention to the good works of individuals and organisations who bring about positive change and development in our various societies, presented a Posthumous Award to the late Dr. Choggu on March 21, 2020.

The late Dr. Choggu, who was a Medical Doctor, worked in several hospitals in Ghana but later resigned and went back to the North to offer Humanitarian services. He cared for the sick and almost all mentally challenged persons on the streets of Tamale, at no cost.

It is at the backdrop of this that the Voiceless Media and Consult, through its novel awards scheme, recognized him posthumously at the Headquarters of “Gub Kati Mali” society in Tamale.

A.D. Mariama, wife of the late Dr. Choggu, in a letter addressed to the Managing Director of the Voiceless Media and Consult, expressed her profound gratitude and appreciation on behalf of her late husband.

The posthumous award package included a colourful Citation and a cash amount of Ghc2,000. CEO of Repairer Foundation, Dr. Ibrahim Anyars Imoro, as part of the award, also pledged to support the Shekhinah Clinic for the Poor and Destitute by way of sponsoring one Mental Health student every year, to go and support the Clinic.

She expressed the faith that the late Dr. Choggu, father to the fatherless who served humanity till his sad demise on 2nd October 2016, would be at peace knowing that he has been appreciated in some way after his death by his own people.

Madam A. D Mariama, on behalf of her late husband, staff and beneficiaries of the Shekhinah Clinic, thanked the Managing Director and management of Voiceless Media and Consult for the award.