By Philippe ALFROY with AFP bureaus 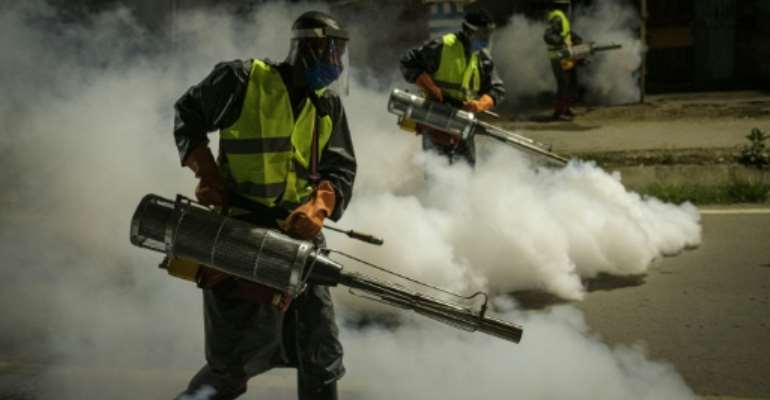 Coronavirus has since spread to 52 African countries, but despite a steady rise in confirmed cases, the continent continues to lag behind the global curve for infections and deaths. By Yasuyoshi CHIBA (AFP)

When Africa's first case of coronavirus was detected in Egypt in February, the rest of the continent prepared for the brunt of a pandemic that has engulfed Europe and spread to the United States, infecting more than 1.6 million worldwide.

Health experts warned of the devastation the deadly virus could cause in Africa, where most hospitals are desperately short of equipment and trained staff.

Coronavirus has since spread to 52 African countries, but despite a steady rise in the number of confirmed cases, the continent continues to lag behind the global curve for infections and deaths.

Still, the World Health Organization last month warned Africa faced a dramatic evolution of the pandemic even as governments imposed restrictions to help curb the spread. The continent appears poorly equipt to manage a major health crisis and is struggling to test enough to monitor virus cases.

Where does Africa stand?

To date the novel respiratory disease has infected more than 12,800 people on the continent and killed at least 692, according to a tally compiled by AFP.

Only the Comoros archipelago and the tiny kingdom of Lesotho have not yet detected any cases.

The WHO says the spread of COVID-19 outside cities into rural parts of Africa is a concern. By SUMY SADURNI (AFP)

South Africa is the worst-affected country, with over 2,000 confirmed cases and 24 recorded deaths so far -- well behind the more than 871,000 cases and 71,000 deaths counted in Europe to date.

Experts, however, warn that the tide is rising.

"During the last four days we can see that the numbers have already doubled," said Michel Yao, the World Health Organization (WHO) Africa's emergency response programme manager.

"If the trend continues... some countries may face a huge peak very soon," Yao told AFP.

WHO Africa Director Matshidiso Moeti echoed the concern, adding that the spread of COVID-19 outside major cities opened "a new front in our fight against this virus".

Possibly the greatest question mark in analyses of coronavirus in Africa, compounded by a global lack of testing capacity.

Despite a donation of more than one million coronavirus testing kits by Chinese billionaire Jack Ma, most African countries lack the equipment needed to detect the disease.

South Africa -- with the most advanced healthcare system in sub-Saharan Africa -- has been on lockdown. But it has so far only managed to test around 73,000 people. By MARCO LONGARI (AFP)

South Africa -- which has the most advanced healthcare system in sub-Saharan Africa -- has so far only managed to test around 73,000 of its 57 million inhabitants.

"This is way too low for the kind of challenges South Africa is facing," said the country's Health Minister Zweli Mkhize, who is aiming to scale up to 30,000 tests per day.

Nigeria, Africa's biggest economy, has only carried out 5,000 coronavirus tests to date for a country of 190 million people.

"The testing system is quite overloaded," admitted a doctor working at a private clinic in Lagos, who asked not to be identified.

Inability to test for the virus has forced several countries to work with vague and sometimes misleading estimates.

Kenya, for instance, has predicted its number of coronavirus cases to reach 10,000 by the end of April.

Ten days into the month, the number of detected infections remained lower than 200.

"The reason is we have not gone to do community-based testing," explained the Director General of Kenya's health ministry, Patrick Amoth.

"So we still stand by our earlier projections. We don't know what is going to happen."

The head of the Africa Centres for Disease Control and Prevention, John Nkengasong, admitted that Africa's coronavirus statistics were far from "perfect".

"We just lack the means," he told AFP.

But Nkengasong also dismissed claims that a high number of infections had slipped under the radar, pointing out that hospitals "would be flooded with people" if that was the case.

The delayed spread of coronavirus gave African countries some leeway to roll out the same measures implemented in Europe to stem the disease.

Governments across the continent reacted ahead of time, closing borders and imposing lockdowns and curfews when just a handful of cases had been detected.

Those measures have been tricky to enforce in impoverished and densely populated neighbourhoods, where houses are overcrowded and most survive off informal work -- making it almost impossible to remain home.

The WHO's Moeti cautioned that it was "too early to say" whether anti-coronavirus measures were slowing the epidemic in Africa.

Meanwhile, South Africa's President Cyril Ramaphosa said earlier this week that there was "sufficient evidence" to show that a nation-wide lockdown was "working".

Has Africa had enough time to prepare?

The time gained by African governments could be offset by a lack of means.

"There is a severe shortage of treatment facilities for critical cases of Covid-19," said a WHO statement.

There are barely five intensive care unit beds per one million people in Africa, compared to 4,000 in Europe, according to the organisation.

Public hospitals only have 2,000 medical ventilators between them to serve the whole continent.

Still no one dares make any predictions on the proportions the novel coronavirus could reach in Africa.

The WHO noted that 31 countries on the continent had less than 100 confirmed cases and believed "containment was possible".

Yet the threat remains.

"COVID-19 has the potential to cause thousands of deaths," said the WHO's Moeti. "To also unleash economic and social devastation."