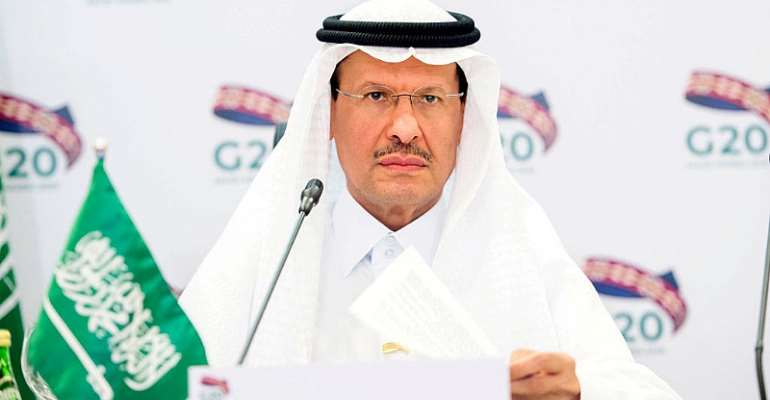 G20 Energy ministers were unable to agree on reducing oil production at a virtual summit organised by Saudi Arabia to address a drop in global oil demand due to the coronavirus pandemic, after the OPEC oil cartel agreed on Friday to cut as much as ten million barrels a day.

The statement from Friday's virtual summit of G20 energy ministers made no mention of cuts in output. Instead, it pledged to ensure “market stability” for oil, amid the Covid-19 pandemic.

"Our global energy systems, from producers to consumers, is in uncharted territory and it is our responsibility to find the path forward," Saudi Energy Minister Prince Abdulaziz bin Salman told the gathering.

The oil market was already oversupplied in early March when Russia and OPEC failed to agree on output cuts. In reaction, Saudi Arabia said it would increase output and reduce its selling prices, sparking a global pricing war.

Since then, the coronavirus pandemic has crashed oil prices, with global travel grinding to a halt. The price of crude is down by over 50 per cent since the start of the year.

While low oil prices help consumers and businesses, the current price is below the cost of production for many countries and companies, already strained by the global pandemic.

G20 does not officially commit to cuts
"We commit to ensure that the energy sector continues to make a full, effective contribution to overcoming Covid-19 and powering the subsequent global recovery," said the G20 statement. "We commit to take all the necessary and immediate measures to ensure energy market stability."

On Friday OPEC made a deal with some non-OPEC countries to cut output by ten billion barrels a day, or ten per cent of global production, in May and June, followed by a gradual reduction in cuts until April 2022.

The G20 meeting was expected to seal the deal more widely with non-OPEC countries, including Mexico, the United States and Canada.

But there was no sign that Canada, the world's fourth largest producer, had committed to specific cuts

While the US is not in the OPEC, it supports reducing supply to stabilise prices, as the oil price crash has caused thousands of job losses as the virus outbreak is causing a record rise in unemployment.

Will cuts work?
These cuts may not be enough to offset long-term loss in demand for oil around the world.

“Every economic sector has been impacted by this silent beast," said OPEC Secretary-General Mohammed Barkindo said at the start of the meeting on Friday, referring to Covid-19. "This is clearly evident in global oil. Every producer, many of whom are developing nations, has been impacted; no-one is immune."

Some analysts say a cut of 10-15 million barrels per day is enough to prop up oil prices in the short term, and helps to reduce strain on crude storage facilities.

The impact of the deal will not be seen until after the Easter weekend, as global oil markets are closed.