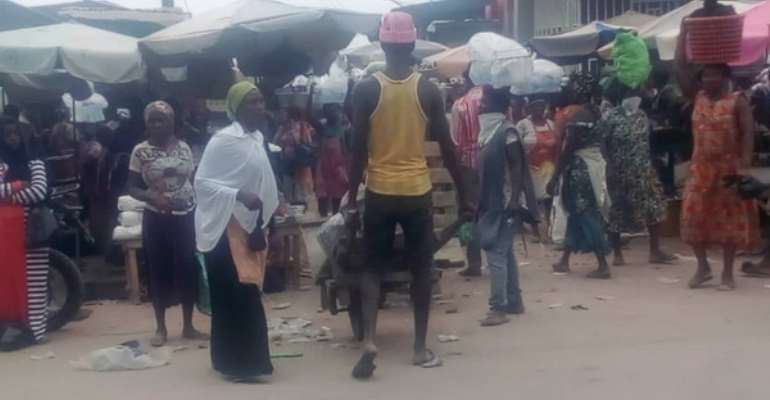 There were chaotic scenes Friday morning (Good Friday) outside a satellite market created by the Awutu Senya East Municipal Assembly at the Datus Park area near the Kasoa new market in the Central Region.

This was when members of the assembly’s taskforce began ejecting traders selling outside the satellite market close to the main Kasoa-Bawjiase road, thereby forcing them (traders) to run helter-skelter as they (taskforce members) moved in to ensure sanity in the area.

The taskforce members were reported to have seized some of the traders’ wares and destroyed the structures they had mounted to conduct business.

The traders had moved to the side of the road following the closure of the new market by the municipal assembly for non-compliance with Covid-19 social distancing protocols.

The exercise created both vehicular and human traffic, a fertile ground for people to contract the coronavirus disease.

According to the traders, they were compelled to sell along the street outside the (satellite) market since the place was too small to contain all of them.

“We did not have a choice but to come outside the satellite market since Datus Park is too small for all of us. The assembly said because we did not adhere to the social distancing protocol they were closing the new market. The place (satellite) would have been worse if we had all gone into it,” Victoria Owusu-Ansah, a trader told the Daily Graphic.

She alleged that the taskforce members, who had used brute force to eject them, took away 15 crates of eggs she had gone to buy to sell.

A bread seller who gave her name only as Alice said a taskforce member took away four loaves of bread, valued at GH¢10 each.

“I was lashed on my back by one taskforce member who took one of the bread, broke a piece and ate it, and then took four others away,” she alleged, adding that she was afraid of contracting the coronavirus that was why she decided to sell along the street outside the new market, adjacent to the satellite market that had been created.

Another trader, Auntie Ekua, said because of the congestion at the satellite market, there was so much heat at the place, and so “I had to come out to sell to survive because my husband is at home at the moment observing the lockdown”.

She said the assembly should have allowed them to remain in the new market which was spacious enough instead of creating the satellite market, which was too small for the large number of people who did business in the area.

However, the Awutu Senya East Municipal Chief Executive, Mr Michael Mensah, told journalists that the assembly had created satellite markets at Ofaakor Akwele and the Zion School Park to accommodate all the traders, and so did not understand why they should leave the one at the Datus Park and trade by the roadside.

He denied the allegation of use of brute force against the traders, and blamed persons who were not regular traders at the place for the spill over on to the road.

“No police or military has brutalized anybody, it is the taskforce that would order you to move and if you are reluctant …we would ensure that you move,” he said.

Asked if that warranted assault as alleged by some of the traders, he said: “it was not assaulted but compliance order because if you put the item here we would put it somewhere else”.

Mr Mensah said the traders were not being prevented from selling but were only asked to move to any of the satellite markets and not outside those markets where others were obeying the protocols.

“From day one when we took the decision that we were closing the markets we all sat down and agreed that we should alternate and shift the sale of the produce the traders sell.

“The problem has been with strangers coming from far and near. As for them, they do not respect the market queens …and come here to breach the social distancing protocol,” he said.

The assembly announced last Wednesday that it was closing both the Kasoa old and new markets due to the failure of the traders to abide by the social distancing protocols. It however, named places traders could go and sell on market days; Tuesdays and Fridays.