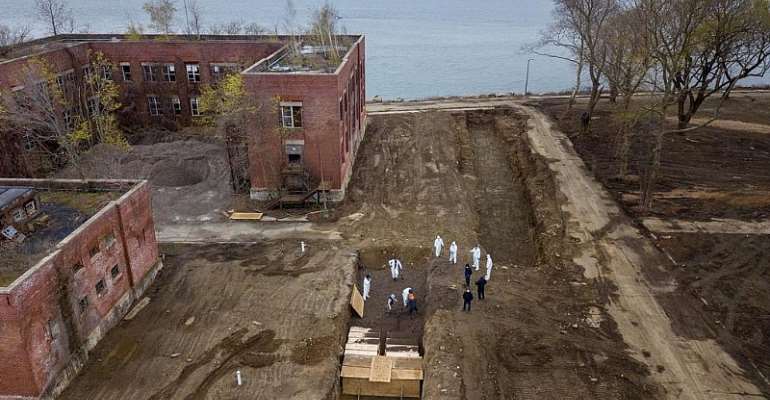 US health officials made cautiously optimistic noises about the coronavirus despite a jump in deaths Thursday, as falling hospitalization rates hint at a turning point in the battle against COVID-19. Meanwhile, New York, the US epicenter of the illness, has trouble finding enough place to bury its dead.

Overwhelmed with the sudden rush of Covid-19 victims, the office of New York City's Chief Medical Examiner said in a statement that bodies of “unidentified and/or unclaimed” victims of the disease will be put in a “temporary storage” for a period of up to 14 days.

The bodies will be stored in a facility on Hart Island in The Bronx, a public cemetery with over 1 million graves that is maintained by the US Department of Corrections.

Final stop
According to the website of The Hart Island Project (HIP) the burial site was the final stop for New York's “indigent” population: homeless, stillborn babies, early victims of the Aids epidemic, the “unclaimed,” the poor, and the otherwise forgotten by the city government and the site has mass graves which, according to HIP "hold coffins for up to 150 adults or 1,000 babies."

The Department of Corrections pays inmates of the notorious Rikers Island Correctional Facility 1 US$ per hour to handle the area's many bodies, generating rumors that Covid-19 victims were handled by them as well.

New York mayor Bill de Blasio refused to comment on the rumours and a video produced by HIP that shows recent burials at the island din which several people dressed in white protective clothes are seen dealing with the bodybags.

Cautious optimism
Meanwhile, US President Donald Trump's top pandemic advisor Anthony Fauci warned that America cannot be reopened overnight "due to the threat of further waves of infections," but said it could be up and running again by the summer months, providing citizens “adhere to social distancing guidelines” in place throughout April.

His comments came as New York Governor Andrew Cuomo struck a similar tone of cautious optimism despite the state reporting a record single-day death toll for the third time this week Thursday.

Cuomo said COVID-19 had claimed the lives of 799 New Yorkers in the past 24 hours, bringing the state's death toll to more than 7,000 and outdoing the previous high of 779 announced on Wednesday.

He added, though, that curve was flattening because of social distancing orders.

"We had a 200-net increase in hospitalizations, which you can see is the lowest number we've had since this nightmare started," Cuomo told reporters, adding that intensive care admissions were also at their lowest yet.

The COVID-19 death toll in the US leapt to more than 16,200 Thursday, according to a running tally by Johns Hopkins University, from well over 450,000 confirmed cases.

Truth in numbers
In an apparent attempt to boost confidence, Trump, using a new calculation model proposed by the Institute for Health Metrics and Evaluation (IHME) has revised the US overall Covid-19 death toll from 93,000 to 82,000 and then 60,000.

The model, which is considered too optimistic by some states, suggested the United States will reach its peak number of confirmed cases this Easter weekend.

America's top doctor, Surgeon General Jerome Adams, told the CBS television network that spread of the virus was slowing adding that “the coming 30 days are crucial.”

Hottest Photo Reports
Catch up with all the political quotes from our politicians.
Advertise here
More Europe
ModernGhana Links
French honey harvest halved in 'worst year ever' for beekeepers
French oil giant Total covered up climate risks 50 years ago: report
Bataclan survivors recount 'chatting' with attackers during the assault
Maestro Messi strikes twice to lead PSG's victorious fightback against RB Leipzig
French study looks into the pesticide risk of people living near vineyards
Former president Nicolas Sarkozy to provide testimony in polling fraud case
No one got out of the Batalan untouched - not even the survivors
French feminists take on Miss France beauty pageant for discrimination
Fuel hike headache for Macron as ministers vote on 2022 budget
TOP STORIES