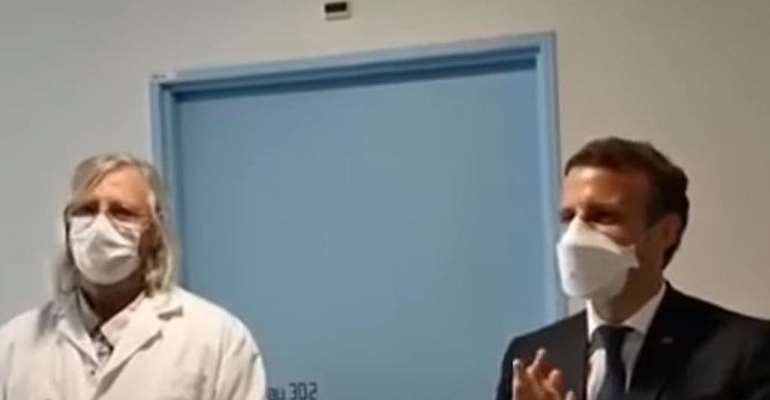 President Macron has held lengthy talks with Pr. Didier Raoult, the  French doctor who claims a derivative of an anti-malaria drug is a cure for patients with coronavirus.

Macron made a surprise visit on Thursday evening to the Mediterranée Infection Foundation in Marseille, where Raoult is based.

Pr. Raoult combines hydroxychloroquine with an antibiotic, azithromycine, and uses it on Covid -19 patients before their symptoms necessitate admission to intensive care units. Hydroxychloroquine is a derivative of the anti-malaria drug chloroquine.

On Friday, Raoult published the conclusions of his latest study on the website of his research institute in Marseille. He had already shared the information with Macron on Thursday evening.

The conclusion states that “hydroxychloroquine, combined with azithromycine, administered immediately after diagnosis is an effective treatment, without danger, against Covid – 19”. According to the website the treatment was used for at least 3 days on 1061 Covid – 19 patients.

But the full study has not been published and it did not appear to include a control sample using a placebo.

Previous small scale studies conducted by Pr. Raoult were deemed unconvincing by fellow scientists because they failed to prove that patient recoveries were due to the treatment received.

France's Scientific Council, which advises the government on the Covid-19 response, has cited this lack of proof as the basis of its decision not to approve the use of hydroxychloroquine on Covid-19 patients unless they are seriously ill in hospital.

However Raoult maintains that, in a health crisis, the normally lengthy clinical trial process should be curtailed, pointing out that the drug is already on the market for use against other diseases.

Raoult's position has divided the medical and scientific world.

He is seen by some as a trailblazing practitioner, ready to stand up to academic researchers who refuse to deviate from a rigid testing procedure. An online petition set up by France's former health minister, cardiologist Philippe Douste-Blazy, has garnered hundreds of thousands of signatures.

Others say he is motivated by a thirst for publicity and glory.

Is Macron a fan?
Among Raoult's high profile supporters is Mayor of Nice, Christian Estrosi, who recovered after being treated by Pr. Raoult in Marseille.

Estrosi, who is a member of the right wing LR party, praised Macron's decision to engage with Pr. Raoult. “That's what you expect from a wartime leader: not to just surround yourself with advisors … but to be capable to judge for yourself by seeing the reality on the ground for yourself”, he told BFMTV.

Pr. Raoult has already met President Macron, at the Elysée Palace in early March and the two men have been in contact since.

Le Figaro newspaper says that Raoult phoned Macron's wife Brigitte when one of her friends was admitted to his hospital in Marseille.

However a presidential official insisted that Thursday's meeting between the two men did not signal any kind of “recognition” of the professor's method.

Macron, he said, was keen to consult widely before another address to the nation scheduled for Monday.

Meanwhile, the French pharmaceutical company Sanofi announced on Friday that it is to donate 100 million doses of hydroxychloroquine to around 50 countries, to be used in the treatment of Covid -19 symptoms.

The company said it had increased its production of the drug by 50 per cent in response to “growing demand from governments around the world.”