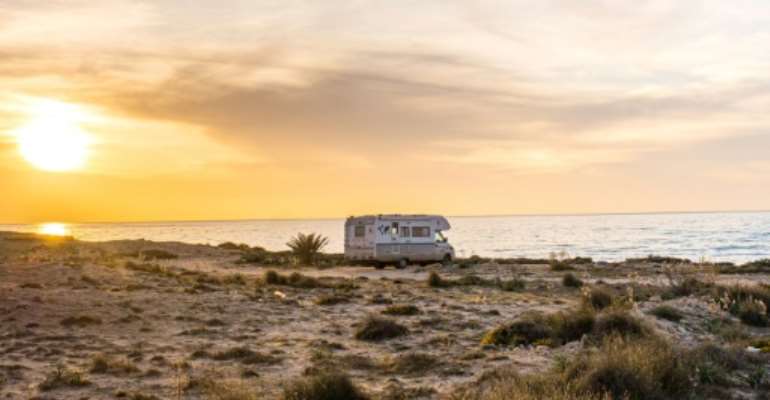 The Laurent family's caravan is seen parked on the Tunisian island of Djerba. The family rented a house on the island a few days before Tunisia imposed strict movement restrictions in a bid to slow the spread of the novel coronavirus. By - (HERE WE ARE WORLD/AFP)

As the novel coronavirus stops globetrotters and other adventure travellers in their tracks, one French family of nomads is waiting out the lockdown on a Tunisian island in the Mediterranean.

Bastien and Audrey Laurent, together with their two children, aged seven and nine, sold up their possessions and have been on the road since 2017.

Now, they don't know when they'll be able to leave the southern Tunisian resort island of Djerba.

The family rented a house a few days before Tunisia imposed travel restrictions on March 22 in a bid to slow the spread of the virus.

Tourists have left Djerba and home comforts are basic, but to compensate the turquoise waters of the Mediterranean extend as far as the eye can see.

"It's magnificent. Honestly, there's nothing to complain about," Audrey said.

As the novel coronavirus began to emerge in Europe, the Laurents were visiting the North African country at their own pace, from the hot springs of the coastal town of Korbous to the wild beaches of the Kerkennah islands and the gateway to the Sahara.

They arrived in Tunisia in mid-January after travelling through Italy. "It was still at the very start of the epidemic," Audrey said.

But as the virus spread, measures started to get stricter: Tunisian authorities halted maritime passenger arrivals, banned prayers in mosques and imposed a quarantine period on all those who had recently arrived from abroad.

Tunisia has officially declared over 600 cases of the COVID-19 illness, including 25 deaths, since reporting its first case at the beginning of March. 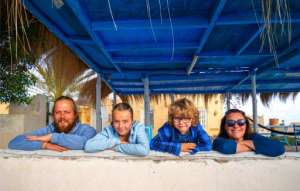 Bastien and Audrey Laurent and their two children, aged seven and nine, have been on the road since 2017. By - (HERE WE ARE WORLD/AFP)

"We decided to stop (travelling) before the government imposed a lockdown," Audrey said, adding that the family didn't want to run the risk of being asymptomatic carriers of the virus and spreading it to remote areas.

"We are the first to extol the virtues of travel but you have to know (when) to stop," she added.

They decided to go back to Djerba and wait it out there, even as thousands of foreigners in Tunisia took repatriation flights home. Others are still trying to leave.

The adventure-hungry family is far from alone -- across the world, travellers who would usually be sharing updates on social media have seen their trips grind to a halt.

Some are trying to assist fellow nomads, with one pair in Europe helping travellers stranded in caravans find a place to settle temporarily.

But for those like the Laurents, who earn money from the sale of photos, videos and articles from their journeys, the pandemic has disrupted more than just their itinerary.

"The nomadic way of life is going to get complicated, including economically," Audrey said.