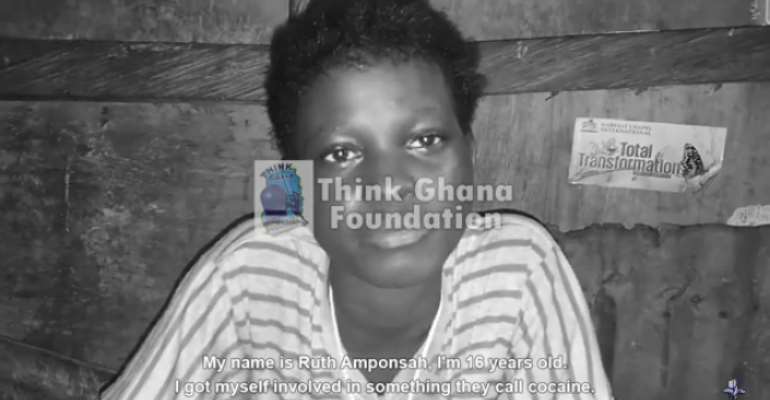 Many people associate cocaine with the 1970s and 1980s. But that perception is very wrong. Cocaine is still alive and well on city streets. Even worse, it is leading to a large number of deaths every year.

According to the WHO, More than 4 million people die each year due to drug overdose and the harmful use of Alcohol. Almost 11 million people inject drugs, of which 1.3 million are living with HIV, 5.5 million with hepatitis C, and 1 million with both HIV and hepatitis C. Deaths involving cocaine doubled between 2015 and 2019 to their highest ever level, while the numbers involving new psychoactive substances returned to their previous levels after halving in 2017.

In Ghana, cocaine is the 3rd most abused drug, coming right after Marijuana and Tramadol. Other common drugs on the streets include; codeine, ecstasy, DMT and even crystal meth which is all sold in the country. It will surprise you to know the ages of some of those who indulge in these vices.

This is the story of Ruth, the face of the cocaine epidemic. She grew up in Accra, where she attended primary school, but tragedy befell her when she lost her parents. Life became unbearable for her. She later found new friends who introduced her to drugs. She could be your child or the kid next door.

This is her story:

In a study of cocaine abusers in treatment in 2007 that was published in Substance Abuse Treatment, Prevention and Policy, close to 78 percent were poly-drug abusers, meaning that they abused other drugs in tandem with cocaine. Childhood trauma and high levels of stress during adolescence can increase the likelihood of someone turning to drugs for potential relief.

Self-medication for underlying medical or mental health issues may also lead to substance abuse and dependency, as the National Alliance on Mental Illness (NAMI) estimates that over 50 percent of all those who abuse drugs may also suffer from a simultaneous mental illness.

Effects of the Drug?

Contraction of infectious disease, such as HIV, hepatitis B, or hepatitis C: (About 3 million injection drug users lived with HIV in 2010 worldwide while 7.4 million suffered from hepatitis C. Also, 2.3 million battled hepatitis B, according to UNODC).

Increased mental illness symptoms: (Mood disorders may be present in those addicted to cocaine between 10 and 40 percent of the time, as published in the journal Addiction Science and Clinical Practice.) Long-term health problems: These include cardiovascular, respiratory, gastrointestinal, and neurovascular complications, resulting in possible heart disease, heart attack, hypertension, organ failure, respiratory distress, and stroke. Cognitive defects: Memory, reaction time, and attention may be permanently impaired, and brain grey matter may shrink, prematurely aging someone addicted to cocaine, studies published in Molecular Psychiatry.

Is it worth it?

Cocaine Doesn’t Have To Be Your End. Cocaine is a deadly substance – highly addictive and potent. But it’s not impossible to escape its grasp. Some of the negative health effects caused by cocaine may be reversed once use is stopped. With the right medical help, the right support systems, and the proper life practices, quitting cocaine is doable. If you know anyone going through this, don’t abandon them. They need our help and support and it's not too late to fight back! Let’s unite to this epidemic.