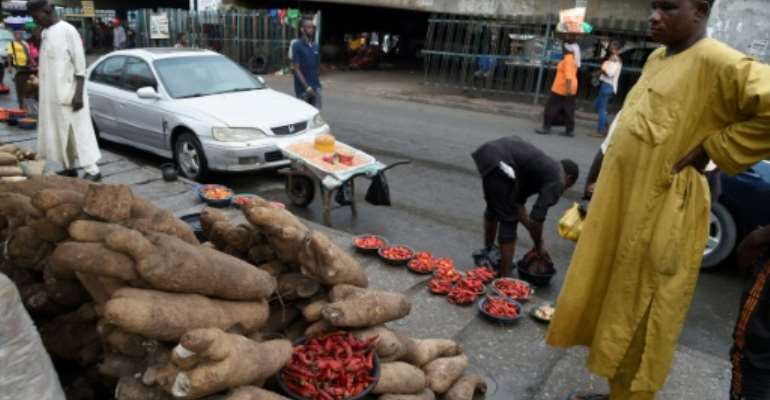 Stallholders complain that just as their costs are rising so customer numbers are falling. By PIUS UTOMI EKPEI (AFP/File)

At a market on the outskirts of Nigeria's megacity Lagos, yam trader Olatunji Okesanya is scrambling for produce as measures to halt the coronavirus cut him off from suppliers.

"The restriction in movement has disrupted supply -- the farmers are finding it difficult to get their produce to Lagos," he told AFP.

"The few who are able are bribing the security agents and this is making the price to rise."

Authorities in Africa's most populous nation are battling to stop the spread of a virus that has led to 288 confimed infections and seven deaths.

Lagos, an economic hub of 20 million, is deep into the second week of a lockdown that has left it a shadow of its usually frenetic self.

The capital Abuja is also shut down and other states around the country have imposed their own restrictions.

Officials insist that the measures are needed to contain a disease that threatens to wreak havoc on the weak health system.

But farmers, sellers, and consumers complain the fight against the virus has turned Nigeria into a patchwork of roadblocks and regulations that have ruptured business links.

'Losses are piling up'

Travel restrictions have prevented him from feeding his stock properly and blocked customers from picking up their orders.

"Profits are being wiped off and losses are piling up," he lamented.

"Feed prices and transportation costs have gone up."

Lagos is deep into the second week of a lockdown that has left it a shadow of its usually frenetic self. By Pierre FAVENNEC (AFP/File)

In a sign of how desperate the situation is getting many of the fish have started eating each other.

The authorities have frozen loan repayments for farmers and small businesses in a bid to ease the pain but many are demanding more action.

Analysts warn there could still be much tougher times ahead as the lockdowns push up costs and upset supply chains.

"As the pandemic looks set to be around for at least the next few months, we believe that consumers should prepare for even more price increases," said Nigeria's SBM Intelligence in a note.

"This development would have important implications for the health of the economy and largely determine whether the country's present anaemic growth track turns into a full downturn."

In theory food supplies should be exempt from most of the restrictions in place against the coronavirus and free to be transported.

But in a country eaten away by corruption, officers at checkpoints have often manipulated the situation to rake in money from bribes.

Other vital supplies like fertilisers fall into a grey zone and there could be a serious knock-on impact if these do not get through for the upcoming planting season.

Authorities in Africa's most populous nation are battling to stop the spread of a virus that has led to 288 confimed infections and seven deaths. By AMINU ABUBAKAR (AFP/File)

"Our members have been arrested in some states while trying to deliver their products to farmers," Kabiru Fara of the Nigerian Agro-Inputs Dealers Association told AFP.

Importers are also facing major hurdles that have seen the volumes of goods coming into Lagos through its clogged port dwindle.

"The banks are in fact closed and though theoretically it is possible to pay customs duties online, not all importers are able to do so," said one employee at a major importer.

"As a result volume of deliveries of cargo are probably down 50 percent."

'We are getting hungry'

Securing their supplies is just one of the headaches for vendors.

In the ramshackle Obalende market on Lagos Island stallholders said that just as their costs were rising so customer numbers were falling.

The lockdown means that millions of poor in the city are struggling to make ends meet and do not have spare cash to spend.

"The price of transport has increased, so everything increases," said Basseg Kate, sitting in front of her stores of rice, tomato paste and eggs.

Officials insist that strict measures are needed to contain a disease that threatens to wreak havoc on the weak health system. By Kola Sulaimon (AFP/File)

"But we are making small prices for customers because they don't have money."

The authorities have restricted markets to working every other day, meaning produce can spoil.

"Everything is rotting," said Ma Victor, waving flies away from her wares.

"Yesterday I wasn't allowed to sell, now all my tomatoes are spoilt."

Ernest Crusoe, a civil servant, was out looking for food -- but he barely had any money left to buy it.

"We eat once a day now, the rest of the time we go and rest," he said, showing the few small banknotes he had to spend.

"This thing is affecting us. We are getting hungry."