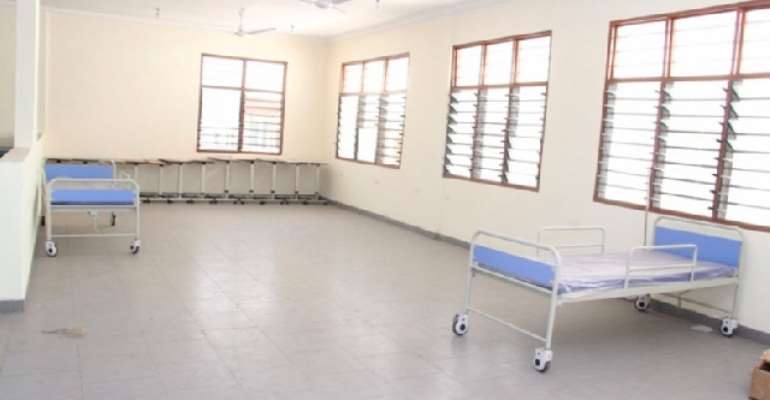 Businessman Alhaji Seidu Agongo has said he finds great joy and fulfilment in giving to the poor, especially widows, orphans, single mothers, sick people and anybody who falls within the underprivileged category in society.

It is one thing, he said, that “makes me feel human”.

His love for the poor has seen him embark on numerous philanthropic activities which have touched many lives in Ghana.

Apart from building a 30-bed Out-Patient Department (OPD) block at a cost of GHS857,000 for the Child Emergency Unit of the Korle Bu Teaching Hospital in Accra, he has also empowered a lot of poor people across the country with startup capital and equipment such as hairdryers and sewing machines.

He also pays the school fees of several orphans across the country, from the basic to tertiary level, and financially assists a lot of widows and single mothers on a regular basis among a tall raft of other kind gestures to the underprivileged in society.

Recently, Mr Agongo has been sending money directly to widows and single mothers through their mobile money wallets to help assuage their financial burden during the two-week partial lockdown of Accra, Kumasi, Tema and Kasoa due to the outbreak of coronavirus in the country.

The disease has, so far, killed six of the three hundred thirteen confirmed cases with three full recoveries.

The government is restricting movement in the four areas to mitigate the spread of the virus but that has meant that vulnerable people like widows and single mothers who live a hand-to-mouth life, would struggle to survive, thus, Mr Agongo’s decision to send them money for sustenance.

Mr Agongo recently explained his reason for embarking on such philanthropy.

“What matters in life is the impact you make in peoples’ lives; different people are making impact in different ways but everybody and his choice; my choice is the widows, the single mothers, the underprivileged children and also to create employment”, he said, adding: “To be very honest with you, I just don’t get up and do anything. And with everything I do, I want it to make an impact on people’s lives”.

He continued: “We have a lockdown, and all those kids we see selling in traffic, all those mothers we see selling on tabletops, they are doing that to earn a living … They earn a living on a daily basis, hand-to-mouth, to feed their family; so, if the mother is sick today, you’d realise that the whole family can even go hungry; everybody will struggle because the hand that feeds the family is not well, so, on that basis I decided that; ‘Let me see how best I can identify the single mothers, widows, the needy, through your platform, the Class Media Group, and send them MoMo.

Such philanthropic activities, he said, give him a lot of gratification.

“Islam teaches about giving but I go beyond Islam”, Alhaji Agongo said, explaining: “What I believe is that life has realities and be it the Bible or the Quran, the holy books tell us that you’ll be judged according to your own deeds, so, I believe that whatever blessings God has blessed me with, God knows why He has blessed me with that and, of course, God will also know the fact that the blessing he gave me, I didn’t utilise the blessing alone; I also tried to bless others. So, basically, that is what makes me feel human”.

Asked why he loves helping the widows, single mothers and children the most, the businessman replied: “I don’t know whether you’ve ever examined a war in any country, Liberia or wherever; it is the women and children that suffer. The men don’t suffer”.

“Men, sometimes, don’t even care about the kids and wife but, of course, a woman will carry a baby for nine months, she’s even at work and she’s thinking about the kid, and that is how God created women, so, I’ve always realised that ones you help a woman, you’re helping a lot of people because like it or not, if you give a woman money, she’ll prepare food for the husband and kids and everybody will eat.

“A woman will see how best she can manage the home with whatever you give her to make sure that the house functions, so, personally, I’ve been so much into widows, single parents and kids. Kids because, as a nation, if we want to kill poverty, once you invest in old people you’re not killing poverty but once you invest in kids: into their education, the same kids will become doctors, lawyers, businessmen and there is a multiplier effect because once the kid becomes a businessman like me, he’ll assist people, assist the family and the family will cut poverty at a particular level. So, that is what I believe. So, giving money to widows, single parents is to help them to invest in their kids so as to break the poverty cycle”, Mr Agongo said, as he philosophised, “You came into this world alone and you’ll leave alone. You came into this world empty and you’ll leave this world empty”.