By Shaun Tandon with Dave Clark in Brussels and AFP bureaus 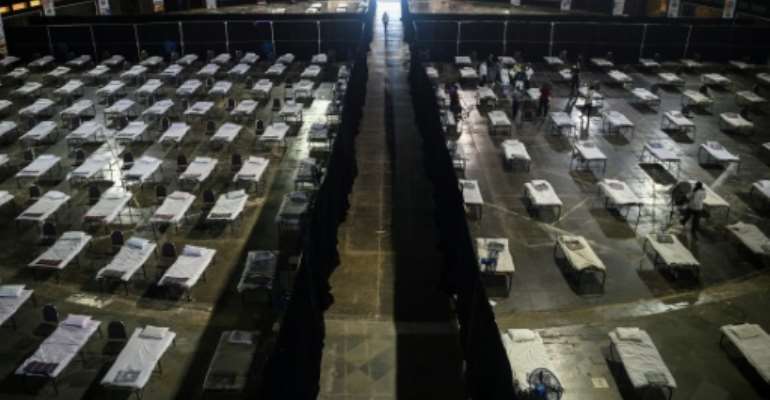 The world's coronavirus death toll has now soared past 90,000. By Punit PARANJPE (AFP)

Tentative signs of hope emerged Thursday that the coronavirus pandemic was peaking, as the European Union negotiated a rescue package to help the hard-hit continent.

With the death toll passing 93,000, there remained plenty of grim news, with the IMF warning that the world was dipping into a new Great Depression and new data showing the United States has shed a massive 17 million jobs in a matter of weeks.

But hospitalizations dropped in several countries and British Prime Minister Boris Johnson, the highest profile of the 1.5 million people infected by the virus, exited three days of intensive care.

Medical personnel move a deceased patient to a refrigerated truck serving as a makeshift morgues at Brooklyn Hospital Center. By Angela Weiss (AFP)

"The fire started by the pandemic is starting to come under control," said Prime Minister Pedro Sanchez of Spain, where fatalities inched down to 683 from 757 a day before, pushing the total above 15,000.

"Our priority now is not to turn back, especially not to return to our starting point, not to lower our guard," Sanchez told parliament.

France reported that 82 fewer people were in intensive care for COVID-19 -- the first fall since the pandemic broke out.

And in New York, the epicenter of the virus in the United States, only 200 more people entered hospitals, the lowest number since the pandemic struck, even though 799 people died over the last day, Governor Andrew Cuomo said.

"We are flattening the curve by what we are doing," Cuomo said Thursday, adding, "We have to keep the curve flat."

But he declined to predict how New York would be faring in the next few weeks, telling reporters bluntly: "I have no idea."

'A Europe that protects'

"Europe has decided and is ready to meet the gravity of the crisis," French Finance Minister Bruno Le Maire tweeted after the talks.

He warned earlier in the day that France's economy is expected to shrink six percent this year, even with the country's own 100-billion-euro relief plan.

Sister Angel Bipendu, right, a nun and a doctor who distributes medical care alongside spiritual succour in Italy. By Miguel MEDINA (AFP)

EU finance ministers put aside proposals by France and Italy for pooled borrowing. The Netherlands relented and let the deal come through after pushing hard for Italy and other affected countries to undertake economic reforms.

"Today we answered our citizens' call for a Europe that protects," Eurogroup chief Mario Centeno said after the talks.

Both workers and companies are suffering as half the planet is being told to stay at home.

Karate training in the Palestinian territories -- with masks. By HAZEM BADER (AFP)

The International Monetary Fund said that 170 of its 180 members would see declines in per capita income this year -- just a few months after predictions that nearly all would enjoy growth.

And even in the best-case scenario, the IMF expects only a "partial recovery" in 2021, assuming the virus that has infected more than 1.5 million people subsides this year.

"It could get worse," Georgieva warned.

The US Federal Reserve threw out its own fresh lifeline to Americans, with chairman Jerome Powell announcing financing facilities of $2.3 trillion "to provide as much relief and stability as we can during this period of constrained economic activity."

But Powell also warned that the US economy is moving "with alarming speed" towards "very high unemployment."

People wait in their cars as they line up outside John F. Kennedy Library to collect unemployment forms in Hialeah, Florida. By CHANDAN KHANNA (AFP)

Anthony Fauci, the US government's top pandemic expert, voiced guarded hope for a return to normal by summer thanks to the effects of social distancing, the recommendations for virtually all 300 million Americans to keep their space from one another.

"It is very likely that we will progress towards the steps towards normalization as we get to the end of this 30 days," Fauci told CBS television.

"Hopefully, by the time we get to the summer we will have taken many steps in that direction," he said.

The 55-year-old Conservative leader had received "standard oxygen treatment" after he was transferred to the intensive care unit at London's St Thomas' hospital on Monday, his spokesman said earlier.

Johnson had been an initial skeptic of rigorously emptying out public spaces to fight the virus before heeding expert advice.

His government, with Foreign Minister Dominic Raab temporarily in charge, is now debating whether to extend the lockdown implemented on March 23.

Britain announced another 881 deaths on Thursday, taking the total to 7,978.

Despite hopeful signs in Western nations, the pandemic is marching into areas previously only lightly affected. Africa faces vast consequences, with the World Bank warning that sub-Saharan Africa could slip into its first recession in a quarter.

In a move to build international solidarity over the crisis, Germany on Thursday led a videoconference session of the UN Security Council on the pandemic.

Secretary-General Antonio Guterres opened the session by calling the pandemic "the fight of a generation -- and the raison d'etre of the United Nations itself."