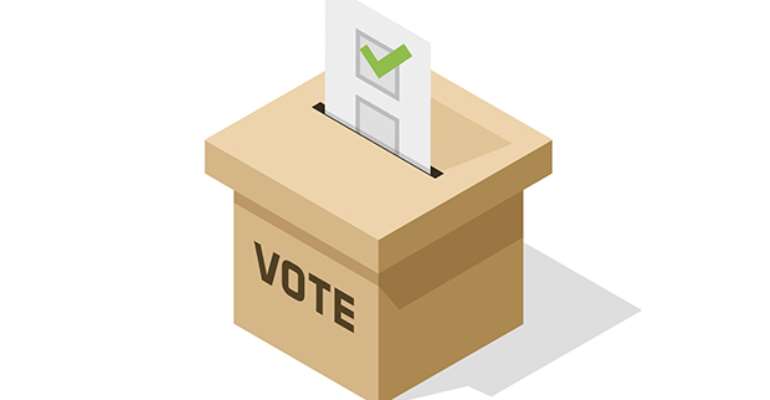 1.0 Background to the research
Since 1992 when Ghana returned to multiparty democracy, parliamentary elections have very important in our political discourse. This is because the number of seats a political party wins in an election to a large extent determines the political future of the party. In view of this, political parties attach seriousness in the selection of candidates. Most often than not, candidates selected are those who in the view of the party appeal not only to the rank and file of the party but also to the constituents as a whole. But beyond popularity, other factors also come into play. In recent times, what has been the determining factor in who becomes a parliamentary candidate of a party is money and in some cases one’s connection with party executives. Ironically, these last two factors have always been the bane of the political parties. This because being rich or having a strong links with party executive does not necessarily make one popular among voters in general elections.

In view of this, political parties, media houses, aspiring parliamentary candidates and even sometimes, individuals conduct opinion polls to assess the strength of competing candidates since the choice of a bad candidates does not only affect the fortunes of the party in a parliamentary but also in a presidential election.

It is against this backdrop that the current opinion poll is being conducted to assess the popularity of the two competing candidates among the delegates of NPP in the upcoming parliamentary elections slated for 25th April 5, 2020.

2.0 Profile of the candidates
The Dormaa Central Constituency parliamentary slot is being contested for by two candidates who incidentally are all coming from the health ministry- the minister for health and the board chairman of Ghana Health service.

2.1 Hon. Kwaku Agyeman- Manu
He is synonymous with the Dormaa Central Constituency. He has been politically active since the late 90’s. He is seen as a grass root politician. He has been an Assembly man; party chairman; deputy minister at the Ministries of Finance, transport, Trade and Industry; a three-time MP and currently the minister for health. He boasts of over two decades’ experience in politics. Professionally, he is a chartered accountant.

2.2 Dr. Yao Yeboah
He is an accomplished academician. He holds a PhD in Public health and has many publications to his credit. In terms of Dormaa politics, he is not a stranger. This is the third time he is vying for the seat. He contested for the seat in 2008 and 2015. Though he lost to the incumbent MP in these two primaries, he continues to help the party in diverse ways. He is a man of strong religious belief. Professionally, he is a health administrator and has worked in many health establishments. He was one-time administrator of Dormaa and Agogo Presbyterian hospitals, Director of Pentecost Social Services. He has also lectured in the Pentecost University College. He is currently, the Board Chairman of Ghana health service.

3.0 Objectives
To find out which of the two candidates is more popular amongst NPP delegates in Dormaa Central Constituency.

4.0 Research Tool
This investigation is quantitative and qualitative in nature and as such, the researchers used questionnaire and interviews to gather data for the analysis.

4.1 Sample Size and Technique
The Dormaa Central Constituency has a total of six hundred and thirty-eight delegates (638) comprising, five hundred and eighty (580) polling station executive, eighteen (18) constituency executive, thirty (30) electoral area coordinators, five (5) council of elders and five (5) patrons. In all 380 respondents were selected through random sampling technique. 130 were interviewed whilst anther 250 respondents were given questionnaire. Those who answered the questionnaire were those with at least basic level of education or were unwilling to grant oral interview. Those given the questionnaire were given three weeks to complete and submit to the researchers. In all, 207 respondents returned their forms with seven being blank. All the questionnaires were returned in sealed envelopes. The questions were two- both close and open ended. The respondents were supposed to indicate their choice of a parliamentary candidate by ticking agaist the name of one of the two candidates and provide not more than two reasons for their choice.

4.1.3 Summary of Results
Both the questionnaire and the interview data show that most of the delegates prefer Dr Yao Yeboah to Hon. Kwaku Agyeman- Manu. Out of the 337 respondents who were either given questionnaire or were interviewed, 142(42.13%) respondents indicated their preference for hon. Kwaku Agyeman -Manu while 185 (54.90%) said they would vote for Dr Yao Yeboah. Ten (10) people representing 2.97% did not show their preference.

5.0 Conclusions
The major concern of the research was to find out which candidates is a better appeal to the delegates in the Dormaa Central Constituency and by extension, more popular with the general voting public. Consequently, the respondents were asked to indicate their preference between the two contending candidates- Hon. Kwaku Agyeman- Manu and Dr Yaw Yeboah. The results of both the quantitative and qualitative data show that Dr. Yao Yeboah is more popular amongst the delegates (see sec.4.13 above). Chiefly amongst the reasons given for the choice of Dr. Yao Yeboah instead of Hon. Kwaku Agyeman- Manu is his longevity in the politics in Dormaa. The delegates fear he might be rejected by the voting populace when he is presented especially at this time when the NDC candidate is a grass root politician. Some made reference to 2008, 2012 and 2016 election results. In 2008 and 2012 elections, he garnered more votes than the president. This was not so with the 2016 elections in which the presidential candidate had more votes. They argued that presenting Hon. Agyeman -Manu will endanger the chances of the party as the people will vote what has become known in our local parlance as ‘skirt and blouse’. For Dr. Yao Yeboah, the delgates think he has committed no political sin to warrant the delegates voting against him.

Besides the argument that the people are fed up with him, most of the delegates accused Hon. Kwaku Agyeman -Manu of cronyism. They said that all those he has helped to secure jobs in the civil and public sectors are people in his inner circle. They also accuse his followers of corruption. They cited instances when they charge people various sums of money in order to get them jobs.

Again, the respondents think Hon. Kwaku Agyeman- Manu’s lack of recognition for the local party executive will spell political doom for the party if he is elected. The delegates therefore prefer a neutral candidate, and this they find in Dr. Yao Yeboah.

However, some delegates think that Hon. Kwaku Agyeman -Manu is resourceful, has projected Dormaa well in a national discourse, is eloquent, has few projects to point and therefore, marketing him will not be difficult.

6.0 The Way forward
There seem to be a serious political tension within Dormaa Central NPP and therefore the winner of the primaries should do to reach out to the loser in order to bring about unity within the rank and file of the party.