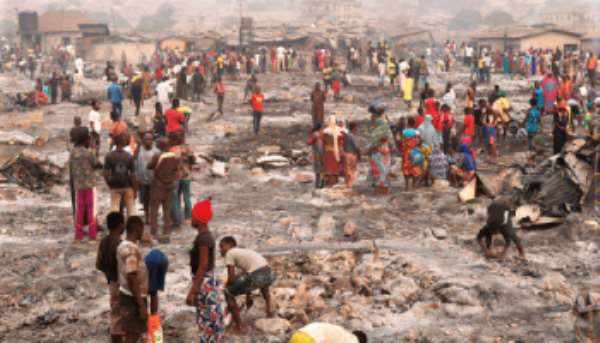 Fire, allegedly started by a jealous girlfriend at the Zabrama Wood Market at Agbogbloshie, Accra, has left more than 400 people in the area homeless.

The angry girlfriend, who is yet to be arrested, is said to have set fire to the house of her boyfriend whom she accused of abandoning her and two other women (after impregnating them) and harbouring another woman in his house.

Last Tuesday (April 7, 2020), the angry woman allegedly mobilised the two other women and approached the man, resulting in a confrontation during which one of the women set the room on fire.

Properties worth thousands of Ghana cedis were destroyed during the fire, which started at about 1:50 a.m. and lasted for about three hours before the Ghana National Fire Service (GNFS) could douse it.

Structure destroyed
When the Daily Graphic visited the area later in the day, some policemen were spotted patrolling the area but the fire service personnel had already left the scene.

It was observed that the entire wood market and adjoining wooden structures, serving as residence for over 400 people, were completely razed to the ground.

Other structures, including a mosque, were also affected.

Clashes
The Head of the Operations Unit of the Accra Regional Police Command, Assistant Commissioner of Police (ACP) Mr Kwesi Ofori, said the police received information at about 1:55 a.m. about a fire outbreak at the Zabrama Wood Market at Agbogbloshie.

He said when the fire engines of the GNFS arrived at the scene, the haphazard arrangement of structures in the area made it difficult for the trucks to access the scene, compelling the firefighters to aim at the fire from a far distance.

ACP Ofori confirmed that the police had also picked up information that the fire was started by a jealous woman but the information was yet to be authenticated.

Later, some youth who belong to one of the ethnic groups in the area and who lost their property to the inferno, allegedly went on the rampage, attacking residents from the said ethnic group after learning that it was caused by a woman from another ethnic group.

The intervention of the police led to the evacuation of some youth to avert a breach of the peace in the area.

ACP Ofori said about five police patrol teams were deployed to the scene to bring the situation under control and also help in the evacuation of some vulnerable persons, including the aged, women and children, to safety, while the fire service doused the fire.

The Regional Police Operations Unit head said he was “happy that no lives were lost even though the fire started at dawn when many people in the affected area were sleeping.”

He said the police would continue to be on the ground to ensure that criminals did not take advantage of the situation.