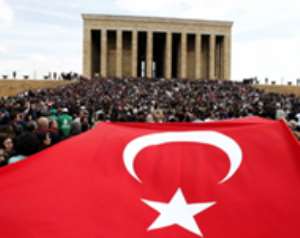 Turkey's military has called on the public to keep up protests in defence of secularism after a judge was shot dead in a court that regularly resists Islamist pressure.

The military, which has intervened in domestic politics in the past, made its call after protests on Thursday against the killing turned into a demonstration against the government, which has its roots in political Islam.

"But it must not remain as a reaction of just one day, a one-off event ... It must gain permanence, as something continuous, it must be pursued by everyone," he said.

The call is seen as a warning to the government from the army, which helped topple an Islamist-leaning government in 1997, and follows comments in leading papers that the government should learn lessons from the mass pro-secular protests.

Tayyip Erdogan, the Turkish prime minister, held a meeting of ministers and security chiefs on Friday to discuss the shooting, an official at his office said.

Erdogan was quoted by the Star newspaper as saying that there was a conspiracy surrounding the attack, and that the leader of the opposition, Deniz Baykal, was part of it.

The shooting, by an Islamist lawyer, was seen as an attack on secularism as it was against Turkey's top administrative court which upheld rules restricting the wearing of headscarves. The gunman killed a judge and wounded four others.

Newspapers said he admitted to shooting the judges because of their rulings.

Headscarves have become a symbol of a broader struggle over the role of religion in Turkey, which is mainly Muslim but officially secular and applying for EU membership.

Crowds pushed and booed ministers of the ruling Justice and Development Party (AKP) on Thursday at the judge's funeral. They also called for the government's resignation.

The AKP has had strong support since a landslide victory in 2002, although Thursday's demonstrations of tens of thousands of Turks were the culmination of months of tension between the government and secular establishment.

Secularists accuse the AKP of having an Islamist agenda and cite recent attempts to restrict alcohol consumption and ease restrictions on religious education. The AKP denies the accusations.

However, Erdogan and his ministers have repeatedly criticised the court for its headscarf rulings and wants the rules eased.

Virus pushes US hospitals to the brink, India hits record ne...
6 hours ago