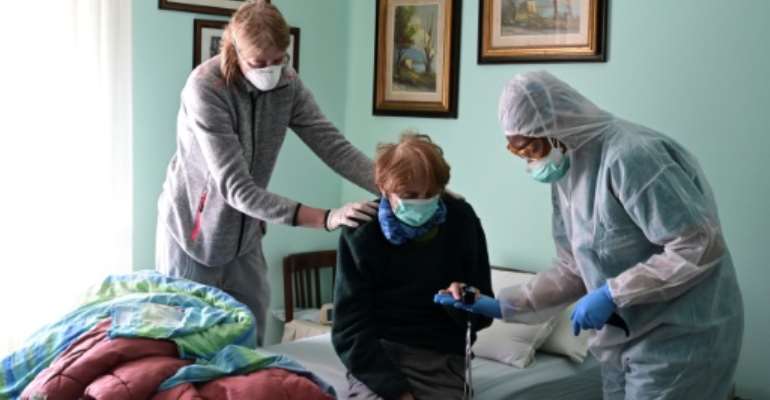 Sister Angel Bipendu (R) makes home visits within Zogno, a commune of 9,000 in the province of Bergamo, where the coronavirus has killed about 2,000 people. By Miguel MEDINA (AFP)

She's a woman of faith and science. Sister Angel Bipendu, a nun and doctor, is battling on two fronts against Italy's coronavirus pandemic, both treating and comforting patients.

Sister Angel -- whose native country of Democratic Republic of Congo suffered its own epidemic two years ago with the Ebola virus -- tries to remain optimistic in light of Italy's crisis, which has killed nearly 18,000 people, most in the northern region of Lombardy.

"I think of my Congo, where sick people will also die of hunger," said Sister Angel, who for the past few weeks has substituted her nun's veil for a protective suit, gloves and a surgical mask.

The 47-year-old makes home visits within Zogno, a commune of 9,000 inhabitants in the province of Bergamo, where the coronavirus has killed about 2,000 people.

"I'm afraid of not being able to do everything I have to do," she told AFP. "Fear of being infected? Absolutely not."

Roughly 100 doctors and nurses have died caring for coronavirus patients since the start of the pandemic, and she says they "didn't back down an inch".

Sister Angel, who arrived in Italy 16 years ago, decided late in life to embark on medical studies and graduated from Palermo's medical facility in Sicily.

Last month, she took a leave from her convent of Canossian nuns and joined a unit designed to care for patients suspected of having the coronavirus inside their own homes.

The patients -- many of them older retirees -- first greet their doctor with surprise, recognising she is "not their usual doctor".

"Then I introduce myself and explain to them that I'm not just a doctor, that I'm also a nun and then everything changes -- the doors open," she said.

Sister Angel takes temperatures, checks blood oxygen levels and monitors chronic illnesses such as diabetes or hypertension. When a patient is critical they are hospitalised.

"We're on the right path," she told one woman during a home visit on Tuesday after the patient's slightly elevated temperature had gone back to normal.

The coronavirus has forced into quarantine many general practitioners who ordinarily would have done the work Sister Angel now performs, and many older patients live alone.

"The support is also psychological, it's necessary to boost morale, to break the solitude."

Sister Angel still finds time to go to church -- sporting a facemask but swapping protective gear for her nun's attire.

Between 2016 and 2017, Sister Angel was involved in another human drama, helping migrants in the Mediterranean on a rescue ship of the Order of Malta's Italian Emergency Corps (Cisom).

On board, she helped deliver babies, treated hypothermia and chemical burns, she said.

The vicar of the neighbouring parish of Alme, Giorgio Carobbio, told AFP it was an advantage to have a combination doctor and nun within the community.

Sister Angel helps not only older people but also the young.

"She's a nun who is full of energy," Carobbio said.