By Abdellah Cheballah with Tunis and Rabat bureaus 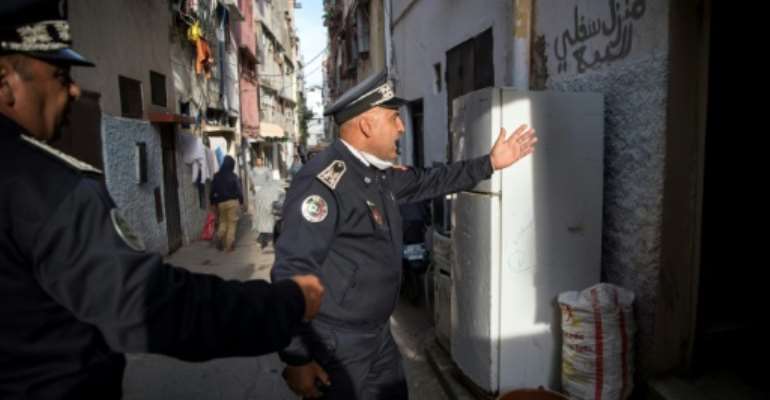 Moroccan security forces instruct people to return home as part of measures to combat the novel coronavirus, in district of Takadoum in the capital Rabat on March 27. By FADEL SENNA (AFP/File)

From an acute shortage of regional staple couscous to a surge of confidence tricks and counterfeiting, authorities in North Africa have been busy tackling coronavirus challenges that go beyond healthcare.

For the past two weeks, Algeria's more than 40 million people have been facing a severe shortage of couscous semolina after rumours spread on social media sparked panic buying.

"I have never in my life bought a 25-kilo bag of semolina but I was afraid the situation would get worse and bakeries would close", said Fawzi, a young entrepreneur in the capital Algiers.

President Abdelmadjid Tebboune tried to allay fears, declaring that semolina stocks were enough "for four or five months", but it has had little visible effect.

Karim Khelouiati, a cyber-security expert, told AFP that individuals stockpiling was "a human reaction". But, he added, "some people try to take advantage of it" too.

From March 22 to April 1, more than 2,500 people were arrested for speculatively hoarding basic foodstuffs and over-the-counter drugs, police said, with more than 5,000 tonnes of food supplies and some 219,000 pharmaceutical items seized.

Tebboune has urged "patriotic" Algerians to publicly denounce hoarders, while police have stepped up checks and encouraged people to report "all acts of speculation, monopoly and fraud".

A policeman checks a vehicle in Tunis on March 24 as part of steps to contain the coronavirus. By FETHI BELAID (AFP/File)

After flour and semolina ran out in some areas of the country, Tunisian President Kais Saied called for speculators, whom he described as "war criminals", to be punished.

On Tuesday, authorities arrested a state official in Kef, near the border with Algeria, after Tunisia's national anti-graft body INLUCC accused elected representatives and civil servants of directing flour and semolina supplies toward certain businesses.

And at the end of March, customs officers seized expired personal protection equipment including gloves and masks worth 500,000 dinars (more than $170,000) in the port of Rades, near the capital Tunis.

Speculation began in Morocco even before it announced its first case of COVID-19 in early March, with a rush on masks and the price of disinfectant soaring, leading the government to lay down fixed prices.

In the historic city of Fez, police apprehended four people suspected of operating a "clandestine workshop" from a garage that produced and sold counterfeit disinfectant.

In Sale, near the capital Rabat, two "ex-convicts" posed as public employees taking part in an awareness-raising campaign in order to commit thefts, local media reported.

The United Nations Development Programme (UNDP) in Rabat warned on March 30 of individuals fraudulently posing as members of its staff.

Authorities have their eyes on what's happening online too.

Dozens of people have been questioned in Morocco over accusations of spreading "false rumours" linked to the coronavirus pandemic on social media.

In Algeria, police colonel Abdelkader Zighed warned that the internet had become a vehicle for false information that helps "sow confusion".

Algeria is the worst-hit of the three North African countries, with 205 officially declared deaths and 1,572 cases of infection.

One online rumour about the imminent closure of service stations caused traffic jams in many Algerian cities last week. But the measure only applied to Blida -- the main virus hot spot, near the capital Algiers.

Police have formed cyber-investigation teams to track peddlers of fake news, and Zighed said this had allowed them to "neutralise many opportunists" publishing false information.

A man disinfects a building in Algiers on March 20. By RYAD KRAMDI (AFP/File)

A young woman from the western city of Oran found herself in trouble after posting a video on Facebook accusing Algerians who had returned from abroad of leaving quarantine early.

She retracted the claim but is accused of disseminating material "for propaganda purposes" to "harm the national interest", police said.

Some Algerian media outlets have warned of the risks to freedom of press and expression.

On April 1, a journalist and two managers from the Sawt Al-Akher newspaper were taken in for questioning for reporting on alleged errors in coronavirus testing.

They have been released under judicial supervision.