Sudan still in crisis a year after Bashir's ouster 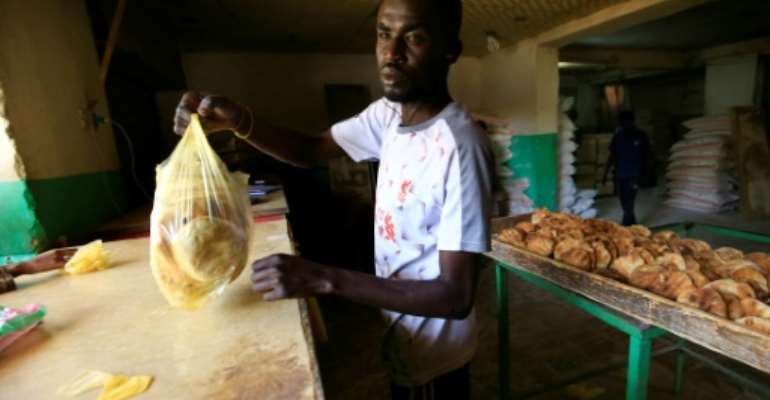 The protests that led to the ouster of Sudan's veteran leader Omar al-Bashir a year ago had erupted after a government decision to triple the price of bread. By ASHRAF SHAZLY (AFP/File)

A year after one of Africa's longest serving leaders, Omar al-Bashir, was ousted from power in the face of mass street protests, Sudan is still reeling from daunting crises including deep economic woes.

Bashir was overthrown on April 11, 2019 by the military, which was responding to mounting public anger against his three decades of iron-fisted rule.

He was arrested and detained in a Khartoum jail and in December ordered to serve two years in a correctional centre for corruption.

He still faces separate charges over the killing of protesters and the 1989 coup that brought him to power.

Authorities have also agreed that Bashir should stand trial before the International Criminal Court on charges of genocide and war crimes committed from 2003 in the Darfur conflict between the Arab-dominated government and ethnic minority African rebels.

Since August last year a transitional government -- comprised of civilians and military officials -- has taken over the reins of power in Sudan.

But the political transition to full civilian rule is fragile in a country where a creaking economy -- its dysfunction largely blamed on Bashir-era policies -- risks a collapse that could spark fresh social unrest.

Unrest broke out in February against a move to force soldiers into retirement after they voiced support for last year's popular revolution. By ASHRAF SHAZLY (AFP/File)

The protests against Bashir erupted in December 2018 after the government in effect tripled the price of bread.

"By far the main challenge facing the transitional period is the very same constellation of factors that contributed to the demise of Bashir's rule," said Magdi el-Gizouli of the Rift Valley Institute.

The main problems Sudan's new leaders now face, he said, are the "reconstitution of the political order... the deep and punishing economic crisis and the multiplying costs of maintaining social peace".

Sudan's deposed military president Omar al-Bashir sits in a defendant's cage during his corruption trial at a court in Khartoum on December 14, 2019. By - (AFP/File)

In August, Sudan formed a technocratic government on the back of a power-sharing deal between top military brass and protest leaders.

The cabinet, headed by seasoned economist Abdalla Hamdok, is tasked with steering the country during a three-year transition through myriad obstacles.

Soaring inflation, a huge public debt and tricky efforts to forge peace with rebels are among those challenges.

Sudan's economy, already suffering from long-running US sanctions, was badly hit in 2011 when oil-rich South Sudan broke away in a negotiated divorce with Bashir's government.

The US announced an end to its 20-year-old trade embargo against Sudan in October 2017, but kept the country on its state sponsors of terrorism list.

Hamdok's administration is now hoping that the lifting of US sanctions on 157 Sudanese firms in March will help attract foreign investment, but the future still looks grim.

Households still suffer frequent power cuts and some Sudanese still queue up for hours to buy staple foods like bread or to fill up their cars with petrol.

Motorists queue to fill up with petrol in Sudan where the economy is still reeling a year since the ouster of former autocratic leader Omar al-Bashir. By ASHRAF SHAZLY (AFP/File)

"Economic recovery in Sudan will be a long road and will require the thoughtful, sustained and coordinated support of traditional donors such as the EU, UK, Japan and the US as well as Gulf states," said Jonas Horner of the International Crisis Group.

"Long-term external technical and financial support is required to pull Sudan out of its economic mire."

Hamdok's government has been pushing to boost the country's international standing and ease tensions with the US, and in December the premier visited Washington.

Authorities in February said they had agreed to compensate families of the victims of the USS Cole bombing in Yemen's Aden harbour, for which Al-Qaeda claimed responsibility.

The United States said the bombers who had carried out the attack in 2000 were supported and trained in Sudan.

Khartoum had always denied the charges but agreed to the settlement to fulfil a key US condition to remove it from Washington's terrorism blacklist.

"While such measures are important steps in trying to re-establish Sudan's credibility abroad, they are controversial at home particularly with people close to the old regime," said Marina Ottaway, Middle East fellow at the Wilson Center.

Sudan's political transition from military to civilian rule is being tested on many fronts, including security. The prime minister in March survived unharmed after a bomb and gun attack targeted his convoy in Khartoum. By ASHRAF SHAZLY (AFP/File)

In January, five people including two soldiers were killed when Sudanese troops crushed a rebellion by Bashir loyalists at the long-feared security agency who were angered by a retirement plan.

And in March, Hamdok survived unharmed after an unclaimed bomb and gun attack targeted his convoy in Khartoum.

"There is no shortage of possible suspects," said Ottaway, adding however that the most threatening scenario would be "if elements of the military were found to be involved".

And while Sudan continues to face sporadic communal violence in the country's far-flung regions, including Darfur, authorities have started thorny talks with rebel groups over a possible peace deal in South Kordofan and Blue Nile states.

"We have come a long way with armed rebel groups," information minister and government spokesman Faisal Saleh has said.

"The outstanding issues are not big but they are complicated."

‘We Won’t Tolerate LGBTQ+’ —Ga Chiefs back criminalization b...
34 minutes ago