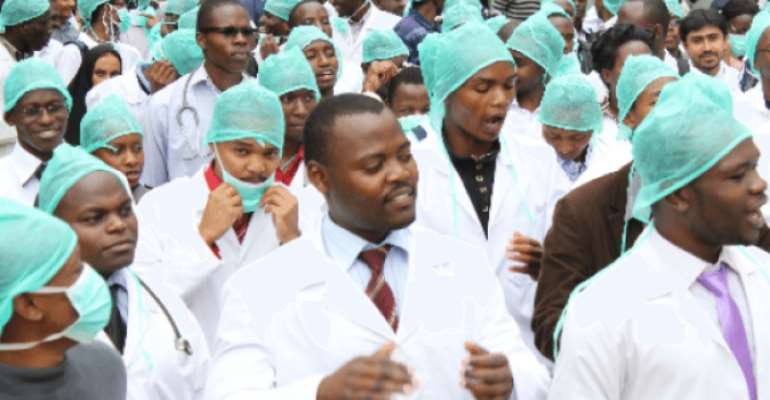 On April 5, 2020, His Excellency the President announced that there will be tax waivers for the next three (3) months (i.e April, May and June) for health workers as they help combat this virus.

He further announced in his address to the nation that frontline health staff will be given back 50% of their basic salary as allowance for 4 months (i.e March, April, May and June) of which March's allowance will be paid in April.

He continued that he has instructed the Controller and Accountant's General (CAGD) to effect that payment.

This sparked the argument of who a frontline health staff is.

The Global Health Workforce Alliance on the occasion of World Health Day 2009 defined frontliners to be all health workers thanking them for the role they play during disasters and emergencies.

But the definition of frontline in Ghana have been defined by several groups and cadre of staff in the health sector to include themselves only.

The Ghana Medical Association (GMA) in their meeting with the President at the Jubilee House defined frontline workers to mean all doctors.

Ghana Registered Nurses and Midwives Association (GRNMA) also defined frontline workers to mean all nurses and midwives as said by their President after meeting with His Excellency.

This clearly shows that each cadre of health group have their own definition of who a frontline health worker is.

But we are of the view that authorities must take due care in defining who a frontline health worker is and how they implement the directive by the President of the Republic.

In a healthcare setting, the chain of health treatment starts from the security point where a patient enters the four walls of the facility. The patient will then move to the Medical records for his/her records to be taken and issued with a folder (if manually) or entered electronically if the facility is going paperless.

It is after that, the patient can see the nurse at the Out Patient Department (OPD) for vital signs to be taken and heads to the consulting room to be seen and diagnosed.

After diagnosis and drugs prescribed by the prescriber or physician, he or she will proceed to the Pharmacy for drugs to be dispensed to him or her.

In case the patient needs to be admitted, he or she will proceed to the ward for admission.

This clearly shows that anyone in the health settings stands a risk of contracting this virus. It is not only a group of staff that are at risk or will be at risk.

These summaries the fact that all health workers are frontliners and not a group of staff.

This is why we ask that authorities relook at their definition of who a frontline health worker is to avoid agitations among all cadre of health staff.

If for example, frontline workers are only nurses and doctors, then all cadre of health staff other than nurses and doctors are to stay home to avoid contracting the virus. That will mean a clear break in the treatment chain.

Before a nurse or doctor can work, a medical record staff is involved; support staff including Hospital Administrators, Accountants and Accounting staff, Supply Officers, Procurement Officers among others are involved; Pharmacist and Pharmacy staff are also involved. It goes on and on.

We envisage that if this isn't carefully looked through, can lead to apathy, low morals and subsequently low performance during this pandemic despite we needing all hands to be on deck to help fight this virus.

We call on the President and his cabinet, the Minister and the Ministry of Health and the Ministries concerned in this directive to come out clear and redefine who a frontline health worker is to ensure that all health staff put out their maximum best to ensure we all combat this virus in the shortest time to avoid excessive loss in the economy.