By Gibby Zobel in Itatiaia, Brazil 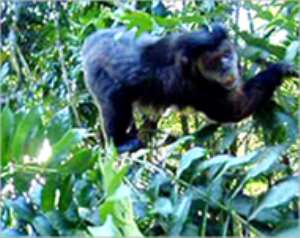 Up to a quarter of the world's monkeys will not survive another two decades, according to a new report on endangered primates.

It's a shock warning about a species that until today has never faced a single threat of extinction.

"Relentlessly hunted for their meat and fur, bodies broken for dubious medicines, shot for stealing crops, no primate is entirely free from danger.

"No primate has gone extinct in all the 20th century but bare survival should not deceive us, their luck is almost spent. As many as one quarter of today's primates will be dead in 20 years," says John Aguair of Conservation International and one of the authors of the report, Primates in Peril.

Brazil has the largest number of primates found on the planet - 103 of a total 625 - and three on the list of the 25 most endangered primates referenced in the report are found just in the Atlantic forest bio-region.

"It is in South America above any other region where the greatest number of critically endangered primates is found. Owing in large part to the near-total annihilation of the Atlantic Forest," he says.

The northern and southern muriqui, Brachyteles arachnoids, are the largest primates in the Americas.

According to the Centre for the Protection of Brazilian primates, 24 different primates are threatened with extinction.

Australian Christian Spencer who has lived in the National Park of Itatiaia for four years is one of a rare handful of people to see the gentle giant in the flesh.

Spencer told Aljazeera.net: "We heard a noise and 10 metres in front was a monkey, big, yellow, with a baby on his back and we stopped and watched. There were 30 or 40 of them. They use their tail to swing like Tarzan. They make a noise like the neighing of a horse. We saw them go down to the other side of the mountain; animals - very big, very beautiful.

"Because we saw so many, with babies, it was something very significant and a good signal. They were all looking at us. Within five minutes they were gone. I felt that we saw something very special, very rare."

Commonly known as the woolly spider monkey, this muriqui is described by indigenous Indians as ''the gentle man of the forest''.

Considered the most peaceful of the primates, it has a habit of hugging frequently, mainly when meeting members of other known groups as a form of reassurance and mutual solidarity. It never leaves the trees for the ground.

Attempts to reproduce in captivity have only yielded one successful birth and the primate is able to reproduce one offspring every three years. The muriqui tops the list of animals most threatened with extinction in the state of Rio de Janeiro.

Trying to spot one is an exacting task. Beginning at first light, at an altitude of 1000 metres, Spencer takes me up the Three Peaks track where he made the sighting in 2002.

Quickly immersed in the deep green rainforest, the track weaves through palm trees, exotic plants called bromeliads and bamboo to the sound of birdsong through the cloud mist.

There are faeces of an ocelot (also known as the painted leopard) and scratches on a tree of a puma. We pick up the scent, literally, of peccaries, similar to forest pigs, which mark territory with skunk-like odours.

By the look of the demolished bamboo and a track turned to mud, we surmise that the about 40 muriqui passed along this trail a few minutes earlier. I am advised to climb the nearest tree if they appear. But there are no signs of the primate today.

"I'd been up the trail 50 times before I saw them and I've been up again another 50 times and never seen them again. But this is their habitat, you need a lot of luck and patience," Spencer says.

Later on in our primate adventure, one of the 24 most threatened primates drops in on us. The macaco-prego, Cebus robustus, in a group of around 20, is a more common sight.

Regarded as one of the most intelligent primates in the world, it has learned how to use tools - a rock - to open fruit like a coconut.

A mother with a child on her back approaches first and then holds back as the alpha male (chief of the tribe) comes close enough to take a banana out of my hand.

It is sobering to think that this type of encounter with our closest cousins may one day soon be lost forever.

Brazil has had success in reversing the bleak trend of dwindling numbers. The golden-haired lion tamarin, Leontopithecus rosalia, was saved from near extinction and bred in captivity. Its numbers have begun to increase becoming a symbol of conservation efforts.

But slow and encroaching deforestation is robbing most of the primates from their natural habitat and few can survive the changes.