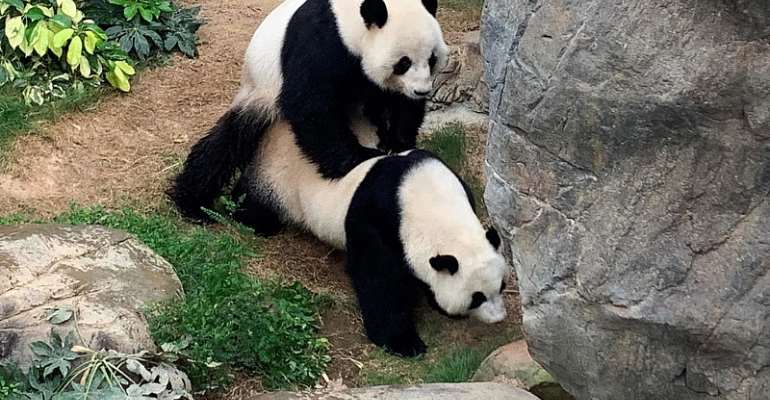 Two middle-aged giant pandas have finally managed to mate after living together for 10 years in a Hong Kong theme park. Notoriously perceived as lacking libido, the coronavirus lockdown seems to have brought the iconic Chinese bears months of conjugal harmony and privacy, without constant human intrusion.

Ying Ying and Le Le, a couple of giant pandas, successfully managed to mate for the first time in over 10 years of cohabitation at Ocean Park in Hong Kong.

The theme park closed down on 26 January due to the Covid-19 lockdown, giving the 14-year-old pandas unending days of quiet and privacy.

The pandas' sex-drive appears to have been considerably dampened while under the constant scrutiny of thousands of visitors that have frequented the theme park over the years.

According to Dr Li Binbin, a giant panda conservation specialist who lectures at Duke Kunshan University in China, “The drastic reduction of human disturbances around Ying Ying and Le Le definitely contributed to them mating successfully.”

Ocean Park proudly announced that Ying Ying and Le Le “succeeded in natural mating at around 9am this morning [Monday 6 April]” after failed attempts since 2010.

Chinese scientists have even tried several artificial insemination procedures which have all resulted in miscarriages by Ying Ying.

“The successful natural mating process is extremely exciting for all of us, as the chance of pregnancy via natural mating is higher than by artificial insemination,” said Michael Boos, Executive Director in Zoological Operations and Conservation at Ocean Park.

Dr Li who was also a science advisor on wild pandas for Disney's documenary "Born in China" added that pandas are a shy species, sensitive to their surroundings.

“They are sensitive to noise, to smell, to objects around them. If they are stressed, they cannot indulge in normal behaviour, such as mating,” she told RFI.

This is why mating becomes difficult when pandas live in captivity.

“It is essentially because of the stress brought on because they are outside their natural habitat,” Li said.

Pandas in the mood for love
Ying Ying and Le Le's behaviour have been scrupulously monitored by Ocean Park's team as they are now well into the breeding season which lasts from March until June.

They noticed that Ying Ying has been spending more time playing in the water and Le Le has been leaving scent-markings around the enclosure - behaviour typical during the mating season.

According to Li, common assumptions that pandas fail to mate are wrong. She claims they have no difficulty at that in the wild.

“Female pandas ovulate and reach a peak to receive males around two to three days during the mating season,” she explains. “And they can choose to mate with several males during that short period.”

In the wild, female pandas can choose the males they want to mate with. The males will fight amongst themselves to win her favours.

It could be that Ying Ying and Le Le did not show any interest towards each other for the past 13 years because, being in capitivity, they did not choose each other.

Any signs of Ying Ying's successful pregnancy will show “as early as late June” according to Boos.

“We hope to bear wonderful pregnancy news to Hong Kongers this year”, he said.