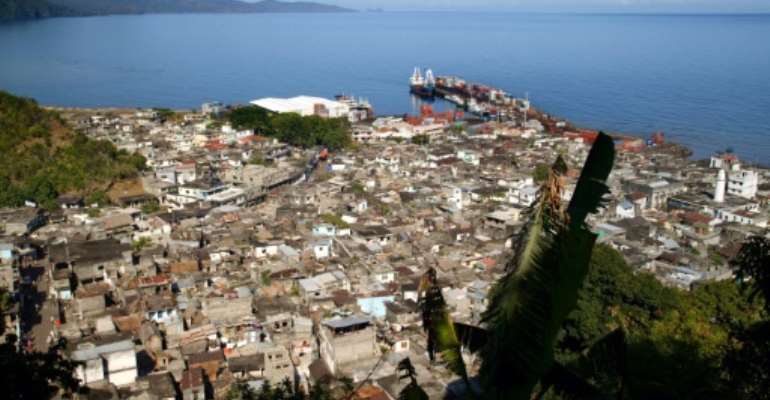 Mayotte is administratively part of France, even though it is more than 8,000 kilometres from Paris. By RICHARD BOUHET (AFP/File)

"How can we be expected to stay indoors? It's like an oven inside!"

Beneath the shade of a mango tree, Nemati Houmadi is talking to her neighbours, all of them eager to catch the cool morning breeze which wafts through Karidjavendza, a slum in the Indian Ocean island of Mayotte.

In theory, the small gathering should not be taking place. Mayotte -- a department of France -- is in lockdown, like its parent country 8,000 kilometres (5,000 miles) away.

But Karidjavendza is a microcosm of the challenges facing many governments as they try to tackle coronavirus in settings of overcrowding and poverty.

Here, people have to endure suffocating heat in tin shacks -- a problem that millions of confined slumdwellers north of the equator will soon experience as spring advances into summer.

And here, the risk of coronavirus heightens with poor sanitation, even with France's deep pockets to help this distant territory.

Mayotte is one of four islands in the Comoro archipelago northwest of Madagascar that was once ruled by France.

In 1974, it was the only one of the four to vote in favour of retaining its link with France and forsake independence -- a move that the other islands reject to this day.

Now one of France's 101 departments, Mayotte has recorded 184 cases of coronavirus, two of them fatalities.

In Karidjavendza, there is no running water or electricity, and the alleys are of beaten earth. Around a thousand people live here, most of them Comoran citizens without papers.

Today, the outside temperature is around 30-32 degrees Celsius (86-90 degrees Fahrenheit). Without cooling, the temperature in homes made of corrugated-iron -- used by 40 percent of dwellings in Mayotte -- typically reaches 40-45 C (104-113 F).

"We don't have a fan or air conditioning," said Houmadi, a woman aged in her fifties and the mother of four children aged 12 to 20. "Outside, at least you can breathe!"

Another big worry is water.

A third of the citizens of Mayotte do not have access to running water. In Karidjavendza, part of the district of Kahani in the centre of the island, locals fill up their jerricans from a watering point installed a decade ago, accessed using a smart card.

"The watering point only runs for a few hours a day. There's not enough water for all of us to fill our canisters -- we have to go and hassle people in Komprani to get water from their outlet," said Houmadi, referring to a neighbouring slum.

"It's hard for us to top up our smart cards just now," said neighbour Ibrahim Ousseni Abdallah. "The only place is Kaweni (25 kilometres, 15 miles) away, and with the lockdown, it's hard to travel there."

The French charity Medecins du Monde (Doctors of the World) says the water taps "are neither desirable from a health point of view, as they create clustering, nor sufficient from a humanitarian perspective."

"If you don't have any water, you can't wash your hands."

Hand sanitiser is in short supply in Mayotte, and its high price makes it a low-priority for the island's population, 82 percent of whom live below the official threshold of poverty.

A further problem in Karidjavendza -- and one familiar to slum dwellers around the world -- is the relentless pressure on resources from population growth and the area's informal status.

"The people are squatting on this ground," said the first deputy mayor of Ouangani district, Dahalani Hamada.

"There's a garbage depot there, and people aren't allowed to live within 200 metres (yards) of it. When the first people moved in, we installed the water point, and that was sufficient for everyone at the time."

"Nobody thinks of us," said Kadafi, a 33-year-old man who said he arrived in Mayotte at the age of 10 years and had had his request for residence status rejected seven times.

"Many of us are foreigners, and many of us are undocumented, but there's not a single home which doesn't have a French citizen."

Come carry Mahama’s E-block away if you won’t open it and gi...
59 minutes ago