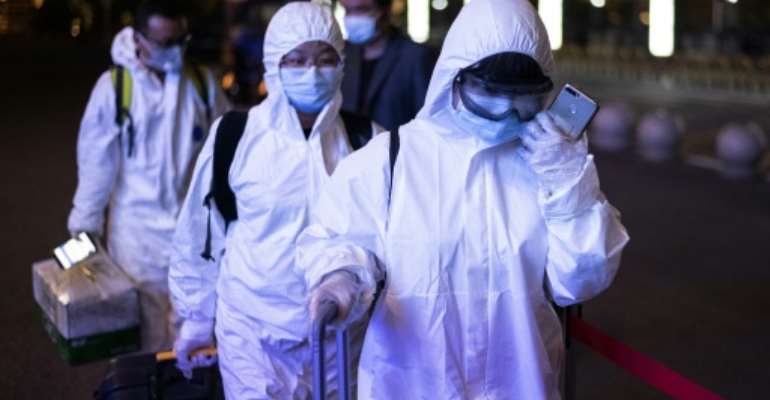 Passengers wear hazmat suits at a Wuhan railway station after a long lockdown was lifted. By NOEL CELIS (AFP)

Thousands streamed out of the Chinese city of Wuhan Wednesday after a lockdown on the birthplace of the coronavirus was lifted, offering a ray of hope even as Europe and the United States faced rising deaths and crippling economic pain.

As Wuhan reawakens, Western countries remain in the throes of a crisis that has claimed the lives of more than 80,000 people worldwide and forced around half of humanity into some form of lockdown.

The hardest-hit countries, among them Italy, Spain, France and the US, are grappling with how to balance public safety with the devastating impact of shutdowns that have erased millions of jobs, sent financial markets plunging and pummelled major industries from travel to construction.

In an alarming calculation of the economic costs, the French economy recorded its worst performance since 1945 during the first quarter, shrinking some six percent.

Germany's economy, the biggest in Europe, is also expected to fall into a "serious recession" and shrink by nearly 10 percent in the second quarter, leading researchers warned.

Yet health experts stressed it is too early to loosen restrictions that could accelerate the spread of a disease that has infiltrated every layer of society, from refugees to royals to Britain's Prime Minister Boris Johnson, who entered his third day in intensive care.

"Now is not the time to relax measures. It is the time to once again double and triple our collective efforts to drive towards suppression with the whole support of society," said the World Health Organization's regional director for Europe, Hans Kluge.

In the ground-zero city of Wuhan, who led the world with its unprecedented lockdown, strict measures appeared to have paid off.

Medical personnel in San Salvador stand in front of the monument to the Divine Saviour of the World which was lit up as a tribute to healthcare workers. By Yuri CORTEZ (AFP)

After a nearly 11-week travel ban was finally lifted, tens of thousands of people fled the city in joyous scenes that contrasted with the macabre mood around much of the world -- even if some passengers were travelling in hazmat suits.

Yet not all is back to normal, with schools still closed and travel discouraged.

At the train station a robot whirred through crowds to spray their feet with disinfectant as it played a recorded message reminding them to wear face masks.

A patient consults healthcare workers before being tested for COVID-19 at a clinic in Cape Town. By Barry Christianson (AFP)

Passengers also had to pass temperatures checks and show green "health codes" on their phone, which are calculated in part by whether their neighbourhoods have been declared virus-free.

"Wuhan has lost a lot in this epidemic, and Wuhan people have paid a big price," a 21-year-old man surnamed Yao told AFP.

"Now that the lockdown has been lifted, I think we're all pretty happy."

The mood was far bleaker in the United States, where the country mourned another 1,939 deaths over a period of 24 hours, according to a tally by Johns Hopkins University, bringing the nation's death toll to nearly 13,000.

President Donald Trump lashed out at the WHO, accusing it of a pro-Beijing bias as he threatened to cut funding.

The US president has criticised China's handling of the pandemic and questioned the accuracy of official statistics that show its deaths have slowed to a trickle.

Yet Trump himself has also come under fire for initially downplaying the virus by likening it to the flu and failing to adequately prepare the country's hospitals.

Medical staff around the world are working tirelessly in brimming intensive care units and makeshift hospitals erected in sports stadiums, on ships and even in an New York cathedral.

A health worker walks a patient through a disinfection chamber set tp in front of a hospital in Mitrovica, Kosovo. By Armend NIMANI (AFP)

Antonio Alvarez, a 33-year-old nurse at at Barcelona hospital, described his experience of the crisis as akin to bereavement.

"I've had my phases of anger, of denial, you go through all of them."

Hundreds are still dying daily in devastated Italy although the peak of the crisis appears to have passed, with the rise of infections hitting a new low.

Britain, meanwhile, is bracing for its most agonising days after another record 786 more deaths on Tuesday, while the prime minister's hospitalisation underscored the seriousness of the disease for many in a country that was slow to react.

A staggering 81 percent of the world's 3.3 billion-strong workforce has been affected by "the worst global crisis since the Second World War", according to the UN's International Labour Organization.

Governments around the globe are rolling out unprecedented stimulus measures, including a $1 trillion package in Japan.

A woman wearing a face mask amid concerns over COVID-19 walks past a graffiti of wings in Tokyo. By Behrouz MEHRI (AFP)

Yet the eurozone is mired in bickering over a bailout plan for its hard-hit members, with finance ministers unable to bridge the divide after 16 hours of talks that will now resume Thursday.

The economic fallout is biting hardest among the world's poor.

Mohamed Said, a carpenter and father-of-three queueing for food packages in Cairo, spoke for millions as he told AFP of his desperation.

"Since this crisis started we've been sitting at home and there's no money coming in," said the 36-year-old.

"We don't know how to feed our kids... and if, God forbid, something happens to any of them, I won't be able to foot a hospital bill," he said.