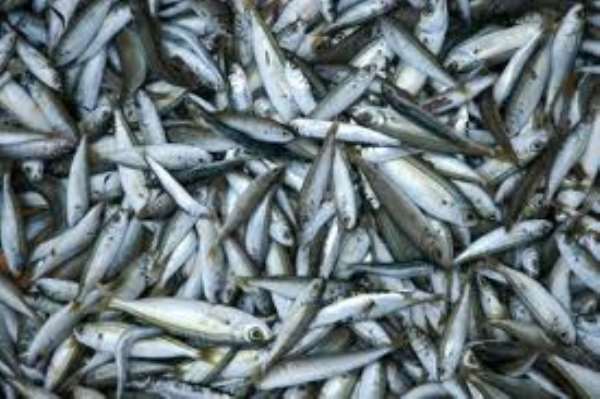 Ghana’s sardinella fishery provides food and livelihoods for coastal communities and is more important than ever as coronavirus spreads. It is under severe threat from illegal targeting by industrial trawlers in a trade known as ‘saiko’.

Now a report from the Environmental Justice Foundation has revealed that the samples of saiko sardinella it obtained were 99% juveniles. This is extremely worrying since these young fish are crucial to population recovery, says EJF, and sardinella are already on the brink of collapse, having crashed by 80% over the past twenty years.

‘Saiko’ is a destructive form of illegal fishing, where foreign trawlers target the main catch of Ghanaian canoe fishers, transfer it at sea to specially adapted boats, and sell this stolen fish back to local communities at a profit.

Last year, EJF’s research revealed that in 2017 alone this trade took around 100,000 tonnes of fish, costing Ghana millions of dollars in revenue and threatening food security and coastal livelihoods. According to a recent assessment by the United Nations Food and Agriculture Organization, the sardinella fishery shared between Ghana, Côte d’Ivoire, Togo and Benin is near total collapse.

In the new study, EJF examined 18 blocks of Saiko fish landed at Elmina: sardinella were present in two-thirds of the blocks and 99% of them were juveniles below minimum legal landing size. The NGO also examined the by-catch landed by trawlers and found a very similar picture: 99% of the sardinella were below legal size.

Trawling with illegal nets, with a mesh size smaller than the legal minimum, is a major problem in Ghana. EJF has testimony from crew and fisheries observers working on industrial vessels stating that such nets are routinely used.

A fisheries observer, who preferred not to be named, told EJF: “We have the approved net to be 60 mm in measurement. But some of them don’t use those nets – they use mesh which is less than the 60 mm…If they use those nets, the fingerlings [juvenile fish] will not be able to go out. So, by the end of the day, they will bring [catch] everything.”

A crew member said: “The nets that we trawl with are the bigger size mesh nets but the captain wants to catch plenty fish so he puts small mesh size nets into it.”

An urgent crackdown on saiko is needed, says EJF. Although saiko transhipments, under-size mesh nets, and landing juveniles are all illegal practices, as clearly laid out in Ghanaian law, they are often allowed to continue unchecked. When sanctions are given out, they are inconsistent and weak. For instance, the statutory minimum fine for use of illegal nets and landing juveniles under Ghana’s 2014 Fisheries Amendment Act is US$1 million, yet there are numerous cases of vessels refusing to pay or paying lower sums and then being re-licensed to continue fishing.

This year the government committed to banning all domestic and international vessels found to be engaging in saiko from operating in Ghanaian waters. It must keep this vital pledge, says EJF, as well as immediately investigating all suspected cases of saiko fishing and prosecuting cases transparently through the court process.

Thorough inspections of the landings of industrial trawlers are needed to ensure they are only targeting species of the type and size dictated by their licence, and that the landed fish are above the minimum legal size.

Executive Director of EJF Steve Trent says: “In a time when the world is facing coronavirus, stable livelihoods and food security are even more crucial than before. Ghana’s fisheries are in crisis, with the country now forced to import half its fish, and canoe fisherfolk coming home from sea empty-handed. The state is losing millions of dollars every year in revenue. The government has the ability to stop this illegal and highly damaging activity now, and it must act to do so without delay.”

• Of the saiko blocks that contained sardinella, the fish made up between 0.3% and 44.6% by weight of individual blocks.

• According to Ghana’s fisheries laws, saiko is punishable by a fine of between US$100,000 and US$2 million, with the minimum fine increasing to US$1 million where catches involve juvenile fish or the use of prohibited fishing gears. To serve as a deterrent for potential offenders, it is imperative that at least the minimum fine set out in the law be imposed.

• The trawlers are owned almost exclusively by Chinese operators, who use Ghanaian ‘front’ companies to bypass laws forbidding any foreign ownership or control of industrial trawl vessels flying Ghana’s flag. EJF has revealed that over 90% of industrial trawlers licensed in Ghana are linked to Chinese ownership.

• New vessels have continued to arrive from China, despite a February 2012 moratorium on new industrial trawlers entering Ghanaian waters to address severe depletion of fish stocks. Of the 68 industrial trawl vessels licensed to fish in Ghana from March-June 2018, at least half were built in 2013 or later, after the moratorium on new or replacement vessels came into effect.

• Over 2 million people in Ghana rely on the country’s coastal fisheries for their food and income.

• While canoe fishing offers direct employment for around 60 fishers for every 100 tonnes of fish, saiko means only 1.5 jobs per 100 tonnes – 40 times fewer.

• Read a summary of the legal opinion on the practice of saiko under Ghanaian law.

“Sometimes I tell them [the captain] due to the net they are catching small small fish which is not good…so they have to change the net. But they won’t mind me, they will do what they want to do.”

The Environmental Justice Foundation is an international non-governmental organisation working to protect the environment and defend human rights. EJF is a charity registered in England and Wales (1088128). www.ejfoundation.org

Your dictatorial, political bloodshed will be responded, we ...
19 minutes ago