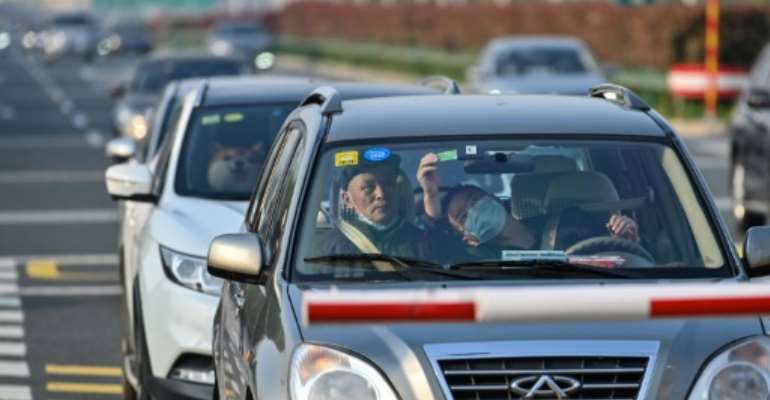 Tens of thousands were expected to leave Wuhan after travel bans were lifted. By Hector RETAMAL (AFP)

Thousands of relieved citizens streamed out of China's Wuhan on Wednesday after authorities lifted months of lockdown at the coronavirus epicentre, offering some hope to the world despite record deaths in Europe and the United States.

China has come under fire for its handling of the coronavirus crisis that originated there late last year and President Donald Trump threatened to cut US funding to the World Health Organization over perceived bias towards Beijing.

From Wuhan, the coronavirus spread rapidly to infect nearly every country on Earth, killing more than 80,000, battering the global economy and forcing around half of humanity into some form of lockdown.

Its march across the planet has affected every level of society from workers to royals, with Britain's Prime Minister Boris Johnson fighting the illness in intensive care.

But the joy of people finally free to leave -- many of them queuing up to depart in hazmat suits -- provided some cheer to a gloomy world, offering proof the virus would not last forever.

"You have no idea! I was already up around 4am. I felt so good. My kids are so excited. Mum is finally coming home," said Hao Mei, a 39-year-old single mother rushing to nearby Enshi to see her young children for the first time in two months.

A robot whizzed through crowds of passengers at the station, spraying their feet with disinfectant and playing a recorded message reminding them to wear face masks.

While China celebrated its first day without coronavirus deaths on Tuesday, the relentless disease chalked up fresh milestones in hard-hit areas of Europe and the US.

A total of 1,939 people died in the US over the past 24 hours, according to a tally by Johns Hopkins University, as the country approaches tolls in worst-hit Italy and Spain.

US President Donald Trump threatened to cut off funding for the World Health Organization, accusing it of bias towards China. By Mandel NGAN (AFP)

Virus deaths hit a new daily high in Britain, where 55-year-old leader Boris Johnson was said to be "stable" and in "good spirits" despite receiving oxygen treatment in intensive care.

And Paris toughened its lockdown measures, banning daytime jogging to keep people from bending the rules as France breached 10,000 deaths.

In New York, Governor Andrew Cuomo said the state appeared be nearing the peak of its pandemic but urged citizens to continue staying indoors.

Trump, under fire for his own response to the virus, lashed out at the WHO and said there would be a "hold on money" provided to the UN body, which he accused of being "very China-centric."

Exhausted medical staff around the world are battling with a stream of patients as makeshift hospitals spring up on ships, at hotels and even in a New York cathedral.

In Barcelona, Antonio Alvarez, a 33-year-old nurse working in intensive care, said his experience of the pandemic was akin to bereavement.

"I've had my phases of anger, of denial, you go through all of them.

The global economy is also on life support as governments pour in unprecedented sums to stem the worst crisis many countries have seen in a century.

While Japan agreed a stimulus package worth around $1 trillion, a divided eurozone is battling over whether to pool debt for "coronabonds" to prop up the economy.

Individuals have also stepped in, with Twitter co-founder and chief executive Jack Dorsey committing $1 billion of his personal fortune to the coronavirus fight.

And the stock market continued its rollercoaster ride, the Dow Jones index soaring around 1,000 points on Tuesday before ending up slightly lower.

The UN's International Labour Organization said 81 percent of the world's 3.3 billion-strong workforce is now affected by "the worst global crisis since the Second World War."

Mohamed Said, a carpenter and father-of-three queueing for food parcels in Cairo, spoke for millions as he told AFP of his desperation.

"Since this crisis started we've been sitting at home and there's no money coming in," said the 36-year-old.

"We don't know how to feed our kids... and if, God forbid, something happens to any of them, I won't be able to foot a hospital bill," he said.

Others have been using their skills to try to lift the gloom.

In Copenhagen, a troupe of circus performers juggle and do tricks from a courtyard for those stuck at home and watching from their windows.

"I hope that in all this catastrophe we can get something good out of it for the arts," said artist Mogens Petersen.

Police arrest Funny Face after threatening to kill mother of...
14 minutes ago

Police comb for Shatta Wale after reportedly shot
21 minutes ago