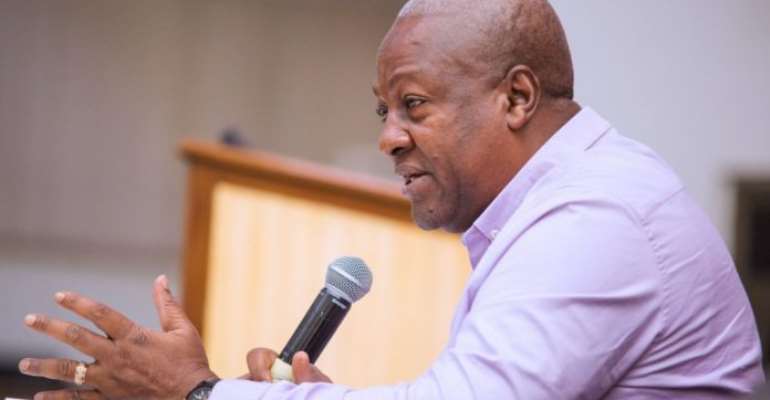 Former President John Mahama has condemned the shooting to death of a civilian at Ashaiman in the Greater Accra Region by a soldier who was enforcing lockdown directives.

While eyewitnesses say the soldier deliberate shot and killed the unarmed civilian, the Ghana Armed Forces, in a statement, claimed the man had attempted disarming the solider during a scuffle which caused the soldier’s rifled to “accidentally” go off.

The army claimed in its statement that the soldier was trying to arrest the civilian in connection with a narcotics offence.

The Member of Parliament for the Constituency, Mr Ernest Henry Norgbey, has, however, accused the military of trying to cover up the incident.

Adding his voice to the condemnation, Mr Mahama, in a write-up, said: “On Sunday, we also received the sad confirmation of the death of a young man at Ashaiman following a shooting incident involving a security officer.

So far, Ghana has recorded five deaths out of the 287 confirmed cased.

The flag bearer of the National Democratic Congress described the jump two hundred fourteen to the current figure as “alarming”, adding: “While the GHS ascribes the sudden increase in numbers to enhanced surveillance and testing, it is a call to arms to redouble our efforts in battling this disease”.

More Headlines
ModernGhana Links
I wanna sleep in jail for this — says Shatta Wale whiles leaving Court room
Foreign Ministry officially announces death of Ghana's Ambassador to Italy
Akufo-Addo to launch "Operation Clean Your Frontage" campaign at Independence Square
Government is committed to resourcing the Office of the Special Prosecutor - Akufo-Addo
Handling LGBTQ+ issue in a correct manner will be a credit to Ghana’s democracy – Akufo-Addo
Komenda Sugar factory 'collapsed' under Mahama; if not, why didn’t they go for that $24 million for raw materials? – Akufo-Addo
Jesus Ahoufe remanded, to appear in court on Monday
LGBTQ+: I was impressed by intervention of very renowned, well-positioned people – Akufo-Addo
Go complete Aflao E-block if you're giving ultimatum to my minister – Sarcastic Akufo-Addo tells angry Togbui Fiti
TOP STORIES