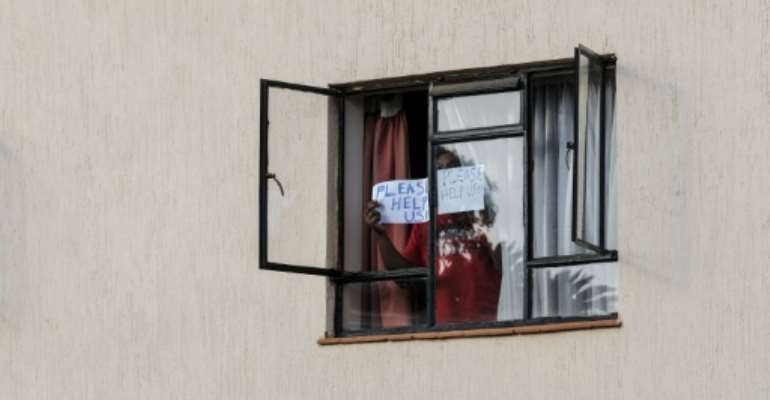 A man in mandatory quarantine in Kenya holds a sign reading "help me" out of the window of a facility in Nairobi. By - (AFP)

Hundreds of people held under mandatory quarantine in Kenya after returning from abroad are up in arms after the government extended their confinement for another 14 days.

Around 2,000 people were placed in forced quarantine as they arrived in the country from March 22 until international flights were banned three days later, a chaotic process criticised by some passengers as likely to have helped spread the virus.

Mixed with those who had been in contact with patients who tested positive, the quarantined Kenyans and foreigners make up some 80 percent of the country's coronavirus patients.

As of Monday at 1400 GMT the country had recorded 172 cases and six deaths.

Health ministry guidelines initially said that those quarantined would be tested after five days and if their results were negative they would be sent home to self-isolate. Those testing positive would be taken to treatment centres.

An unknown number were discharged. However the rest who had hoped for freedom after their two weeks were up were stunned when the government on Saturday ordered a 14-day extension of quarantine for those in facilities that had registered a positive case.

Those hoping for freedom after their two weeks quarantine were up were stunned when the government ordered a 14-day extension. By - (AFP)

"We are now asking to go home. They test us, if you're positive, go to hospital, if you're negative, go home," said one of those stuck in quarantine who requested anonymity.

Some of those confined are contesting the move and have sent legal letters to the police and health ministry, which were seen by AFP, demanding their immediate release.

"We are aware that this may be inconveniencing to some but in the interest of protecting the public, it is nonetheless very necessary," Health Minister Mutahi Kawge said on Tuesday.

Another person in quarantine, using the pseudonym Luke, told AFP the whole process had got off to a bad start.

Upon his arrival at the international airport in Nairobi on March 24, he said passengers were rounded up by aggressive police officers who were not wearing protection gear.

He described "hundreds of people, tense, sweating, in a small space, in an airport that has turned off its ventilation" who after hours of waiting were herded into crowded buses.

The passengers have been forced to pay for their own accommodation, from $20 to $90 a night in often unsanitary conditions. By - (AFP)

"There are no doctors or medical staff anywhere. There is no hand sanitiser. There are no gloves. There are no masks. It's after midnight and everyone looks broken," he recalled.

The passengers have been forced to pay for their own accommodation, from $20 (18 euros) to $90 a night in often unsanitary conditions.

"The meals mimic prison rations, and there aren't enough for everyone," Luke said.

On Sunday, after learning their confinement would be extended, Sheila posted a video on social media denouncing conditions at a school in Nairobi where she was being held.

"We don't have water at times, we lack soap, we don't have masks," she said in the video, adding that they had to wash their own clothes.

She told AFP that five people who had been tested on March 29, and found out on April 2 they were positive for coronavirus, were not removed from the school until two days later.

"We came back to our own country. It's like we're getting punished for coming home," she said in the video.