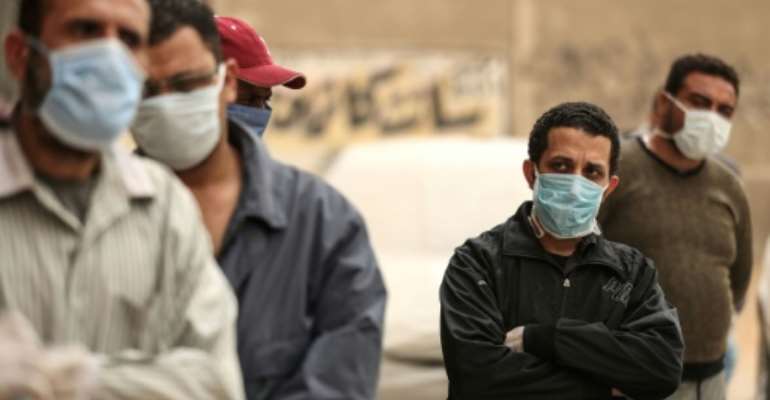 Haggard and dishevelled from the stress of making ends meet, day labourers line up in Cairo for food parcels after losing their jobs to the sharp downturn caused by the coronavirus.

Sayed Shaaban, 42, who used to work in a cafe, said for him the pandemic is not just a health scare but a crushing blow to his already precarious livelihood.

Wearing a mask and gloves, he waited in line outside a charity centre affiliated with the Egyptian Food Bank (EFB) in Salam City, a poor neighbourhood of eastern Cairo.

"You see how I have only one functioning arm -- I used to serve drinks and get paid," he told AFP.

The Egyptian Food Bank is committed to shipping out an initial lot of 500,000 food cartons throughout the country's 27 governorates with around 5,000 charities distributing the parcels. By Mohamed el-Shahed (AFP)

"But now there's not even one piastre coming in."

EFB, a large Cairo-based charity, has been at the forefront of a public relief effort in the most populous Arab country.

One third of Egypt's population of more than 100 million lives in poverty, surviving on about $1.50 or less a day.

For many who were already struggling, meagre incomes have vanished since a curfew was imposed on March 24 to stem the spread of the virus.

Egypt has so far recorded 85 deaths out of 1,322 confirmed cases of the COVID-19 respiratory disease.

Shaaban, a father of two young children from Salam City, has been housebound since his local "baladi" cafe was shuttered.

Food boxes await distribution to those left in severe poverty due to Egypt's lockdown. By Mohamed el-Shahed (AFP)

"We have no social insurance to fall back on since the cafe has been closed," he said.

"I wouldn't have come here if I wasn't in need."

Mohamed Said, 36, a carpenter and father of three queueing behind Shaaban, said that "since this crisis started we've been sitting at home and there's no money coming in."

"We don't know how to feed our kids .... and if, God forbid, something happens to any of them, I won't be able to foot a hospital bill."

Egypt's official unemployment rate is around 10 percent, and more than five million people work as day labourers in the informal economy, the government estimates, often without any form of social protection.

EFB director Mohsen Sarhan said his charity is working to deliver 10,000 food parcels a day, containing staples such as rice, pasta, oil, sugar and canned beef -- far less than what is needed by the hundreds of thousands of struggling families.

"We felt the economy slowing down with the coronavirus pandemic, so on March 19 we launched an initiative aimed at aiding a large cross-section of society who would be adversely affected," he said.

Millions of pounds in donations have poured in over the past month, but the demand to alleviate the suffering of the working poor is at an all-time high.

EFB is committed to shipping out an initial lot of 500,000 food cartons throughout Egypt's 27 governorates with around 5,000 charities distributing the parcels.

"We are in an emergency situation," Sarhan said. "We need to feed hundreds of thousands of people in a period of weeks ... time is very critical here."

President Abdel Fattah al-Sisi on Monday issued a directive to provide day labourers 500 pounds (just over $30) per month for three months to ease their financial hardship.

But experts say this will only partially cushion the blow.

The Egyptian Food Bank has been at the forefront of a public relief effort but the demand to alleviate the suffering of the working poor is at an all-time high. By Mohamed el-Shahed (AFP)

"The pandemic is certainly going to mean a massive increase in the numbers of working poor in countries such as Egypt," said Adam Hanieh, who researches labour issues in the Arab world at London's School of Oriental and African Studies.

The virus and its economic impact could spawn "a range of unpredictable and unexpected consequences," he said, pointing to "significant disruptions in food supplies" and "enormous pressures on the country's healthcare system".

"This will undoubtedly provoke social protest and -- if Egypt's history is any guide -- a ratcheting up of repression and the increased use of authoritarian measures," Hanieh warned.

"The situation has made me want to up and leave everything -- but I can't just leave my family", he said.

"We're not begging, but life has well and truly stopped."