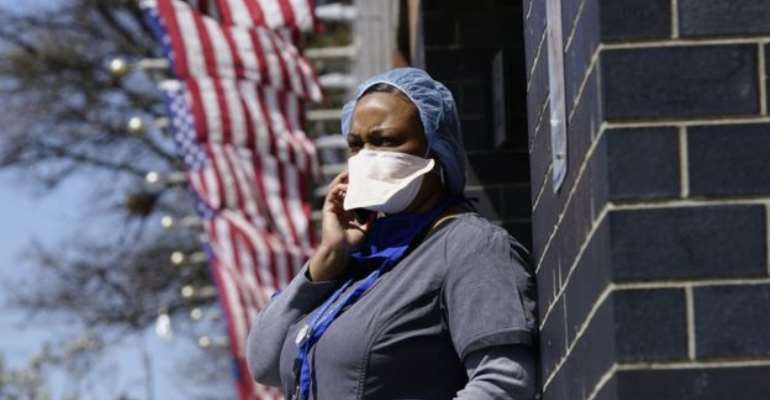 Stark statistics from Chicago health officials have underscored the heavy toll of coronavirus on black Americans.

Black Chicagoans account for half of all coronavirus cases in the city and more than 70% of deaths, despite making up 30% of the population.

Globally there have been nearly 75,000 deaths and more than 1.3m cases total.

What do Chicago's statistics show?

Chicago has seen a total of 98 deaths as of Sunday, with 72% of them black residents.

The disparity is reflected across the state, where black people account for 41% of Covid-19 deaths, despite making up 14% of the population of Illinois.

She said city inspectors would be sent into shops to ensure everyone was adhering to social distancing guidelines.

Mayor Lightfoot also raised the possibility of curfews in areas where people gathered outside liquor stores, reports the Chicago Sun-Times .

Though the coronavirus has been called the "great equalizer", data suggests that vulnerability to the infection may vary by neighbourhood.

In Michigan, African Americans make up 14% of the population, but they account for 33% of the coronavirus cases and 41% of deaths, figures from the state health department showed on Monday.

White residents account for about 23% of recorded cases in Michigan and 28% of deaths, according to the data.

Detroit, Michigan, is about 80% black, and the city together with its surrounding suburbs accounts for around 80% of confirmed coronavirus cases.

A similar disparity has emerged in Milwaukee, Wisconsin, one of the most segregated cities in the US.

African Americans made up almost half of Milwaukee County's nearly 1,000 cases as of last Friday and 81% of its 27 deaths, despite black people accounting for 26% of the population there, according to a study by ProPublica .

In hard-hit Louisiana, more than 70% of the people who have died of Covid-19 are black, despite African Americans making up 32% of the Gulf state's population.

Some 40% of Louisiana's coronavirus deaths have occurred in the New Orleans area, where the majority of residents are black.

Health officials have previously said the Big Easy's residents suffer from rates of obesity, diabetes and hypertension that are higher than the national average, making them more vulnerable to Covid-19.

What's behind the disparity in Chicago?

Dr Arwady told reporters that even if everyone in the city did have access to a doctor, "we would still see significant health disparities because of food deserts and lack of walkable streets".

Dr Cameron Webb, an African-American physician who is running for Congress in the US state of Virginia, told BBC News that US racial and economic disparities were being amplified by the pandemic.

"It really exposes our society's fault lines," he said.

Alderman Jason Ervin, who chairs Chicago council's black caucus, told the Chicago Tribune that "rates of non-compliance in some parts of the city with the stay-at-home orders" might also be contributing to the statistics.