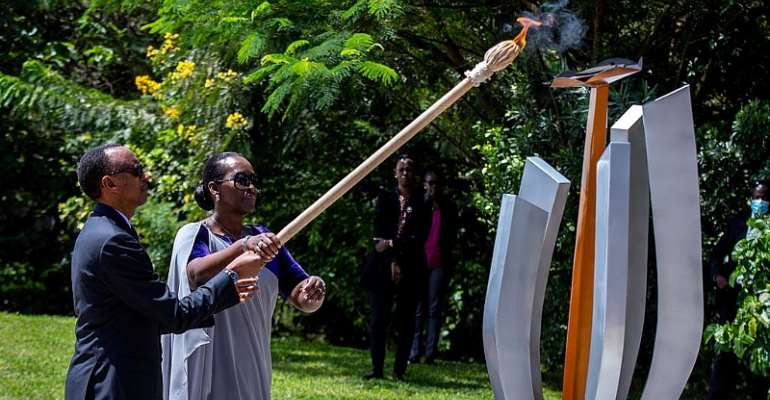 Every 7 April since 1994, Rwandans have paused to remember the 800,000 victims killed during the genocide. But on Tuesday, 26 years on, many were forced to pay their respects at home because of the coronavirus. A nationwide lockdown in France also pushed commemorations behind closed doors.

This year, there were no night vigils or the annual Walk to Remember that have traditionally marked Rwanda's genocide commemorations.

Only a small delegation led by President Paul Kagame visited the Gisozi memorial site in the capital Kigali on Tuesday, where the president lit the flame of remembrance and addressed the nation.

Rwandans were able to follow the events live on television or via social media from their homes. No groups however were allowed to visit any of the genocide memorials.

The national commission for the fight against genocide said commemoration activities would be conducted differently due to the coronavirus outbreak.

Rwanda has 105 confirmed cases of Covid-19, and last week the government extended the lockdown by a fortnight.

Discussing trauma
While some Rwandans have expressed disappointment at the low-key celebrations, others are making the most of the confinement.

"I'm going to use the time to talk with my kids about the genocide," says Egide Nkuranga, vice-president of the Ibuka organization for Genocide survivors.

"I will ask them questions and respond to theirs. The only problem though with commemorating something like this at home, is that it can cause mental health problems," he told RFI.

Rwandan authorities have put in place a special helpline for victims and survivors suffering from post-traumatic stress.

The fight must go on
The genocide began on the night of 6 April, 1994, when a plane carrying Rwanda's then-President Juvenal Habyarimana and his counterpart Cyprien Ntaryamira of Burundi - both ethnic Hutus - was shot down.

The minority Tutsi ethnic group and Hutu sympathisers were blamed for the assassination, which they denied, and bands of Hutu extremists began the massacres with support from the army, police and militia groups.

Neighbours killed neighbours and Hutu husbands even murdered their Tutsi wives out of fear for their own lives.

In a statement on Tuesday, Moussa Faki Mahamat, the chairman of the African Union Commission, said the commemoration should be used as an opportunity to continue to fight genocide.

Meanwhile in France, where a nationwide lockdown is also in place, political leaders, including Paris' mayor Anne Hidalgo, said the country would never forget this "human barbarity," in which "[up to] one million men, women and children lost their lives."

This year was the first time that France has commemorated the Rwandan genocide - at President Emmanuel Macron's request.

France was an ally of the government of late Hutu President, Juvenal Habyarimana, whose fatal plane crash triggered the mass slaughter.

Kigali has long accused its French ally of training the militias who carried out the attacks.

Last year, Macron appointed a panel of experts to investigate Paris' alleged role in the 1994 genocide. The panel's findings will not be released until 2021, but on Sunday experts handed the president their initial report.