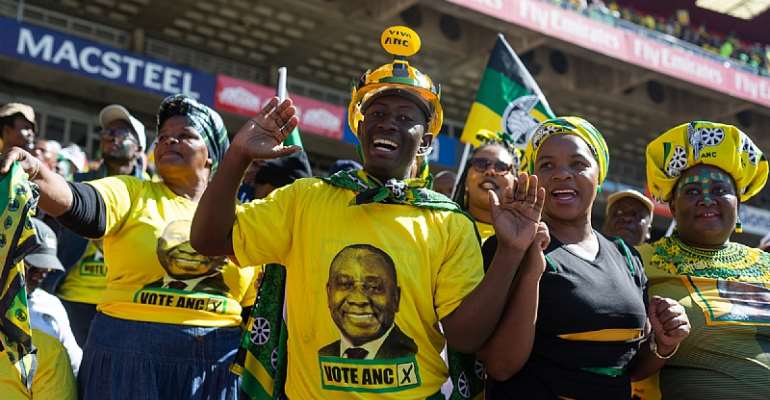 The ANC, which has governed South Africa since 1994, has failed to deal decisively against corruption in its midst. - Source: EFE-EPA/Yeshiel Panchia

In evidence before a commission of inquiry investigating corruption, South Africans have been treated to shocking revelations about brazen looting of state coffers. Ín his new book , Anatomy of the ANC in Power: Insights from Port Elizabeth, 1990—2019, Mcebisi Ndletyana shows how the governing African National Congress (ANC) failed to enforce a strict moral code to guide its conduct in government when it took power in 1994 , which laid the ground for malfeasance. Below is an edited extract from the book.

“Amandla, ANC, ANC!” (Power, ANC, ANC!), the chants reverberated throughout the municipal chamber. It was just after 3pm on 6 November 1995. The commotion was unusual for the customarily restrained municipal council proceedings.

It marked a similarly rare occasion.

For the first time in its 134-year history, the port city of Port Elizabeth, on eastern shore of South Africa, had elected a black man, Nceba Faku , as its 53rd mayor. Faku's election, on an ANC ticket, followed a string of white males who had occupied the mayoralty since the establishment of the municipality in 1861. Unlike his predecessors, Faku had served two stints in prison and was once denounced as a terrorist for his role in the struggle against apartheid.

His election was truly a signal that the democratic change that started in the country in 1994 , had not only permeated throughout the structures of governance, but was also irreversible.

In reality though, local government remained largely untransformed throughout the 1990s. New legislation was still relatively absent. This lacuna allowed for the continued application of old apartheid practices. One of these was allowing councillors to adjudicate over the allocation of tenders. Previous councillors had abused this to advance their own their business interests.

The new democratic city council proceeded in a similar fashion, and council regulations allowed councillors to enter into business contracts with the municipality. Before doing so, however, they had to secure consent from the council and exempt themselves from any decision-making process related to their interests.

But, councillors did not always seek consent to bid for municipal work.

Using the opportunity offered by their presence in council for business interests, or to generate alternative sources of income, was enticing for the new councillors. They only received allowances. For those to whom the allowance was the only source of income, being a councillor was an attractive opportunity to augment one's income.

It was common for councillors, says Errol Heynes – who was deputy mayor at the time – to be approached by business people with bribes to vote for their being awarded a tender. According to Mthetheleli Ngcete, who was one of the councillors, some councillors approached them with stacks of money showing that they had been bribed.

Involvement in business also pitted councillors against each other. Some clashed over the same business deal. A prominent example happened in the late 1990s, over the plot of land where the Boardwalk Casino and Entertainment World complex stands today.

It involved two companies, Emfuleni Resorts and Siyalanda Property Development. Siyalanda Property Development was publicly associated with councillor Sicelo Kani, while unconfirmed names of some councillors were connected to Emfuleni Resorts. Both companies made a bid for the same plots. The council could not decide, for a considerable period of time, which of the two companies should be sold the plots.

The council seemed to prefer selling to Emfuleni, whereas the executive committee appeared to favour Siyalanda. Emfuleni eventually built the casino, following a court decision in February 2000. Instead of insisting on buying the land, Emfuleni had switched to the easier option of leasing, to which the municipality agreed.

Before the lengthy wrangle was resolved, however, it had wrought serious damage on the ANC. In the midst of the impasse the executive committee was reshuffled. Five of its members – Mandla Madwara, Rory Riordan, Mcebisi Msizi, Khaya Mkefa and Errol Heynes – were removed. The dismissal was unceremonious.

They were not directly informed of their removal, but read about it in the newspapers. Madwara, Msizi and Heynes were, at the time, away in China on council business. Mike Xego, a prominent local ANC leader, narrates the story rather theatrically:

The ANC justified the reshuffle on the grounds of supposed poor performance by the five councillors. Heynes was personally blamed for the ANC's poor showing amongst coloured voters in the 1999 national elections that had taken place earlier that year. The term 'coloured' is an apartheid-era label used to refers to people of mixed European ('white') and African ('black') or Asian ancestry.

Madwara and his colleagues accepted the decision, but rejected the supposed reasons for their removal. The claim that Madwara and his colleagues were fired on account of poor performance was spurious. It assumed that their performance would have been evaluated. None of them were. Ngcete, who succeeded Madwara as chairperson of the municipalily's executive committee, also does not recall ever being subjected to a performance evaluation when he was a councillor.

Close scrutiny of the municipal performance disputes the assertion of poor performance. The mayor, Faku, with whom they occasionally disagreed, was complimentary about their performance. In his mayoral speech, made on 23 September 2000 – a year after the reshuffle – Faku singled out Madwara and Riordan as deserving of special praise for gaining the Port Elizabeth Municipality “the reputation as one of the most competent municipalities in the country”.

Ismael Momoniat, deputy director-general at the country's National Treasury, recalls Riordan as a particularly competent city treasurer (as they were called then). As a result, according to Heynes, the municipality enjoyed a triple-A rating, which meant that its finances were sound, had reserves and could easily borrow.

Incompetence had nothing to do with the reshuffle. The real reasons, according to Mabhuti Dano, were their involvement in business and lack of accountability. They had used their positions in the executive committee, Dano explains, to advance their business interests.

Even if Madwara and his colleagues had business interests, they were not the only ones in positions of influence with such. The mayor, Faku, was a director at the construction company, Murray and Roberts, but survived the chop. Just as the 1990s came to a close, it became apparent that disputes were not settled objectively, but were swayed by personalities and factional support one enjoyed within the organisation.

Mcebisi Ndletyana's book, Anatomy of the ANC in Power: Insights from Port Elizabeth, 1990 - 2019. , is published by HSRC Press.

Mcebisi Ndletyana receives funding from the National Institute for Humanities and Social Sciences.