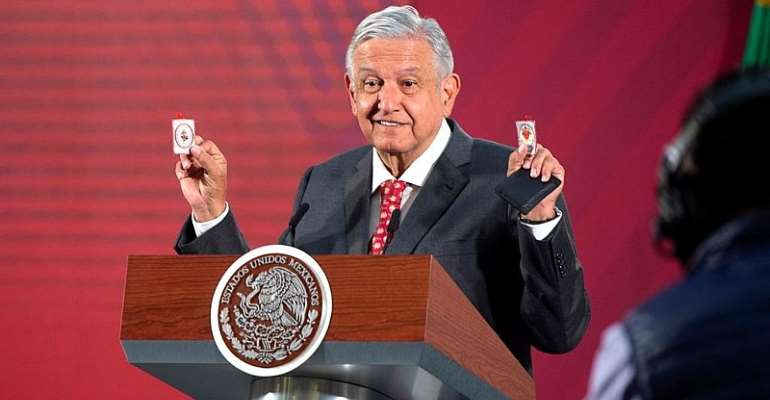 Mexico's President Andres Manuel Lopez Obrador has delivered a State of the Nation address on how he plans to lift the country's desperate economy out of the coronavirus crisis. But as world governments unveil unprecedented spending packages to limit the damage to their economies, his message of fiscal discipline has sparked sharp criticism.

In the nearly deserted National Palace, Lopez Obrador delivered his speech in the heart of Mexico City, where he's chosen to live as well as work, during the six years of his presidency.

A maverick by nature, Lopez Obrador has eschewed the plush presidential palace of Los Pinos, slashed his salary by 60 percent, and scrapped the previous government's plans for a new airport at Texcoco in favour of upgrading an air force base at Santa Lucia.

He's put the presidential plane up for auction, preferring to fly on commercial airlines.

Andres Manuel Lopez Obrador (a.k.a. AMLO), who's from the southern state of Tabasco, won the presidency on his third attempt. After 18 long years of trying, now he's determined to enjoy the fruits of his lifelong labour.

With his country under a loosely defined lockdown, he has refused to go into self-isolation, saying his political rivals will take over the country if he does.

Until recently, AMLO has elected to conduct daily business, including tours across the country, almost as normal. The 66-year-old suffered a suffered a heart attack in 2013, which puts him in the appreciably higher end of the risk barometer during the Covid-19 pandemic.

Nevertheless, a couple of weekends ago, he visited the northwestern state of Sinaloa. He set aside social distancing and shook hands with Maria Consuelo Loera Perez, the 92-year-old mother of Joaquin “El Chapo” Guzman, the former leader of the notorious Sinaloa drug cartel, who is serving a life sentence the United States.

“Chapo”, or “Shorty” in English, long proved a law and order liability due to his knack for jail-breaking. His extradition and incarceration far from Mexico was deemed necessary -- he had escaped from two of Mexico's so-called “Laximum” Security Prisons.

During his brief encounter with El Chapo's mother, the president assured her that he had received her request for help in order to visit her son in the US.

Even before his State of the Nation address, Obrador let it be known that during this crisis, his efforts will be focused on helping the poor, elderly and needy, with the greedy left to fend for themselves. He insisted: “Wealth isn't contagious. We need to ensure a better income distribution.”

AMLO often spits out the word "neoliberal" as the sum of all evil, stressing it must be combated and counterbalanced at all costs.

He pledged to create two million jobs during the next nine months. But the business sector and employers organisations warned that the coronavirus has put 18 eighteen million jobs in serious jeopardy.

Mexico heavily depends upon its tourism and service industries, which are already under intense strain. The national currency the peso has lost ten percent of its value in as many days.

The president says he's earmarking the equivalent of 13 billion dollars for the energy sector. But the State Petroleum Company PEMEX, a cash cow for umpteen administrations due to the lack of an effective taxation system, is almost literally upside-down. It needs at least seven times as much as this, or more.

Lopez Obrador's ever-present ambition to build a new oil refinery by the mid-point of his term, now looks a lot further away than it did at Christmas.

He's promising generous loans for small and family businesses as well as pensions for more than eight million elderly people. But experts warn that the Mexican economy could shrink by as much as 10 percent this year.

However, the president remains confident: “This crisis is temporary.  Normality will soon return. We will defeat the coronavirus, and revitalise the Mexican economy.”

Depending on how long it takes, the loss of life involved and the loss of jobs which will follow, a re-evaluation might well be needed.