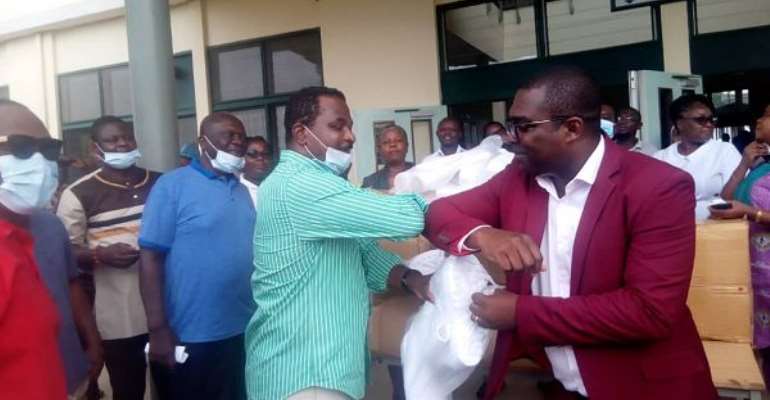 The former President and flagbearer of the National Democratic Congress (NDC), Mr John Dramani Mahama has presented Personnel Protective Equipment (PPEs) to the Cape Coast Teaching hospital to support the fight against COVID-19.

The items including 50 pairs of rubber boots, masks, gloves and overall, sanitizers and liquid soap were presented on his behalf by the Member of Parliament for Cape Coast South, Mr Kweku Ricketts Hagan and the parliamentary candidate for Cape Coast North, Dr Kwamena Minta-Nyarku today [April 7, 2020].

Mr Hagan said the presentation was part of planned presentations to be made by Mr Mahama to all regional hospitals across the country to compliment efforts by government and other well-meaning organizations and individuals against the corona virus pandemic.

He stated that the fight against the pandemic required all hands on deck and oneness of commitment and resolve to work to contain the spread of the disease, adding that it was important for all to commit their little and their much to support the fight.

Frontliners
Mr Hagan noted that while government and citizens all worked to abide by the restrictions and protocols in this period, the sacrifices of the front line workers particularly health workers could not be overlooked.

“They are playing critical roles in the fight against the COVID-19 and it is only right that we support efforts to get them the right protective equipment for their work,” he added.

He said Mr Mahama shared in the concerns of health workers over the unavailability of PPEs and the gesture was to help ensure that they were equipped for the fight against the disease.

He said he was hopeful the presentation would boast the morale of the health workers as they fight against the pandemic adding that the items would be handed over to the treatment centre set up at the hospital in readiness of possible COVID 19 cases.