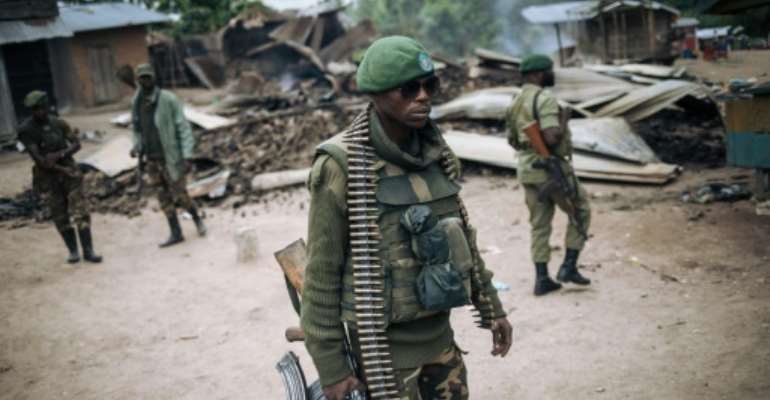 The DR Congo army launched an offensive against the ADF in October 2019. By Alexis Huguet (AFP/File)

Five men and a child were killed in an overnight attack blamed on the Allied Democratic Forces (ADF) militia near the eastern DR Congo city of Beni, cut off because of the coronavirus pandemic, local sources said Tuesday.

In a measure aimed at curbing the spread of COVID-19, the region's main three cities of Beni, Goma and Butembo have been cut off from the rest of North Kivu.

If no further Ebola cases emerge, the epidemic is set to be declared over on April 12, after claiming more than 2,200 lives.

Of the 180 cases of coronavirus recorded in the DR Congo so far, including 18 deaths, at least one case was detected in Beni.

Attacks on civilians by the ADF, accused of having massacred more than 1,000 civilians since October 2014, have decreased in recent weeks.

November last year saw an upsurge of attacks, with ADF fighters killing civilians in reprisal for army operations launched against them in October.

Experts say nearly 400 have been killed since then.

It then fell back to North Kivu, DR Congo's border province with Uganda, during the Congo Wars of the 1990s