By Amaury Hauchard with Armel Baily in Ouagadougou 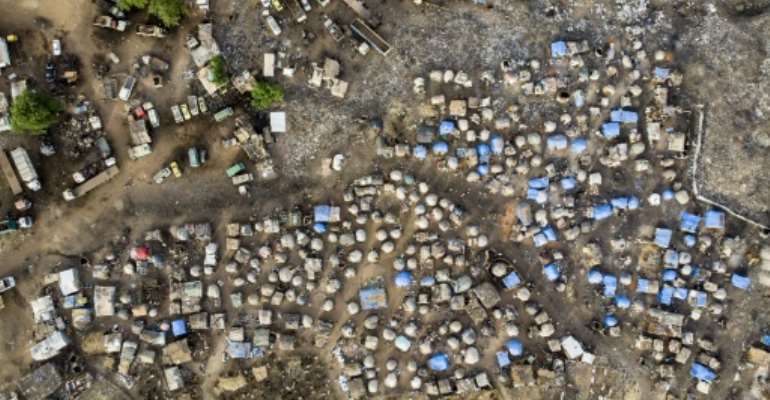 The Sahel is dotted with camps housing hundreds of thousands people who have fled jihadist violence. By MICHELE CATTANI (AFP)

The rise of coronavirus in the war-torn Sahel has sparked sharp fears for the region's hundreds of thousands of displaced people, often packed inside camps.

"If we have coronavirus here, it will be a catastrophe," said Hamadoun Boukary Barry, who lives in a camp for refugees and displaced people outside the Malian capital Bamako.

Already among the poorest countries in the world, Mali, Burkina Faso and Niger are struggling to contain jihadist insurgencies that have forced about a million people to flee their homes.

Many are housed in camps scattered across the Sahara's southern rim -- facilities that lack basic amenities and where people live cheek-by-jowl in small tents.

Barry, a white-bearded grandfather, fled central Mali with 23 family members to the camp outside the capital.

He pointed to the entrance of a round tent with a mattress and some pots inside.

"Imagine if someone in the family catches it," Barry said, referring to the virus.

The Sahel has been beset by war since 2012, when separatist rebels captured most of northern Mali and ignited a conflict which has since been overtaken by jihadists.

Fighting then engulfed the centre of Mali, and also spread to neighbouring Sahel states Burkina Faso and Niger. Thousands of soldiers and civilians have been killed to date.

But many more flee the violence, escaping to neighbouring villages or across nearby state borders in "the hopes that it will pass," according to Barry.

They mostly end up leading precarious lives in makeshift camps, depending on aid handouts.

Water is often scarce, food is delivered in occasional batches, and sanitation facilities are limited.

Coronavirus cases are also growing across the three Sahel states, where there are fears that governments are unprepared for large outbreaks.

Mali has recorded 47 coronavirus cases and five deaths to date; Burkina Faso, 364 cases and 18 deaths; and Niger, 253 cases and 10 deaths.

So far, authorities have yet to record a case in the camps, but the risk of wildfire contagion is high.

"Many people aren't even able to understand what coronavirus is," said Ibrahima Sarre, a humanitarian worker in a Bamako refugee camp, describing the difficulties of preparing for the virus.

None of the three displaced-persons camps around Bamako have protective facemasks or gloves, although an NGO has donated hand-washing kits and offered hygiene advice.

Kola Cisse, a member of an ethnic Fulani association, told a group of displaced people on Thursday that they should use their turbans instead of costly pharmaceutical facemasks.

"Every displaced person has one, it's part of our Fulani tradition," he said.

Sarre, the humanitarian worker, said a five-square-metre (54-square-feet) tent -- an area less than twice that of a king-size bed -- may in some cases house up to 15 individuals.

"People are forced to live together here by necessity," he said.

Jamal Mrrouch, the head in Niger of the French charity Doctors without Borders (MSF) in Niger, warned that the people living in such conditions are "extremely threatened" by the coronavirus.

Others remain more upbeat, such as Boukari Ouedraogo, the mayor of the town of Kaya in northern Burkina Faso, who contended quarantine measures "could preserve" the town from the virus.

Kaya is home to some 50,000 displaced people who fled violence in the surrounding countryside.

'God must help us'

Humanitarian workers are nonetheless warning that strict anti-virus measures are making it more difficult for them to reach people in need.

Sanitation is basic in many camps. By BOUREIMA HAMA (AFP)

Moussa Bougma, the spokesman for the UN's refugee arm in Burkina Faso, said that travel outside of the capital is now "very, very limited".

An NGO official in Mali gave a similar account. "We have slowed our activities down a lot," the official said.

Last week, the UN's World Food Programme (WFP) appealed for money to continue delivering aid during the pandemic, pointing out that the number of people in the Sahel driven from their homes is growing.

Barry, the bearded grandfather, is also calling for outside aid.

"Humanity must be united, we must help each other," he said. "God must help us".