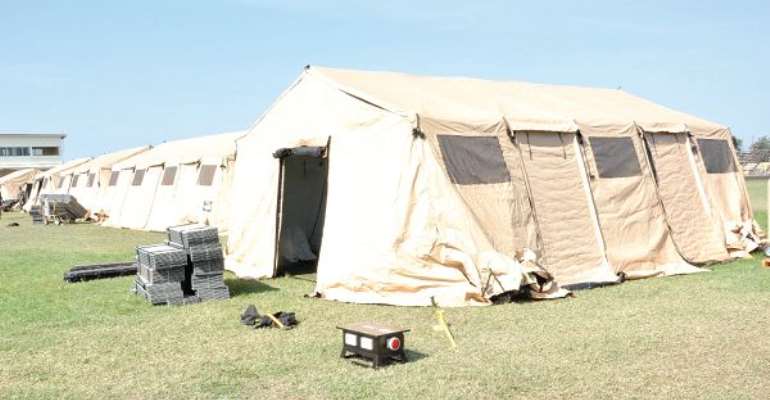 The Ghana Armed Forces (GAF) have deployed a mobile hospital at the El Wak Sports Stadium in Accra as part of their response to the COVID-19 pandemic.

The mobile (Level II Field Hospital) has all the facilities that a level two hospital has, including wards and intensive care units (ICUs).

It is one of two mobile hospitals that the US Ambassador, Ms Stephanie Sullivan, handed over to the GAF on February 4, this year on behalf of the United States government.

The donation was made through the US Government’s Africa Peacekeeping Rapid Response Partnership (APRRP) programme.

Medical staff
Sources at the GAF said the facility would have the full complement of medical staff, including specialists, adding that “it is staff from the 37 Military Hospital who are going to man the facility”.

They said the operations of the mobile hospital would be coordinated by the Ministry of Health, since it was part of the national efforts to combat the spread of the COVID-19.

Statement
Meanwhile, in a joint press release issued by the US Embassy in Accra and the GAF on April 1, 2020, Ms Sullivan underscored the importance of the two countries’ joint efforts to combat the pandemic.

“Now more than ever, the United States is pleased to work together with the government, armed forces, and people of Ghana. This mobile hospital will directly serve those most in need”.

She re-echoed President Akufo-Addo’s call for all Ghanaians to stay home as much as possible at this time, as that was one of the most effective ways to combat the pandemic and flatten the curve.

‘’Together, we will emerge from this stronger and more united,” she said.