COVID-19: Matters Arising And A Vindication… 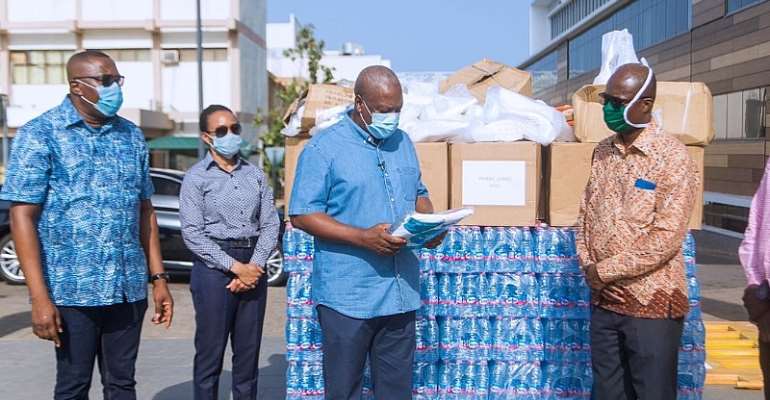 Lockdown in place and we are making the best of it as possible. In many respects, it is rather agreeable, especially the quiet that has descended over the land! Using my media credentials, I have driven round parts of Accra to monitor compliance and I noticed very encouraging signs. Ghanaians, it would seem, value our lives and would do what is necessary to stay alive, so we are by and large staying at home...No political point-scoring, just our common sense at play.

I know we will lick corona before long, that is, humanity in general. We have done that on many similar occasions in the past, but would we have learnt anything by the time it is over? Our fallibility, vulnerability and mortality as a species would not fail to once more be laid bare for us to learn from. In Ghana, there are already a number of eye-opening morality tales unfolding…

Very magnanimous because this is a man, whose party’s presidential candidate for Election 2020 and former President of the Republic is being targeted by the government’s special prosecutor to sabotage his chances. Magnanimous because this is a man whose party’s main media ally has been muzzled by this government with total closure. Magnanimous because all preparations towards Election 2020 by the Electoral Commission and National Identification Authority are very clearly strategized to make it difficult for his party to win the elections even before a vote has been cast and many other exhibitions of bad faith towards his party.

If he had turned down the invitation, he would have been standing on solid grounds of conscience, but his acceptance and appearance, with high profile representatives of his party, at the stakeholders meeting was an act of remarkable good faith and in line with devotion to flag and anthem. His speech was short and straight to the point and captured the spirit that was developing in Ghana but abruptly discarded on January 7 2017.

The meeting itself cannot be faulted but the initial negative reactions to the NDC initiative on Covid-19 by government operatives can be faulted. When the NDC announced the formation of an advisory task force, a top official of the national body tasked with coordinating efforts, savaged it as unnecessary – a nugatory, unhelpful partisan reaction, which the stakeholders meeting has now shown up to be short-sighted and destructive. The government has eaten humble pie by indirectly admitting that they cannot go it alone and other parties too have the men and women with equal abilities – probably even more accomplished!

The government must be feeling rather embarrassed with its churlish refusal to continue with health projects initiated by the Mahama Administration. And not only that, the refusal to allow those ready to come on stream can be described as a monumental disservice to Ghanaians. To play politics with health issues is to put everybody’s life at risk. And to treat a cathedral as a “priority of priorities” when hospitals are waiting to be finished or commissioned is a crime against the Ghanaian people.

Corona’s verdict on that is unequivocal. But surprise, surprise, as I was writing this commentary, news broke that they had, after almost four years in office, been compelled by corona to bring on stream the state-of-the-art Bank Hospital situated in Cantonments, Accra. Grudgingly and with all manner of excuses, this ultra-modern hospital which had been ignored by the NPP government is now being readied to quarantine VIPs! The Minister of Health, who announced this, tried to retract his VIP goof but the true intent had already been established and recorded! Using sophistry of language, he also came across as though they were bowing to popular pressure! Far from that. The Minister must instead be apologising to Ghanaians for leaving such investments to gather dust…

They made much song and dance of ambulances recently and gave the impression that the acquisition of a handful of ambulances from abroad was the greatest achievement or innovation of Ghana’s health care delivery system ever!

Let me make it clear: Ambulances play a vital role in emergency situations, no doubt about that, and we should order more of them, but to create the impression that they are somehow worth celebrating more than diagnostic and treatment facilities is to insult the intelligence of the public. That is like the proverbial putting the cart before the horse. An ambulance would be of no use if there is no medical facility to send a patient or accident victim to. The parade of ambulances was therefore yet another example of an African government trying to hoodwink the public into a false sense of medical security. And by the way, where are Bawumiya’s drones? We should see them whizzing about and criss-crossing our airspace in this time of need!

With this major health calamity looming, there is a crying need for more frontline medical facilities, like hospitals, isolation centres, clinics, laboratories – those kinds of investments the Mahama Administration made but were abandoned by those who took over in 2017.

Ghanaians as believers love to flaunt their credentials typified in our “Fama Nyame” attitude to life but one man’s worship could be another man’s noise. Significantly abated are the often raucous and cacophonous sounds purveyed by some places of worship. So what has happened? Unable to heal their flock or not wanting to attract corona’s wrath? There are seven places of worship, all packing huge congregants, within walking distance of my house – a kilometre or less – and boy oh boy, don’t some of them make quite a racket! But these past few lockdown days, bliss!

They have lost their tongues and voices, and with that, a soothing balm of peace and quiet is enveloping us. Meditation in peace and quiet is now possible. These places of worship, on any particular day, will sing and dance in praise at odd hours and not only on Sundays. And now a little organism has driven them out of their spaces. Even the roving preachers who would normally interrupt our well-earned sleep at 5.30 am with their “words of God” have retreated into corona hibernation.

This virus, a mere protein, has set in motion some serious introspection, raising many philosophical and existential questions. I do not ascribe to the extreme views of “contrarians” like the late Christopher Hitchens but I do find his position on science and the role it plays or should play in human affairs now being vindicated by corona. With all the lockdowns and empty places of worship, it is science we are all looking up to, to come up with a vaccine or cure. As we concede the supremacy of the Creator, those among us who have made an industry out of it are being made to look rather inept and have become the butt of irreverent jokes. The lampooning cartoons and wisecracks against them are now a regular fare on the social media.

In enjoying our constitutional freedoms of worship and assembly, it’s become free for all and for fear of being labelled “Abonsam” or being accused of going against the “word of God”, very few people dare voice their disapproval of certain practices. One group of citizens more petrified than most, but who are supposed to set limits for all of us to relate with each other, are politicians. Because they see ballots in all those congregations waiting to be harvested or lost they are hamstrung. Now, corona the leveller, is making us all think and behave as one in the eyes of God. In a way, through corona, He is speaking to all of us.

When things finally settle, instead of using our religious spaces to keep emphasising over and over which of our faiths is right or wrong and which will lead you to heaven or hell, we should use the space to preach the values that unite us all, the values that make us human, the values that can rally us to fight common threats to our common humanity. Now generally known as Faith-Based Organizations (FBO), they may wish to use the Covid-19 experience to rise above the parochialism of heaven and hell and let our humanity shine through. Time, therefore, to be truly each his brother’s or sister’s keeper. But for the time being – until a vaccine or cure is found – well, “yen fama Nyame”.

And there’s also this little matter of personal hygiene, especially hand washing, which must under no circumstance be allowed to elapse after corona. Our handshaking culture is one of our defining traits. Funerals, outdoorings, churches, mosques, just about anything that brings people together also require a mind-numbing number of handshaking. Handshaking is such a required social protocol that some ethnic groups have developed the formula of greeting from right to left, flouting of which can attract serious sanctions. We are also notorious for nose picking, sneezing/coughing into our palms and other practices better left unmentioned. Handwashing and use of sanitisers must of necessity be retained even when corona eventually disappears.

Here, Muslims have a head-start because the five daily prayers require thorough washing of hands, mouth, nose, face, arms, head, ears and finally feet – a mini bath – before prayers. It is also a must to use water if the toilet or urinal has been used. With sanitisers, this will be the way to go for all of us. But there is a catch; where sanitisers are concerned, some of them are alcohol-based and may not appeal to Islamic practices, but a way, I am sure can be found…

With these matters arising and others to come, and as we prepare to reboot after corona, what of conceding a…

This may seem not to be the time for gloating or whingeing, but there is no right or wrong time, to tell the truth. When President Mahama left office in January 2017, the vilification was persistent, cruel and merciless. The incoming government had saturated the media – the airwaves, big and small and their print media surrogates, with the falsity of incompetent performance by Mahama’s government, and orchestrated a jingoistic frenzy of praise singers in the media of larger-than-life promises of a better Ghana and over-hyped persona of the man taking over from Mahama!

But four years on, all the infrastructural developments of the Mahama era stand tall and are by and large what Ghana has to show in terms of development these past 8 years. They cannot deny their existence nor can they airbrush out the stature of John Dramani Mahama as a performing president.

Now, what do we see? The Bank Hospital, a Mahama era top-notch hospital has been called into the service of Covid-19. There are many other establishments of different categories that will keep popping up because forward-looking infrastructural investments were made quietly by Mahama. The evidence of his competence is gradually being laid bare. Did they have to wait for a pandemic to open their eyes and ears?