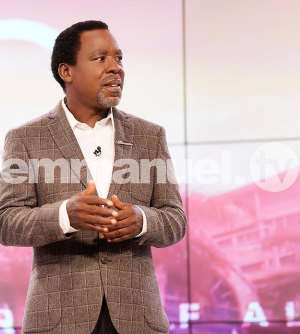 Nigerian Pastor TB Joshua has waded again into the controversies surrounding the dramatic spread of COVID-19 and the extreme measures implemented by leaders worldwide to contain it.

“World leaders and scientists know what they are doing; that is why they keep promoting fear and panic,” the cleric revealed in an ‘exclusive interview’ posted to Emmanuel TV’s official YouTube Channel with over 1.6 million subscribers.

Joshua derided the death toll count from the disease daily splashed across the worldwide media, adding that such mortality stats were never highlighted prior to the arrival of the virus.

“They know the gravity of the situation. The whole thing has to do with error in advanced technology," he continued, insisting that he was not a scientist or politician and only spoke as “directed by the Holy Spirit”.

“Now innocent people are dying, especially the elderly. Nothing is worth the blood of innocent souls. There is no acceptable excuse for doing this,” the cleric decisively declared.

He went on to warn of “God’s anger” if world leaders didn’t take proactive measures to help “displaced people” from “troubled spots” such as Syria.

Several other topics were discussed with Joshua including his ‘humble beginnings’ and the ‘persecution’ that his ministry has attracted since inception.

“If something big starts big, it calls for concern,” he counselled. “There is time for everything – a time to be born, a time to grow, a time to face persecution and a time to reap the fruit of your labour. Any life that does not follow this process is bound to face obstacles that can either stop you or destroy you in the middle of the journey or late on the journey of life.”

He stressed that the impatience of today’s generation has led many to make rash decisions too quickly which later prove detrimental.

Joshua finally called on his ‘partners’ to support those “most affected” by the lockdown instituted in multiple nations to try and curb the coronavirus spread. “In a world that cares less, we should care more,” he advised.

Joshua was recently derided on social media after a short clip of his declaration that coronavirus would end by 27th March 2020 went viral, although it was later clarified he was actually referring to the epicentre of the outbreak in Wuhan, China.

In his much publicized ‘prophecy’ for the year, Joshua described 2020 “the year of humility”, adding that the world would be humbled by “affliction” and face serious “economic backlash”, leading many supporters to link his words to the currently unfolding events.