Heeding to the President's Call by Supporting my People - Dr. Nana Ato Arthur 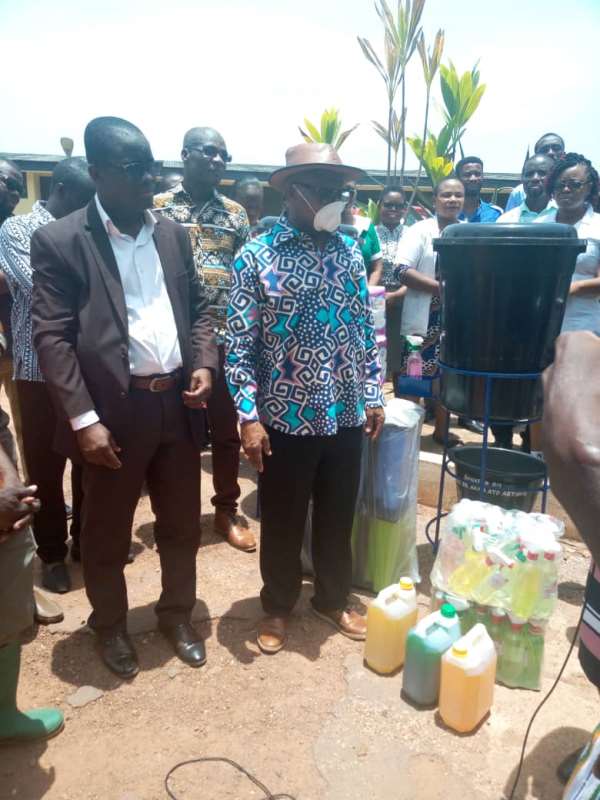 The head of the Local Government Service Ing. Dr. Nana Ato Arthur has donated 50 Veronica buckets, 20 metallic stands, 250 gallons of liquid soap and 40 pieces of tissue paper rolls to the Municipal Health Directorate of the Komenda Edina Eguafo Abrem. The items were delivered at the Elmina Polyclinic.

During the presentation, Dr. Nana Ato Arthur expressed gratitude to the constituency for the tremendous support for him and the show of love. The gesture he explains is not only to adhere to the call of the president but also an opportunity for him to give back to the constituency in such difficult times. According to him, he has received a distress call by someone in the constituency he doesn’t know and therefore feel obliged to assist such people in his own small way. Recounting his journey so far, Dr Ato Arthur, said he had the opportunity of being DCE, Deputy Central Regional Minister, Central Regional Minister and now the Head of Local Government Service following the trust and confidence reposed in him by the people of KEEA, an honour he stressed will never forget. He further added that the constituency crowned him by electing him to represent them in Parliament.

Dr Nana Ato Arthur, "the gesture is in response to the presidents call for all to support the state in this trying times because these are not normal times". He expressed the hope that his "widow’s mite would help fight the coronavirus pandemic. The items are meant to be distributed to the following health facilities: Elmina Polyclinic, Kissi Clinic, Abirem Agona Clinic, Komenda Clinic, Elmina Police Station, Elmina Chief Palace and Two Lorry Stations within the Municipal Assembly.

Mrs Catherine Ampah-Brient, the Municipal Health Director took delivery of the items on behalf of the health directorate. She thanked Dr Nana Ato Arthur for his kind gesture and said they would be happy if "he can assist in helping them secure nose mask and other medical equipment to help in health delivery". She further took the opportunity to appeal to philanthropist to come to their aid to help furnish their theatre.

Dr Felix Darbbey, the acting Medical Superintendent of the Elmina Polyclinic also expressed his appreciation for the kind gesture. According to her getting such items as frontline institutions serves as an encouragement to them to give off their best because they have such items to protect themselves. In his words “sick health professionals reduce the staff strength and that isn't good enough.”

Don't worry yourselves contributing Ghc100 to support Nation...
48 minutes ago