'Stay home during Holy Week': Italy authorities insist lockdown is not over 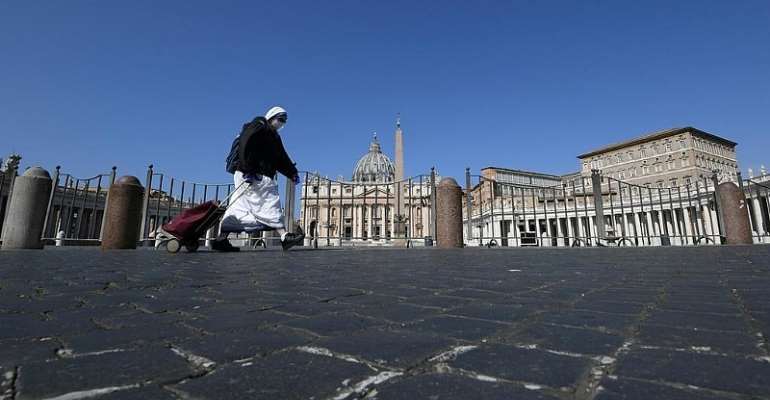 Italian authorities are becoming stricter than ever as the country enters its fifth week in lockdown in the wake of the coronavirus pandemic. There are concerns that people will get complacent, as the fatality rate from Covid-19 begins to decrease.

Italians had been hoping that the coronavirus lockdown restrictions would be eased for Holy Week and Easter. But that is not going to happen. In fact, police checks have become even more stringent out of fear that people will take advantage of the good weather and sunshine and decide to go to the countryside or to the seaside.

The civil defence department reported that while still high, at 525, the daily death rate dropped to its lowest in over two weeks. But authorities want to ensure Italians keep up their efforts: they have been issuing more and more fines to those found to be outside without a valid reason.

Prime Minister Giuseppe Conte, Health Minister Roberto Speranza and officials at the civil defence department stress that now is the time to be even more careful – to make sure the downward curve stabilises. They have repeated constantly that the restrictions in movement and the ban on public gathering is bearing the desired fruits.

Even the number of patients in the intensive care units in the north has been coming down. In Lombardy, the worst-hit region, authorities said they would no longer need to move those needing the treatment to other regions.

Meanwhile, Pope Francis celebrated Palm Sunday at the Vatican, opening up a Holy Week the like of which has never been seen: no crowds to be seen in Saint Peter's Square and no faithful waving palm fronds and olive branches.

A solitary Pope Francis with a few collaborators celebrated the service inside an empty Saint Peter's Basilica. His audience saw the event on television and streamed on the Internet.

Solitary Stations of the Cross

It will be no different for the rest of the Holy Week services this week. They will all be held indoors except for one event on Good Friday, the day the Church recalls when Jesus died on the cross. Normally tens of thousands attend a solemn candle-lit procession at Rome's ancient Colosseum.

This year, Pope Francis will celebrate the Way of the Cross on his own in front of an empty Saint Peter's Square, in much the same way as he did last week when he delivered an extraordinary Urbi et Orbi message.

He told the millions of faithful, watching on television and online, that at this time of coronavirus pandemic, “We have realised we are in the same boat, all of us fragile and disoriented, but at the same time important and needed, all of us called to row together, each of us in need of comforting the other.”

All eyes and hopes will be on the Pope on Sunday for his Easter message to the world.