Cameroon president under fire for silence as pandemic looms 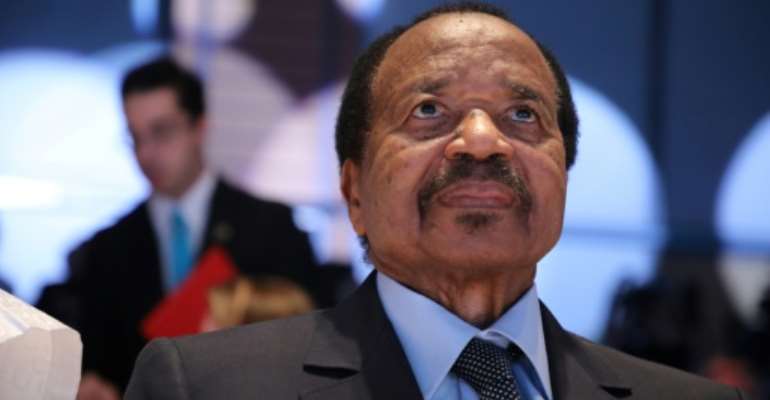 Cameroon President Paul Biya, shown here in 2019, has not addressed the nation since the first COVID-19 case was recorded a month ago. By Ludovic MARIN (AFP/File)

Cameroon's aged president is coming under fire for his absence from the national stage as the central African country faces a burgeoning coronavirus crisis.

A month after the first case of COVID-19 was recorded, 87-year-old Paul Biya has yet to address the nation -- a silence that for supporters is a sign of gravitas but for critics one of failure.

According to official figures posted early Monday, Cameroon has 658 cases of the virus, with nine deaths, making it the second most-affected country after South Africa in sub-Saharan Africa.

Cameroon is already waging two violent conflicts, one against Boko Haram jihadists in the north, the other against English-speaking separatists in the west.

The fighters in the new front are doctors and nurses who are woefully lacking in masks and breathing equipment.

In his 37 years in power, Cameroonians have become accustomed to Biya's long absences, mainly because of poor health, but his silence over the pandemic is raising sharp questions.

He posed for the cameras after talks with the US ambassador on March 11, but did not speak to the press.

Six days later Biya urged Cameroonians on Facebook to "respect" measures taken to combat the virus, but since then there has not been so much as a whisper from a leader who has overseen many crises since he took power in 1982.

Biya 'cannot be pinned down'

Biya's track record suggests he is not a major communicator in the best of times, making just three or four appearances a year. But for researcher Stephane Akoa, "In a context like this, the presidential message is important."

Last week, speculation mounted on social media that Biya could be dead, prompting a formal public denial by Communications Minister Rene-Emmanuel Sadi, who insisted that Biya was "going about his official business as normal".

But there was no word from the president himself, provoking a sharp attack from main opposition leader Maurice Kamto, the runner-up to Biya in 2018 elections.

Opposition leader Maurice Kamto says Biya must speak or the people will 'see his failure'. By STEPHANE DE SAKUTIN (AFP/File)

On Friday, Kamto demanded that the president address the nation within seven days, otherwise "the people... will inevitably see his failure".

Oswald Baboke, the president's deputy chief of staff, commended Biya's "wisdom... (and) restraint," writing in the press that "the President's Time cannot be improvised and cannot be pinned down."

Thus far the youthful health minister, Malachie Manaouda, has been the point man for the coronavirus crisis, tweeting out frequent updates and detailing the government's response.

But criticism has grown louder with the rise in known cases from 142 to 658 in a week.

"Government communication is weak, its response was late and in some respects poorly prepared," said Stephane M'Bafou, a consultant in public management and governance.

"There is an obvious lack of coordination," said economist Albert Ze.

Prime Minister Joseph Dion Ngute on March 13 announced measures such as closing borders and a ban on rallies, which have been extended.

The one new step since then, attributed to Biya but announced by Ngute, has been the creation of a solidarity fund worth one billion CFA francs (1.5 million euros / $1.65 million).

Others say the response does not go nearly far enough.

"We must quickly declare a curfew, isolate the cities where cases are confirmed and move towards a general containment regardless of the socio-economic cost," said M'Bafou.